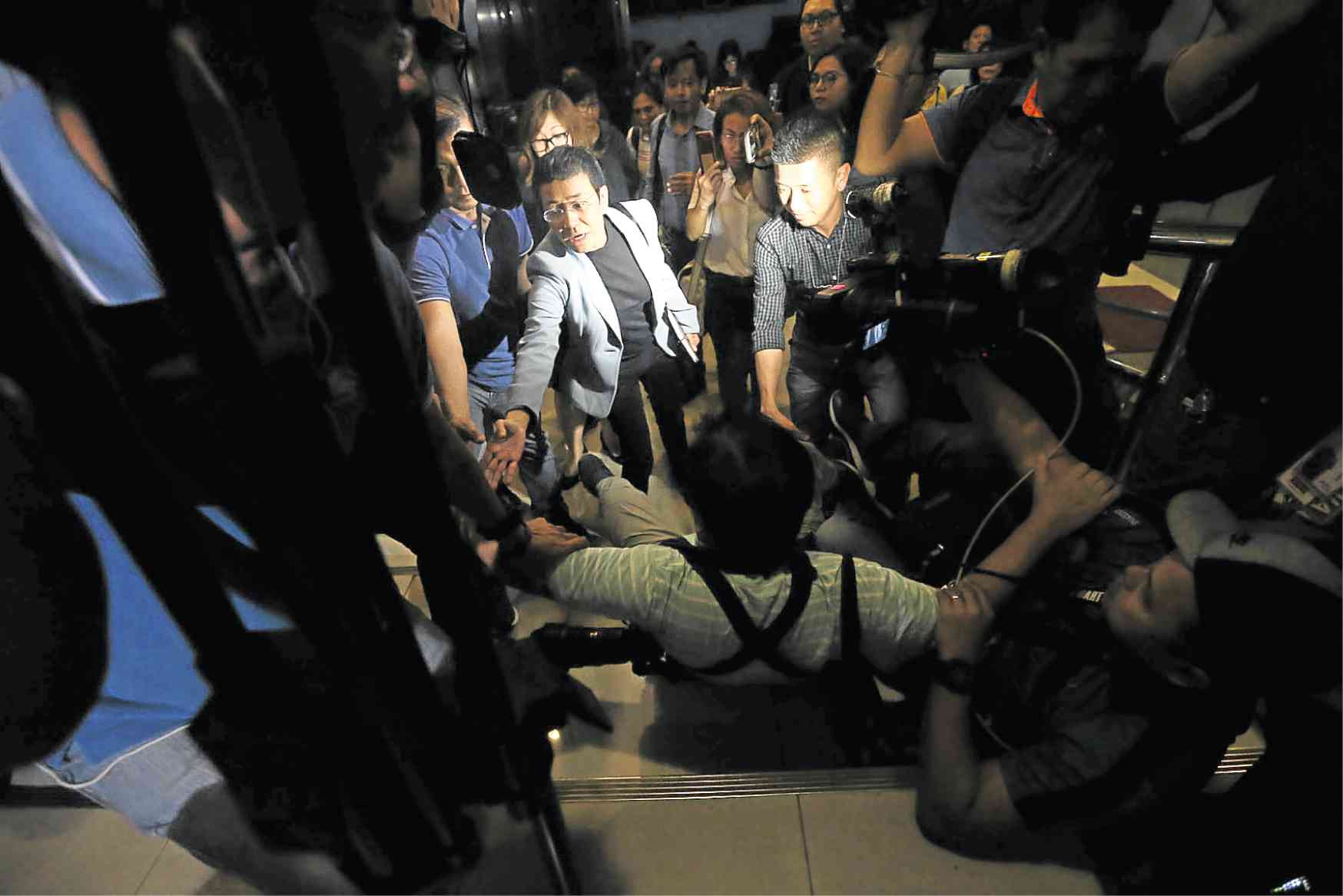 TRAVESTY OF JUSTICE“I have run out of synonyms for ridiculous, ludicrous. I think this is a travesty. It’s a benchmark,” Rappler CEO Maria Ressa tells journalists after her arrest for cyberlibel. -EDWIN BACASMAS

Maria Ressa, the CEO of online news site Rappler critical of the Duterte administration, was arrested after office hours on Wednesday in connection with a cyberlibel complaint filed against her by a businessman.

Rights advocates called her arrest an act of “persecution.”

READ: LOOK: The SUV that launched the libel suit against Rappler

The arrest warrant did not state recommended bail, according to Ressa’s lawyer, JJ Disini.

“People should know that a line was crossed,” Ressa said, after she arrived at the National Bureau of Investigation headquarters on Taft Avenue in Manila on Wednesday evening.

“We are going to new lows … We should be worried,” added the Rappler CEO, who was one of those named Time magazine’s “Person of the Year” in 2018 for journalistic work.

Malacañang advised Ressa to concentrate on her defense.

“The case against Maria Ressa is not based on any violation of press freedom. Simply, she committed a crime and the court finds probable cause,” presidential spokesperson Salvador Panelo said.

Disini said Ressa might have to stay overnight at the NBI.

“She’s supposed to bail tonight but we are unable. So the option is I guess she is to spend the night at the NBI. She will be detained at the NBI for the rest of the evening,” he said.

NBI agents entered the Rappler office at Capitol Commons Center in Pasig City despite the arrest warrant having been issued on Feb. 12.

“It’s a shock,” said Ressa, who maintained a steady, calm composure as she was escorted through a crowd of reporters out of the newsroom.

She later stopped to say that it was “really interesting” that an arrest warrant had been issued even though she had not been given a copy of the Department of Justice (DOJ) indictment or a chance to file a motion for reconsideration.

Expressing dismay that the rule of law had been “broken,” Ressa reiterated that she would follow the NBI agents to their headquarters.

Her detention is a dramatic escalation in the legal pressure bearing down on Ressa and Rappler, which is facing tax evasion charges that could shut it down.

Rappler has drawn the Duterte administration’s ire since publishing reports critical of President Rodrigo Duterte’s signature antidrug crackdown that has killed thousands of alleged users and pushers since 2016.

The new case against Ressa stemmed from a report in May 2012, even though the law she allegedly violated was approved in September that year.

Five years after the story’s publication, Keng filed a complaint against Santos, Ressa and six members of Rappler’s board of directors under the Cybercrime Prevention Act of 2012, which the NBI had dismissed since the article was published before the law was enacted.

But in January 2019, the DOJ revived the charges against Ressa and Santos, as well as Rappler, since it said the news article was updated in February 2014, and was therefore actionable.

Darwin Angeles, one of Ressa’s collaborating counsels, told reporters on Wednesday that his client was well and he would “make sure her rights are protected.”

Ressa was previously arrested on Dec. 3, 2018, after a Pasig City Regional Trial Court issued a warrant in connection with tax evasion charges. She posted P60,000 bail the same day, however.

On Wednesday, Ressa was scheduled to speak about press freedom at the annual University of the Philippines fair in Diliman, Quezon City.

In place of her speech, the festival organizers emblazoned “Justice for Maria Ressa” on screens surrounding the stage, and planned a moment of silence for the journalist at 10 p.m. 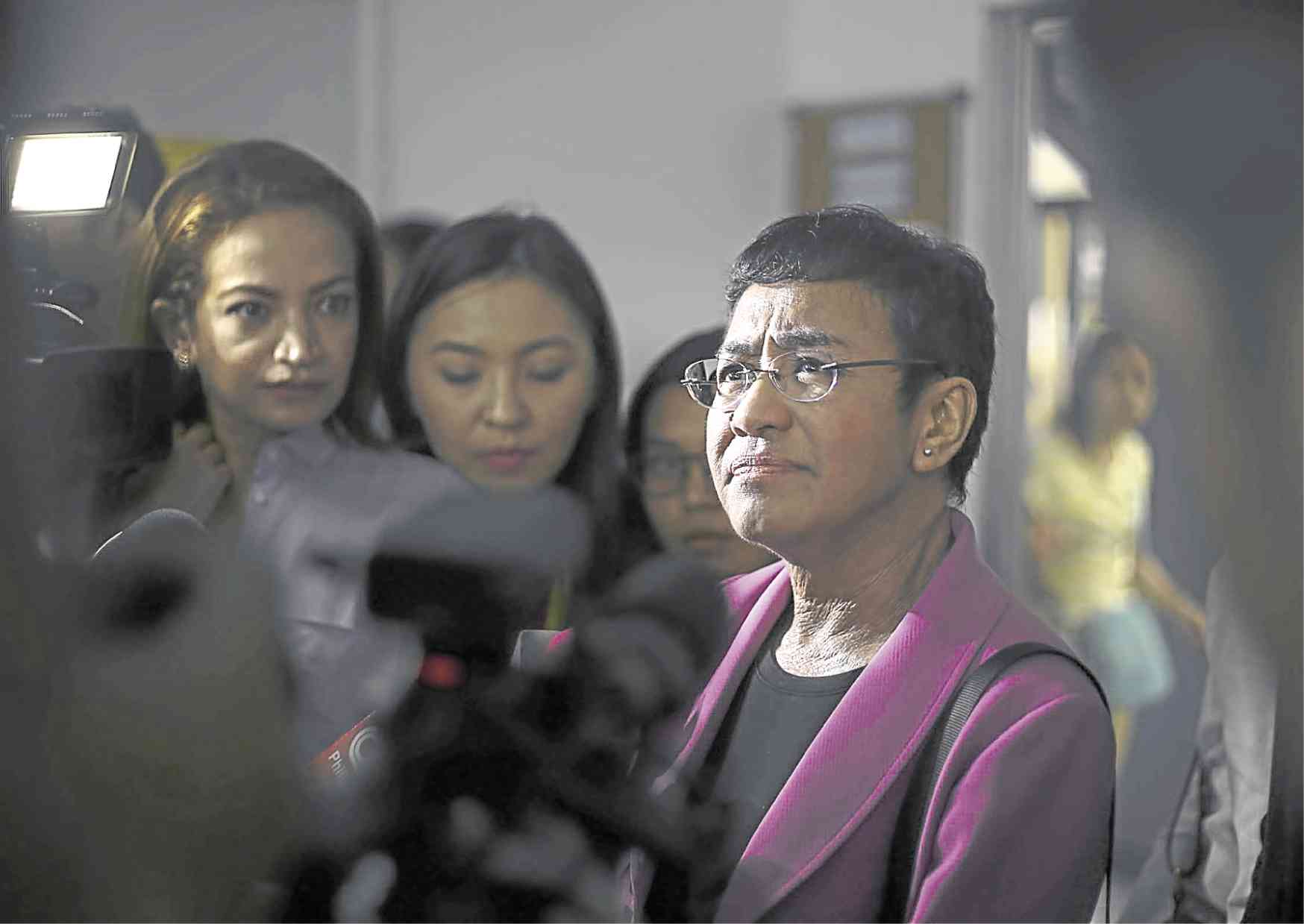 “The arrest of … Ressa on the clearly manipulated charge of cyberlibel is a shameless act of persecution by a bully government,” said the National Union of Journalists of the Philippines (NUJP).

“The government … now proves it will go to ridiculous lengths to forcibly silence critical media,” the NUJP added.

In a tweet, Reporters Sans Frontiers said it “firmly condemns authorities harassment against [Ressa] and the media.”

In a statement, Let’s Organize for Democracy and Integrity (Lodi), an alliance of media and arts workers, condemned the NBI for the late afternoon arrest.

Lodi said the charges were trumped-up and politically motivated.

The President has lashed out at other critical media outfits and has threatened to go after their owners over alleged unpaid taxes or block the network’s franchise renewal application.

Under the tax case, the DOJ, acting on a complaint from the Bureau of Internal Revenue, in October last year indicted Ressa and Rappler for attempting to evade taxes by not reporting gains of P162.4 million from the issuance of Philippine depositary receipts (PDRs) to two foreign companies in 2015 and for failing to file tax returns.

PDRs refer to derivative instruments that are based on the value of equities as underlying assets but don’t grant ownership to the holder.

In Rappler’s case, however, the Securities and Exchange Commission said the PDRs issued to Omidyar Network gave the foreign entity sufficient control even without having actual ownership.

Omidyar, which owned the controversial investment in Rappler, announced in April 2018 that it had donated its interests to 14 Filipino managers of the news site. —With reports from Patricia Denise M. Chiu, Christine O. Avendaño and AFP