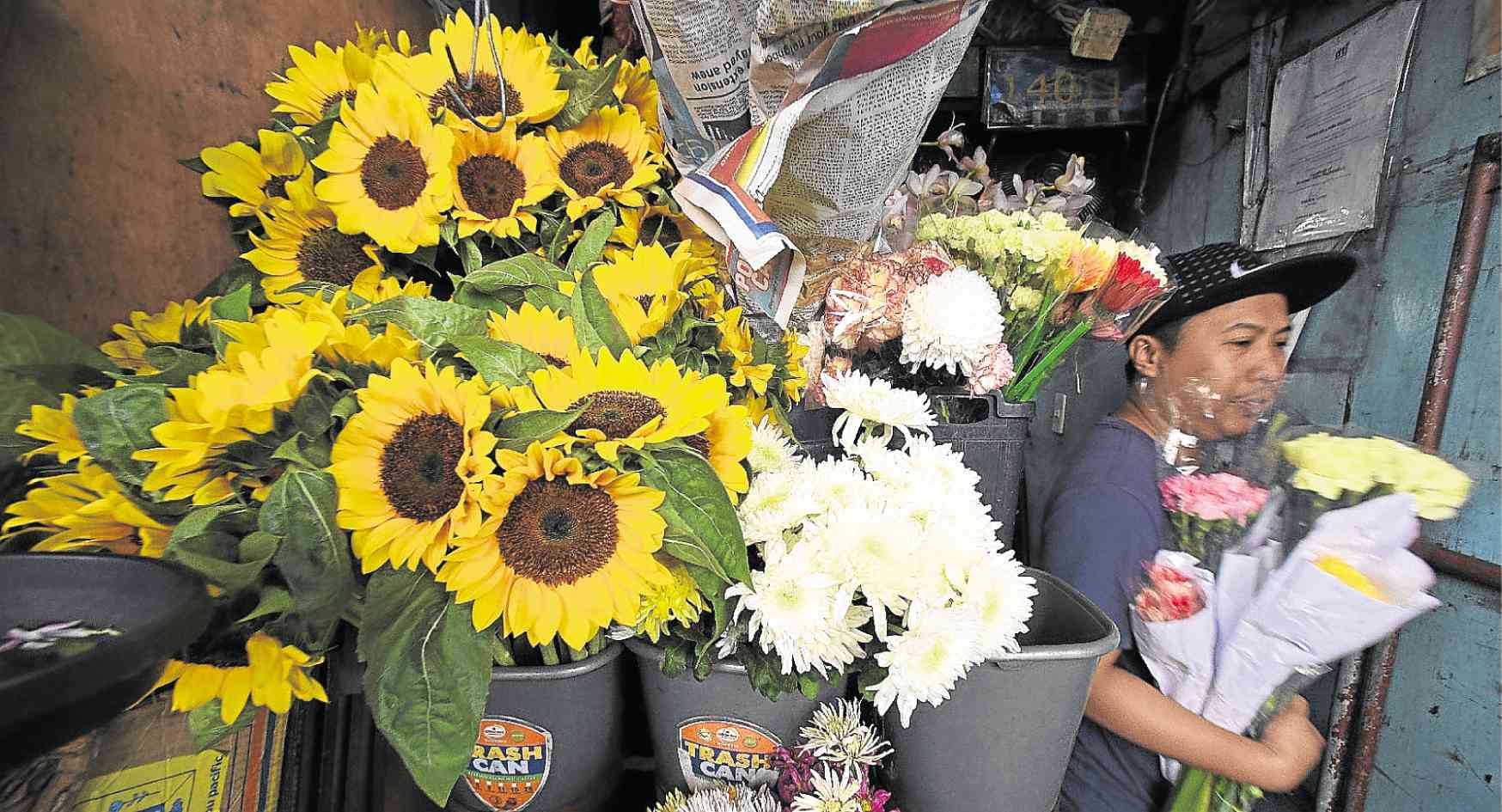 DAY OF LOVE ICON Flower shops in Baguio City report brisk sales of sunflowers, which are priced the same as red roses, ahead of Valentine’s Day on Thursday. —EV ESPIRITU

BAGUIO CITY — This Valentine’s Day, say it with sunflowers. They last longer, they’re cheaper and make a bigger splash than roses, the traditional flowers given on the day of love.

Flower vendors in this city have observed the trend toward giving sunflowers on Valentine’s since last year, when the demand for the yellow symbol of the Panagbenga festival surged because of price concerns.

Sunflower stalks cost from P50 to P100 each, while red roses cost about P1,200 for a bundle of two dozen flowers.

Virginia Rillera, 65, who manages a flower shop at the Maharlika Livelihood Center, said that last year, sunflower growers failed to produce enough supply to satisfy the increase in demand.

Rillera said she managed to sell only 50 stalks of sunflowers before she ran out of stock.

“Most cut flowers are being grown at Barangay Bahong in La Trinidad, Benguet, and larger areas are now devoted to sunflowers to meet rising demand this year,” Rillera told the Inquirer.

Ligaya Pumihic, who delivers and sells flowers at the Dangwa bus terminal in Manila, said more young people were buying sunflowers instead of roses.

“At retail shops, red roses and sunflowers are sold around P100 apiece, but the sunflower is bigger,” Pumihic said.

Flower shop owner Estela Dumas, 54, said sunflowers were now coming in varieties, with the most popular being the “full sun” variety with a dark brown disk florets or corolla.

Gina Aromin, 54, who owns Aromin Orchids and Anthurium, said a bouquet of sunflowers in her shop cost from P250 to P500.

In Washington, single women are celebrating each other on Galentine’s Day on Feb. 13, instead of feting romantic love on the 14th.

Galentine’s Day was born in 2010 during an episode of the American sitcom “Parks and Recreation,” when main character Leslie Knope (played by Amy Poehler) hosts a brunch on Feb. 13 for her best gal pals.

It was conceived as a defiant response to Valentine’s Day a statement that the traditional romantic love is not the only kind worth honoring.

“I’ve organized this giant group FaceTime with all my closest girlfriends. All of us are going to get on the phone and celebrate each other,” said Riya Patel, a 22-year-old research analyst from the US capital.

“Women are just so pummeled throughout their upbringing with this idea of romantic love imagery, and what it means to be in love,” said Olivia Dillingham, a brand consultant for women in New York.

“That creates this sense of unworthiness and failure when you come around to Valentine’s Day and you don’t have someone to go to dinner with,” Dillingham added.

From being a semijoke, Galentine’s Day has grown into a semiserious holiday and it’s generating big bucks, with many businesses selling themed products, cards, wine glasses, candies, cookies and jewelry.

Big box stores have dedicated sections for the event. Bars and restaurants are organizing happy hours and parties.

“It started out as very shallow,” Patel said. But now, “it feels bigger than just celebrating female friends. It’s a day to reflect on people who support you in your life.” —With a report from AFP

Read Next
Rappler CEO arrested; no bail recommended
EDITORS' PICK
Leveling up your ‘lutong bahay’ with the kitchen companion you never knew you needed
‘I am a natural-born Filipino’ — Gabby Lopez
PNP charges 301 village execs for corruption in SAP cash aid payouts — DILG
Cherry Mobile teams up with Cloud Panda PH, launches online store
Recall of VFA abrogation won’t affect senators’ petition at SC — Drilon
ABS-CBN’s Gabby Lopez attends House franchise hearing
MOST READ
MMDA to sue, slap P1,000 fine on bike group
Lopez: ‘I would renounce my US citizenship in a minute if needed’
Calida ‘just the lawyer, not the client’ and must ‘never lose his cool’ – Macalintal
MMDA: Commuters to blame for chaos
Don't miss out on the latest news and information.

Lopez: ‘I would renounce my US citizenship in a minute if needed’