LOOK: The SUV that launched the libel suit against Rappler |

LOOK: The SUV that launched the libel suit against Rappler 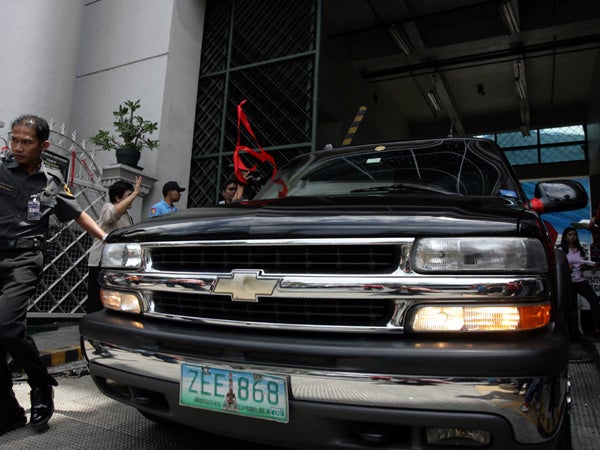 “His black Chevrolet Suburban, a sports utility vehicle he used to travel to and from the Senate – when he appeared on May 22 and 25 before the impeachment court – is being linked to questionable transactions and persons,” Santos reported in his article “CJ Using SUVs of Controversial Businessman.”

The report went on saying: “Between 2010 to 2011, a Newsbreak investigation (prompted by a tip that a litigant with a case pending before the Supreme Court was allowing him use of an expensive vehicle) found that plate number ZWK 111 was registered under the name of Wilfredo Keng, a Filipino-Chinese businessman dubbed by Forbes Magazine as one of the richest Filipinos in 2010.”

According to Santos’ report, the investigation was also part of research for Marites Dañguilan-Vitug’s upcoming book on the High Tribunal.

Keng broke his silence. While the businessman admitted ZWK 111 was his, he stressed he doesn’t own the SUV Corona had been using.
Rappler said its sources at the Supreme Court revealed that they had seen Corona regularly use the black Suburban owned by Keng in both official and non-official functions in 2011.

“It is unclear how a plate number under Keng’s name ended up being used by Corona. The luxury vehicle is not the one assigned to him by the Supreme Court as his service car. His assigned vehicle is a beige 1996 Toyota Camry with plate SEJ 953,” said Santos’ report./ac