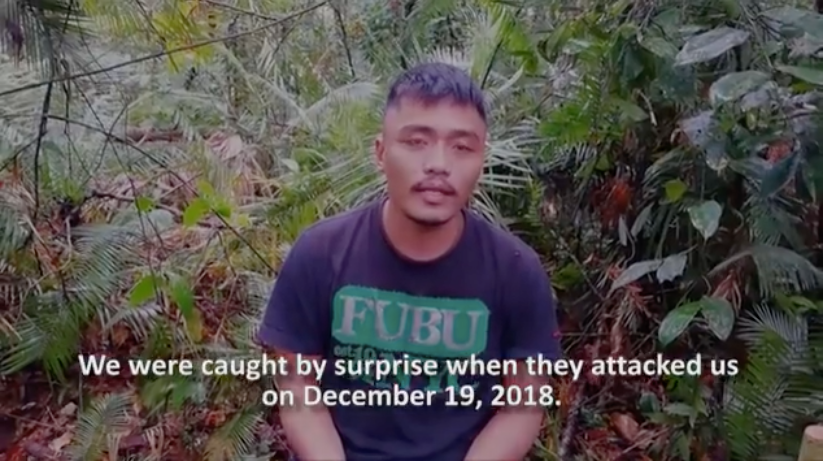 Private First Class Darlino Carino Jr. of the 3rd Special Forces Battalion (screengrab from a video released by the NPA).

MANILA, Philippines —  One of the soldiers held captive by the New People’s Army in Agusan del Sur is appealing to President Rodrigo Duterte to suspend military operations and pave the way for their eventual release.

“To Mr. President Rodrigo Duterte, all I ask is to have our release expedited through a cessation of military operations,” said a soldier who was identified in a video released by the NPA as Private First Class Darlino Carino Jr. of the 3rd Special Forces Battalion.

“That is all I ask so that I could be with my wife and child, also because our wedding anniversary nears,” he said in Filipino.

Carino was one of the two soldiers and 12 militiamen who were captured after communist rebels overran a military detachment in Sibagat, Agusan del Sur last December 19.

“They are kind to us. They did not hurt us. We eat what everyone eats, nobody takes advantage,” he said.

He also pleaded to his commanding officer as Maj. Muana and priest Fr. Eddie Dumalig to help speed up their release.

Carino also told his loved ones not to worry about him because he is safe.

Eastern Mindanao Command Lt. Gen. Felimon Santos, meanwhile, said they are continuing their operations to rescue the soldiers but reiterated that they will not negotiate with the NPA, whom he tagged as “terrorists.”

“We will not negotiate with the terrorists. The terrorists can release them if they want to without giving any condition,” he told reporters.  /muf