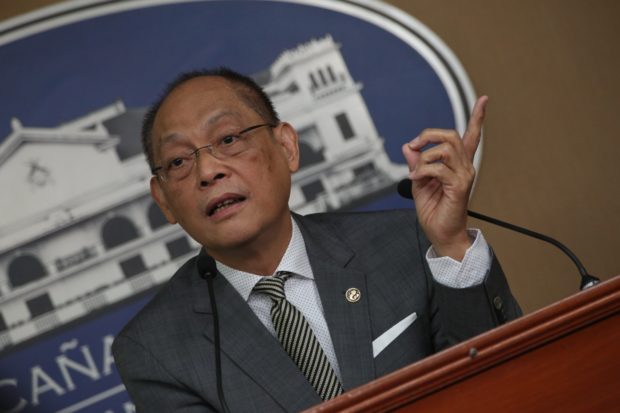 Diokno issued the dare after Andaya claimed that contractors already paid “commissions” or “cash advances” for infrastructure projects under the P75 billion additional budget of the Department of Public Works and Highways (DPWH) for this year.

Andaya and Sen. Panfilo Lacson have branded the additional DPWH funds as “insertions” or “pork.”

Andaya claimed that “favored contractors” were “upset” that their cash advances were “put to naught” after the Senate and the House of Representatives deleted the P75 billion in the spending bill.

The lawmaker earlier accused Diokno and Cabinet Secretary Karlo Nograles of seeking to restore the P75 billion to “appease” contractors who already paid 10 percent to 20 percent in kickbacks to proponents.

Diokno said Andaya should name the official and other personalities who received kickbacks as cash advances so that these could be investigated for “very clearly graft.”

“It seems Andaya has appointed himself spokesperson of these contractors who have already given commissions. Let me remind the congressman that giving commissions is very clearly graft,” Diokno said in a statement.

“It is his duty to name the high-profile government official he mentioned who advanced his own funds to a contractor because of expected commissions,” he added.

Diokno pointed out that the Department of Budget and Management (DBM) was only in charge of crafting and overseeing the budget process.

It is not involved in the implementation of projects or bidding and awarding to contractors.