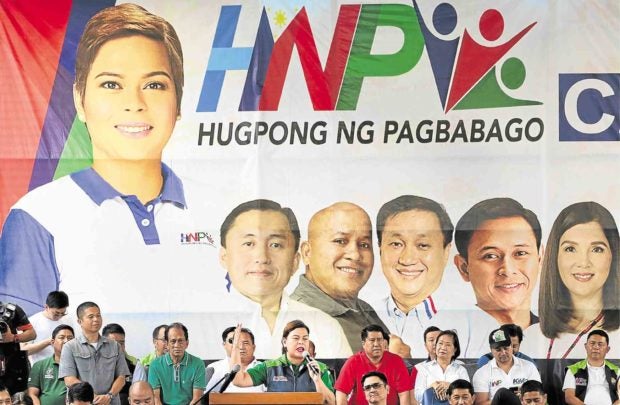 President Rodrigo Duterte was nowhere to be found when senatorial candidates supporting his administration launched their campaign on Tuesday in vote-rich Pampanga, a province that gave him a “landslide victory” in 2016.

But his daughter, Davao City Mayor Sara Duterte, attended the campaign kickoff of senatorial aspirants of her political party, Hugpong ng Pagbabago (HNP), in the City of San Fernando.

The rally drew some 20,000 people and stalled traffic around the venue in the Pampanga capital.

Mayor Duterte told Inquirer.net that her father would not be present during the event, saying he had more important things to do as President. “He will just have selected campaign sorties,” she said.

The President has 11 candidates on his own senatorial slate, one short of the 12 Senate seats being contested in the May midterm elections. A total of 62 candidates are hoping to become members of the legislative chamber.

Mayor Duterte formed HNP, a regional party, in 2018 to support her father. She was reported to be instrumental in convincing lawmakers to back Rep. Gloria Macapagal-Arroyo for the House speakership, though both refused to confirm this.

Arroyo urged her province-mates to give the HNP candidates an overwhelming victory like what they did for Mr. Duterte.

Revilla and Dela Rosa drew the loudest cheers during the rally.

“Ipaglalaban ko kayo (I will fight for you),” Revilla told the crowd.

He did not say how, but the actor-turned-senator lamented his detention that lasted four years and six months over a plunder case in relation to the billion-peso Priority Development Assistance Fund (PDAF) scam in 2014.

Mayor Duterte defended the party’s endorsement of Revilla and Estrada, another former senator implicated in the PDAF scam.

“Senator Bong was acquitted. Senator Jinggoy has posted bail so there is no finality in his case,” she told reporters.

“Once the court found a person guilty, then that’s the only time we can judge that person,” she added.

Senators who are running for another term will not always be too far away from each other even though Congress’ session may be over as they intend to campaign together in the next few weeks.

Those belonging to the majority have planned several rallies together, including the first to be held today, Wednesday, in Tondo, Manila.

Sen. Grace Poe, who is organizing the event, will be joined by Senators Angara, Pimentel, Villar, Ejercito and Nancy Binay.

Angara said he and his colleagues, who belong to different political parties save for Poe who is running as an independent, would try to campaign together several times a week to make full use of resources.

“It is cheaper and easier to mobilize people and resources if we do it together, versus doing it individually,” he said in a text message. “We have done it before with good results.”

Poe said Villar would host a rally for them in Las Piñas City, the Villars’ bailiwick, later this month.

Former Sen. Sergio Osmeña III, who is staging a comeback in the Senate, may join them, too, she said.

During the HNP launch, the local party Kambilan gave Mayor Duterte a symbolic key while Hugpong handed it a wooden insignia before Arroyo, Gov. Lilia Pineda and Vice Gov. Dennis Pineda raised the hands of the senatorial candidates.

Lorena Manarang, 44, from Guagua, said she came to the opening salvo to listen to what the senatorial aspirants wanted to say.

She said she liked those with programs on health and agriculture like what Villar offered.

In Baguio, the city council on Monday approved a resolution allowing candidates to join the street dancing parade of Panagbenga, or the Baguio Flower Festival next month. —With a report from Vincent Cabreza

Read Next
No letup vs Chinese ‘taho’ thrower: Deportation, assault raps readied
EDITORS' PICK
PH preps for China virus: Question of when, not if
Beyond water service: Maynilad builds massive infrastructure projects to clean up Metro Manila waterways
Museums ‘put to sleep,’ churches closed amid volcano’s unrest
Seventh judge assigned to handle De Lima case
SM continues to send relief assistance to remote towns in Batangas
Get exciting deals and discounts when you download the new McDonald’s App
MOST READ
Taal Volcano flexes signs of restiveness anew
Passengers from Wuhan, China to be flown out of Kalibo, Aklan – CAAP
Lacson on Duterte’s threat to end VFA over Bato’s canceled visa: Where is the connection?
Part of Aurora Boulevard in Cubao closed from Jan. 25 – Feb. 1
Don't miss out on the latest news and information.