#LaborVote2019 campaign launched to push labor issues in May polls 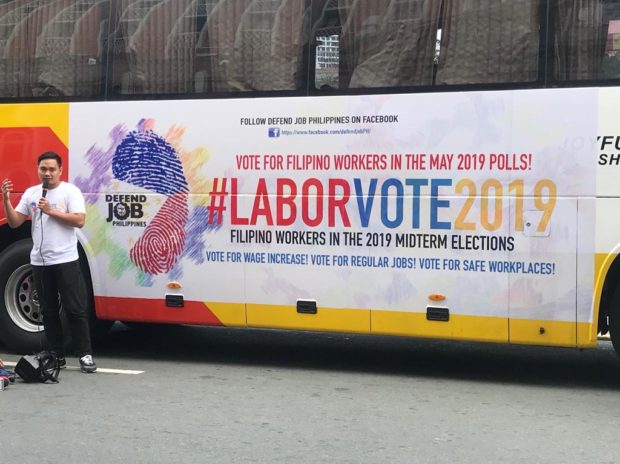 Christian Magson, spokesperson of Defend Job Philippines, appeals to candidates to include labor issues in their platforms at the launch of the #LaborVote2019 campaign on February 11. 2019. PHOTO by Faye Orellana

MANILA, Philippines — As the campaign period kicked off on Tuesday, labor groups urged candidates to include the labor agenda in their platforms.

Defend Job Philippines staged a short program in front of the Commission on Elections (Comelec) headquarters in Manila as it launched its #LaborVote2019 campaign.

Christian Magsoy, the spokesperson of the group, said labor issues have long been used as campaign slogans by candidates, but no action was done to address the issue.

“Elections have passed and yet promises for better labor environment remained promises, as our expectant working people and their families remained poor and living more miserable lives due to loads of anti-labor and anti-people policies enacted by the same politicians they elected,” Magsoy said.

The group also launched the Labor Vote Bus to educate the public on who to vote in the upcoming elections properly.

It said it would also hold town hall meetings to allow candidates and the public to discuss the issues of the labor force.

“In the upcoming May 2019 senatorial and local elections, Filipino workers will be as empowered and more intelligent voters as ever,” Magsoy said.

“The solid and huge Philippine labor vote is set to use the electoral platform to raise their issues, send their messages across and pick genuine pro-labor candidates who can truly address and resolve their long-drawn democratic and legitimate aspirations for jobs, wages, and labor rights,” he added. /ee