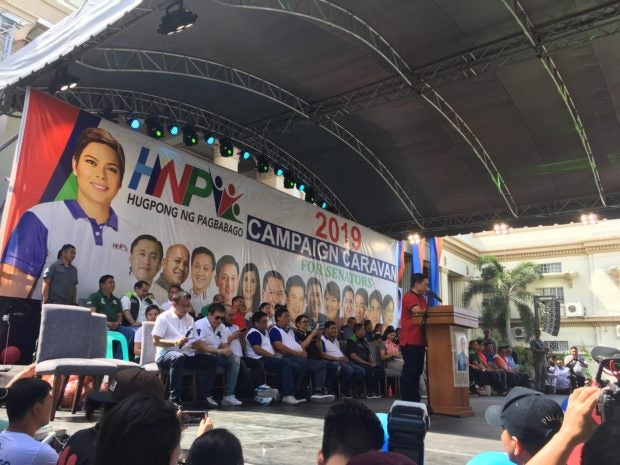 Senatorial aspirant Christopher “Bong” Go addresses the crowd during the launch of the campaign caravan of Hugpong ng Pagbabago in Pampanga on Tuesday. PHOTO BY TONETTE OREJAS

CITY OF SAN FERNANDO — Senatorial aspirant Christopher “Bong” Go promised to put up more Malasakit Centers to care for the medical needs of poor people as he took his turn to court voters here on Tuesday.

Go joined other senatorial candidates of Hugpong ng Pagbabago during the Luzon leg of the administration party’s proclamation rally on Tuesday.

As he expounded on the Malasakit Centers, a part of the tent beside the stage got ripped off by the wind.

After he got over his shock, he said he would continue to be a bridge to President Duterte.

As the former long-time aide of Duterte, Go said his breakfast, lunch and dinner consisted of serving the President.

He said he would continue what President Duterte started and these are the fights against illegal drugs, crimes, and corruption.

He was accompanied on the stage by actor Philip Salvador who threw shirts and basketballs to the audience./lzb