Hontiveros hits back at Sara: I’m not the one with my head in my ass 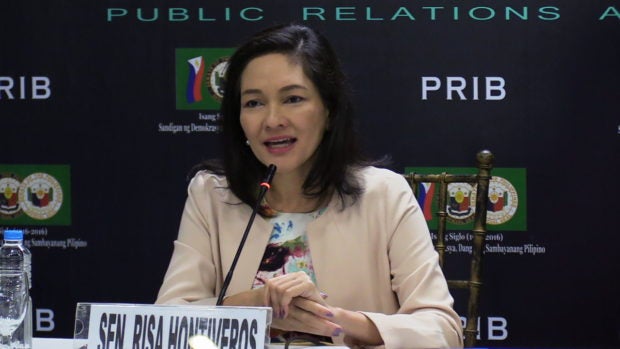 MANILA, Philippines — Senator Risa Hontiveros on Tuesday lashed back at Davao City Mayor Sara Duterte-Carpio for insulting her when she demanded the resignation of Public Attorney’s Office chief Persida Acosta.

Hontiveros called for the resignation of Acosta following the measles outbreak in some parts of the country due to the lawyer’s “scaremongering and politically-motivated investigations on the Dengvaxia issue.”

Sara, however, turned tha table and said it should be Hontiveros who should resign and not Acosta.

But Hontiveros remained unfazed by the younger Duterte’s tirades.

“I would like to thank Davao City Mayor Sara Duterte for once again taking the trouble to share her opinion about my work on democracy and human rights,” she said in a statement.

“Every time she attacks me, she validates my work and vindicates my positions on important issues. Every insult from the Mayor is a reading on the barometer I can use, second to none, to confirm how effective my office is in advancing democratic interests and goals,” she added.

The senator recalled how Sara had “ridiculed my opposition to the lowering of the Minimum Age of Criminal Responsibility (MACR), even kindly advising” me to walk the streets to “know the reality on the ground.”

“Excuse me, I started my work life as a community organizer among farmers and fisherfolk 30 years ago in Rizal Province,” he said.

“And unfortunately for the good Mayor, the recent Social Weather Station (SWS) survey showed that the majority of Filipinos oppose the lowering of the MACR. How’s that for a reality check? Pardon my French, but I’m not the one with my head in my ass,” he added.

In her defense of Acosta, the presidential daughter also said the senator should stop criticizing and instead think of solutions.

She said “it would help ensure an impartial investigation of the issue, end speculations that the matter is being politicized and prevent further panic and fear from being inflicted on the public.”

“For someone who is supposedly against incompetence, the Mayor is surprisingly hostile to my call,” she said.

“What’s keeping Mayor Sara from going after these people who are the real dangers to our nation and society?” she asked.

“As for solutions, my legislative track record speaks for itself. From the Mental Health Law, the Expanded Maternity Leave Law, the Strengthened Anti-hospital Deposit Law, the Safe Streets and Public Spaces Act, the Philippine HIV and AIDS Policy law, the First 1000 Days Law up to the Positive Discipline Act, we have done the hard work. We have delivered,” she said.

“We do this even as we continue to add our voice of dissent to hold this government to account and defend democracy,” she added. /jpv