Muslims join hands with Christians to secure Mass in Basilan 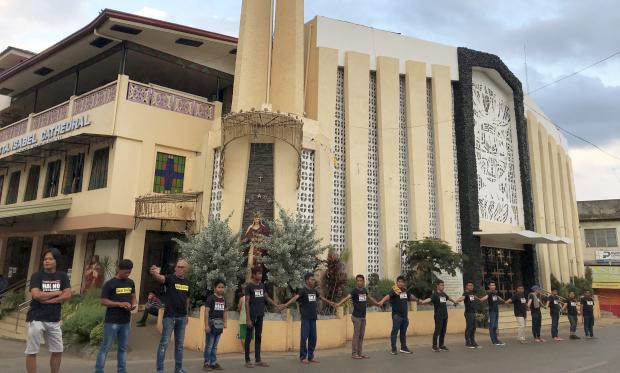 Young Muslim and Christian professionals joined hands on Sunday, Feb. 10, 2019, to secure a Mass being celebrated at the Santa Isabel Cathedral in Isabela City in Basilan. (Photo by JULIE ALIPALA / Inquirer Mindanao)

ISABELA CITY, Basilan — Young Moro and Christian professionals on Sunday trooped to Santa Isabel Cathedral in this city and joined their hands to form a human barricade to secure a Mass being celebrated there.

Abou Mohammad Asmawil, the provincial director of the Department of the Interior and Local Government in Basilan, said they agreed with other young Moro professionals to come up with own advocacies to assure Christians that they were against violence.

“We are not bad guys and we condemn any terror activities targeting innocent people,” Asmawil said. “As Muslims, we would like people to feel that we are concerned, that we care, and that we love our Christian brothers.”

“We are here to guard the Church,” he added, noting that he was able to gather some 50 young professionals from as far as Sumisip, Mohammad Ajul, Maluso, and Lamitan.

“We’re showing them that we don’t tolerate any form of terror act and there are Muslims who are willing to sacrifice life to protect our Christian friends and neighbors,” Asmawil said. “This is not a shortlived activity. We will do it every Sunday for Christians and every Friday for Muslims.”

January Yap Zanoria, provincial coordinator of the Interfaith Council of Leaders in Basilan, said there had been a subtle strain between Muslims and Christians after the twin blasts that rocked the Cathedral of Our Lady of Mount Carmel in Jolo last Jan. 27 and the grenade throwing in Zamboanga City on Feb. 1.

“There is fear and apprehension from both sides and we are here to show our unity, especially to convey our message to them and to the other parts of the world that in this city, the Muslims and Christians coexist peacefully,” Zanoria said.

The human barricade they formed, she said, was as “a symbol to show to them that we Muslims and Christians formed a strong bond to make them feel protected.”

“And we are not doing this for the Catholic faith [alone],” she added. “We are also doing this for our brothers and sisters in Islam. On Friday we are also going to the mosques and we also bring our Christian friends to secure their worship place.”

Percival Go, a 67-year-old churchgoer, interacted with the young people at the barricade and shook their hands for making him feel safe.

“I was having second thoughts,” Go said. “My children keep telling me to stay at home until the tension is down, especially in Sulu. But it’s my Sunday obligation. The presence of these people in black shirts makes me feel secure.”

He said the church had been receiving threats.

“But we are showing them that we are not afraid. We have our brother and sisters Muslims who are with us,” Go said.

The Rev. Jude Angeles, one of the priests who said the 6:00 a.m. Mass at Santa Isabel Cathedral, said: “They are here welcoming the spirit of peace and building a good relationship with the Christians. These are young professionals gathered, just like what they did in Zamboanga City. And they would like to serve as a bridge between Muslims and Christians because of what happened in Jolo where there is seemingly a mild break up in a relationship.”

Angeles said the Christians in Basilan had established a strong faith and a better relationship with Muslims.

“I am glad they are here. It gives everyone the feeling of security,” he said.

Supt. William Gadayan, chief of the Isabela City Police Station, said the activity had been properly coordinated to his office.

“This interfaith activity has been planned and agreed by professionals, teachers, community leaders, and security sectors,” he said, adding that they would gather every Sunday and Friday to secure churches and mosques.

As to recent reports of bomb threats, Gadayan said: “All information is processed and validated and we implemented some measures, including tightening security outside and inside the church.” /atm