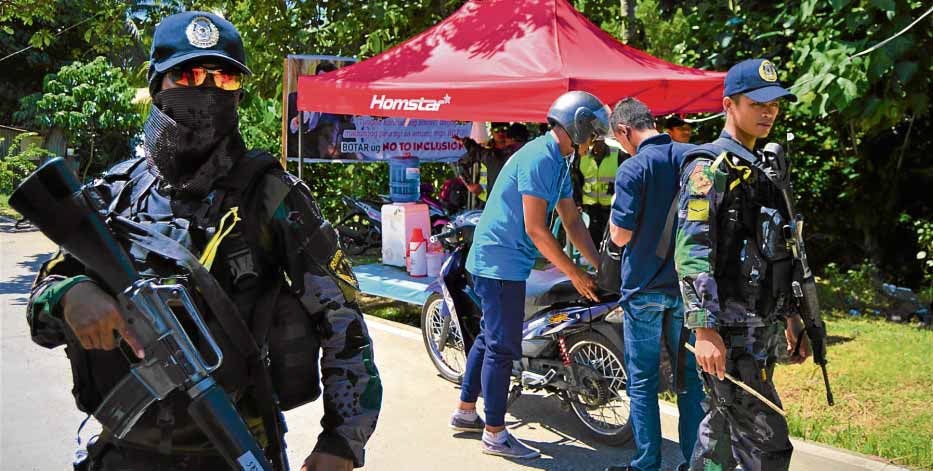 SECURITY CHECK PNP Director General Oscar Albayalde has ordered more road checkpoints, like this one in Tubod town, Lanao del Norte province, to tighten security for Wednesday’s plebiscite that will decide whether six towns in the province and 67 villages in seven towns of Cotabato province will join the Bangsamoro Autonomous Region in Muslim Mindanao. —JIGGER J. JERUSALEM

The second round of a vote for the ratification of a law that would give Muslims greater control of Mindanao went on without any serious  incident in Cotabato and Lanao del Norte provinces on Wednesday, the Commission on Elections (Comelec) said, despite explosions on Tuesday believed to be intended to keep voters at home.

James Jimenez, spokesperson for the Comelec, described the plebiscite as successful after the polls closed at 3 p.m.

The vote was held in 67 villages in Cotabato and six towns in Lanao del Norte to determine whether those municipalities would become part of the proposed Bangsamoro Autonomous Region in Muslim Mindanao (BARMM), whose charter, the Bangsamoro Organic Law (BOL), was ratified in the first round of the plebiscite in the Autonomous Region in Muslim Mindanao (ARMM) and the cities of Cotabato and Isabela on Jan. 21.

Speaking on radio at about noon, PNP Director General Oscar Albayalde said the explosions in Lala and Kauswagan in Lanao del Norte were likely “fear-mongering” to defeat the BOL in the plebiscite.

Albayalde said “everything [was] peaceful” at the polls and the vote went “without incident.”

Malacañang deplored the explosions on Tuesday, saying no act of intimidation could stop voters from turning out for the plebiscite.

Presidential spokesperson Salvador Panelo said the explosions were “acts of cowardice on the part of those who resist change and want to perpetuate the climate of fear, hopelessness and poverty among the Bangsamoro people and the Christian inhabitants in Mindanao.”

On the eve of the plebiscite, a grenade went off near a gas station at Barangay Maranding in Lala and a homemade bomb exploded near the town hall in Kauswagan.

No one was hurt in the explosions, police said.

“It was meant to sow fear among the people, just like what they did in Cotabato City,” Dimaporo told reporters, referring to Tuesday’s explosions and the grenade-throwing in Cotabato City early on Jan. 21, which did not stop residents of the city from voting for the BOL.

“We cannot accept that accusation without any proof,” Murad said.

“We have been campaigning very hard not to disturb the plebiscite because we know the people need to vote. If there are disturbances, that will discourage voters to go to voting places. I think those who would do that are those who are against the plebiscite,” he said.

More than half a million voters were expected to take part in the plebiscite.

The Comelec had predicted a turnout of more than 70 percent, but Jimenez said the election watchdog had received reports that the turnout was nearing 75 percent as of midday on Wednesday.

“We expected a lower turnout due to apprehensions because of security concerns in some places. But people are coming out. They do not come in droves like in the previous elections but the stream of arrivals was steady,” Jimenez said.

“We’re lucky if we can even reach 60 percent voter turnout,” Abas told reporters in Midsayap after the polls closed.

Security was tight to ensure voter safety during the plebiscite, with attack helicopters watching from the sky as the vote got under way in Cotabato.

About 2,000 members of the Moro National Liberation Front (MNLF) faction led by Nur Misuari participated in the plebiscite in Cotabato.