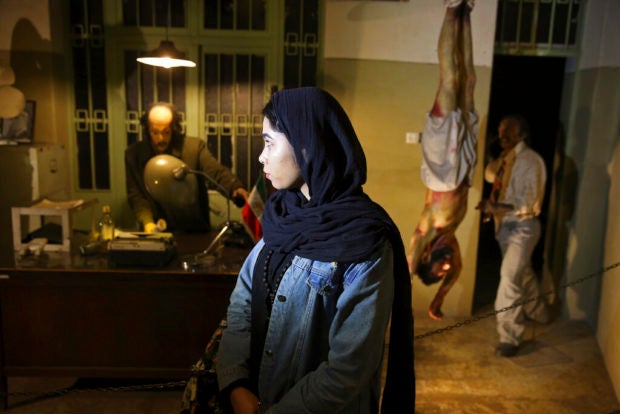 In this Jan. 7, 2019 photo, an Iranian looks at an exhibition at a former prison run by the pre-revolution intelligence service, Savak, now a museum, where wax mannequins of interrogators and a prisoner are displayed, in downtown Tehran, Iran.  AP

TEHRAN, Iran — The halls of the former prison in the heart of Iran’s capital now are hushed, befitting the sounds of the museum that it has become. Wax mannequins silently portray the horrific acts of torture that once were carried out within its walls.

But the surviving inmates still remember the screams.

Exhibits in the former Anti-Sabotage Joint Committee Prison that was run under Shah Mohammad Reza Pahlavi include a frightened man trapped in a small metal cage as a cigarette-smoking interrogator shouts above him.

In a circular courtyard, a snarling interrogator is depicted forcing a prisoner’s head under water while another inmate above hangs from his wrists.

As Iran this month marks the 40th anniversary of its Islamic Revolution and the overthrow of the shah, the surviving inmates who suffered torture at the hands of the country’s police and dreaded SAVAK intelligence service still bear both visible and hidden scars. Even today, United Nations investigators and rights group say Iran tortures and arbitrarily detains prisoners.

“We are far from where we must be as far as the justice is concerned,” said Ahmad Sheikhi, a 63-year-old former revolutionary once tortured at the prison. “Justice has yet to be spread in the society, and we are definitely very far from the sacred goals of the martyrs and their imam,” Ayatollah Ruhollah Khomeini.

The SAVAK, a Farsi acronym for the Organization of Intelligence and Security of the Nation, was formed in 1957. The agency, created with the help of the CIA and Israel’s Mossad, initially targeted communists and leftists in the wake of the 1953 CIA-backed coup that overthrew elected Prime Minister Mohammed Mosaddegh.

Over time, however, its scope was widened drastically. Torture became widespread, as shown in the museum’s exhibits. Interrogators all wear ties, a nod to their Western connections. Portraits of the shah, Queen Farah and his son, Crown Prince Reza Pahlavi, who now lives in exile in the US, hang above one torture scene.

“Following the coup, the shah’s regime sank into a legitimacy crisis and it failed to get rid of the crisis until the end of its life,” said Hashem Aghajari, who teaches history at Tehran’s Tarbiat Modares University. “The coup mobilized all progressive political forces against the regime.”

Sheikhi walked with Associated Press journalists through the prison that once held him, built in the 1930s by German engineers. Black-and-white photographs of its 8,500 prisoners from over the years line the walls. They include current Supreme Leader Ayatollah Ali Khamenei and the late President Akbar Hashemi Rafsanjani.

Sheikhi, then 19, spent about three months in the prison and 11 months in another after being detained for distributing anti-shah statements from Khomeini, then in exile.

“Four times I was tortured in two consecutive days, every time about 10 minutes,” he recounted. “They used electric cables and wires for flogging my (feet) while I was blindfolded. The first hit was very effective; you felt your heart and brain were exploding.”

Even more frightening was the torture device interrogators and prisoners referred to as the Apollo, named after the US lunar program. Those tortured sat in a chair and had a metal bucket strapped over their head, like a space helmet, that intensified their screams.

“They put my fingers and toes between the jaws of the vises firmly, whipped the soles of my feet with cables and put a metal bucket over head,” Sheikhi said. “My own cries would twirl around inside the bucket and made me delirious and gave me headaches. They would hit the bucket with those cables as well.”

Ezzat Shahi, another former prisoner who planted bombs targeting state buildings, recounted having pins hammered under his nails that would be heated by candles.

“Hanging from the wrists while your hands were handcuffed crossed behind was the most intolerable torture,” Shahi said.
The horror of the torture shocked 20-year-old museumgoer Ameneh Khavari.

“I did not know that the torture might have been this agonizing, such as with the metal cage torture device,” she said. “I had known that there was torture then from movies about the pre-revolution times, but would not have imagined that they looked like this.”

As the revolution took hold, protesters overran the prison. Then Iran’s Islamic government began using it as a prison as well, calling it Tohid. Human Rights Watch has accused Iran of using both Tohid and Evin prisons for detaining political prisoners. Tohid, then run by Iran’s Intelligence Ministry, closed in 2000 under reformist President Mohammad Khatami after lawmakers sought to close prisons not under the control of the judiciary.

Today, Iran’s government faces widespread international criticism from the UN and others over its detention of activists and those with ties to the West.

“Iranian authorities use vaguely worded and overly broad national security-related charges to criminalize peaceful or legitimate activities in defense of human rights,” according to a report released in March 2018 by the office of the UN’s special rapporteur on human rights in Iran.

Iran has criticized the UN’s creation of the special rapporteur’s position and called its findings “psychological and propagandist pressures.”

A series of Westerners, including Washington Post journalist Jason Rezaian, were held at Evin Prison. Rezaian is suing Iran in US federal court over his detention, alleging he faced such “physical mistreatment and severe psychological abuse in Evin Prison that he will never be the same.”

Since the revolution, several former prisons from the shah’s time have closed, becoming museums and shopping malls, although new ones were built. A former mayor of Tehran even planned to make Evin Prison a park at one point. Funding never came through, however, and the site remains a prison today. /ee