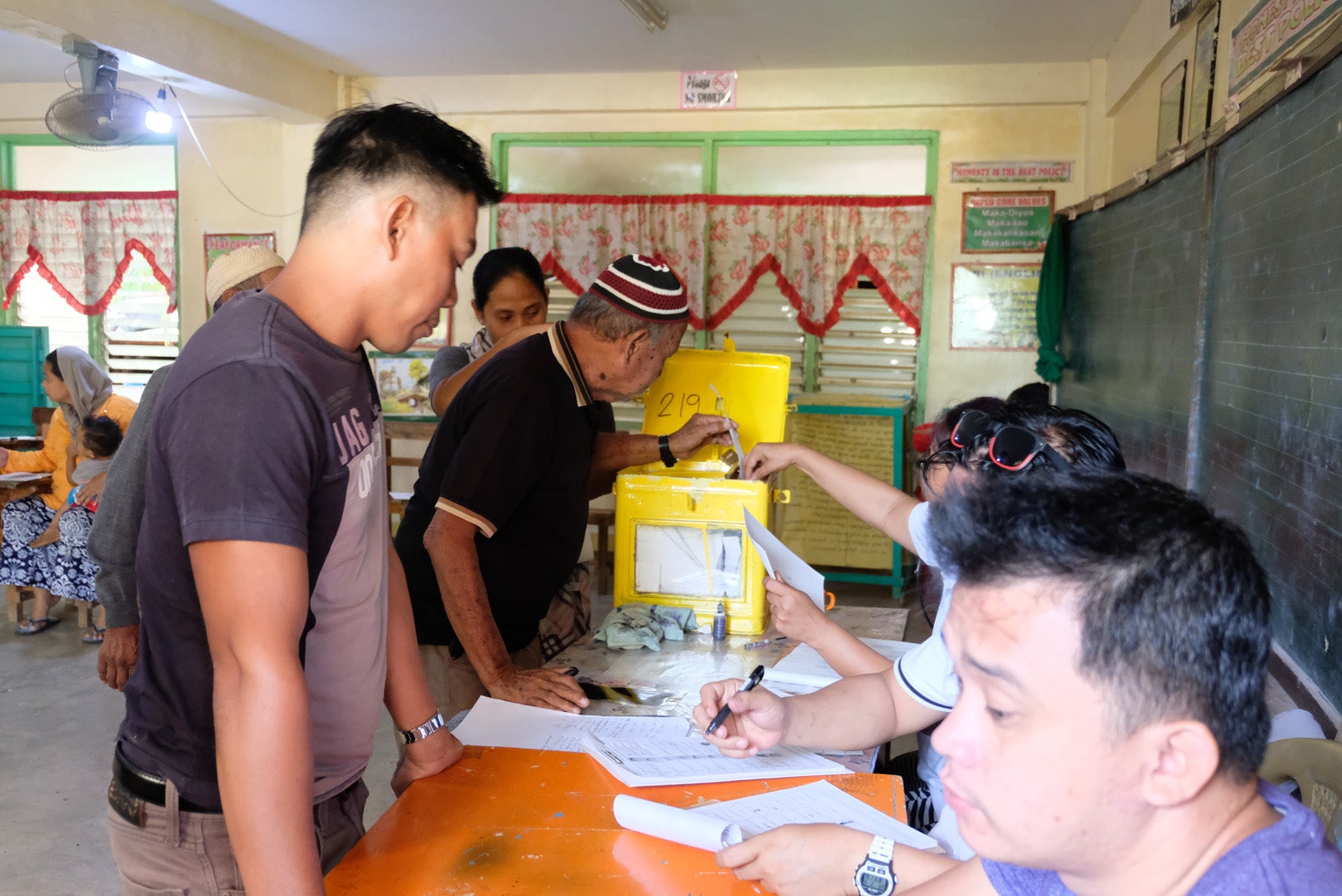 A voter places his ballot inside the box at the Sambulawan Elementary School in Barangay Sambulawan, Midsayap, North Cotabato on February 6. Bong S. Sarmiento

MIDSAYAP, NORTH COTABATO — As voters started to pile up at the Indayla Silongan Elementary School in Barangay Kapinpilan here at mid-morning Wednesday, two MG-520 attack helicopters suddenly hovered in the sky, circling the village a few times, prompting people to look up.

In the 1970s, the sound of helicopters would send residents in the villages of Kapinpilan and Sambulawan scampering for safety. These two villages have been known bailiwicks of the Moro National Liberation Front (MNLF) faction loyal to founding chair Nur Misuari.

The two villages were also among the worst affected by the government’s military operations in the 1970s to flush out the MNLF rebellion.

Kapinpilan and Sambulawan were also among the 13 villages here that petitioned to be part of the Bangsamoro Autonomous Region in Muslim Mindanao (BARMM).

But on Wednesday, the day of the plebiscite on the proposed inclusion of the villages in the Bangsamoro, the faces of voters did not show a trace of fear.

He said no untoward incident related to the plebiscite was reported in the province as of 10:30 a.m. Wednesday.

Sixty-seven villages in seven towns in North Cotabato have petitioned for inclusion in the Bangsamoro Autonomous Region in Muslim Mindanao (BARMM).

“This (BARMM) will put a period to the conflict in Mindanao and will bring peace and development to our communities,” Toto Kunakon, village chair of Kapinpilan, told the Inquirer.

“We are tired of war,” said Kunakon. “This is the opportunity for Muslims to establish a government that will chart a better future for the Bangsamoro people,” Kunakon added. He said he voted for the future generation. He has 10 children, seven of whom are still in school.

But Rudy Abdul, an MNLF member loyal to Misuari and who lives at Barangay Sambulawan, voted against the village’s inclusion to the BARMM.

“I want a federal government, which later on shall establish an independent Islamic state,” said Abdul.

“They need it for protection. Among Muslims, there are rido (clan war),” Abdul said. 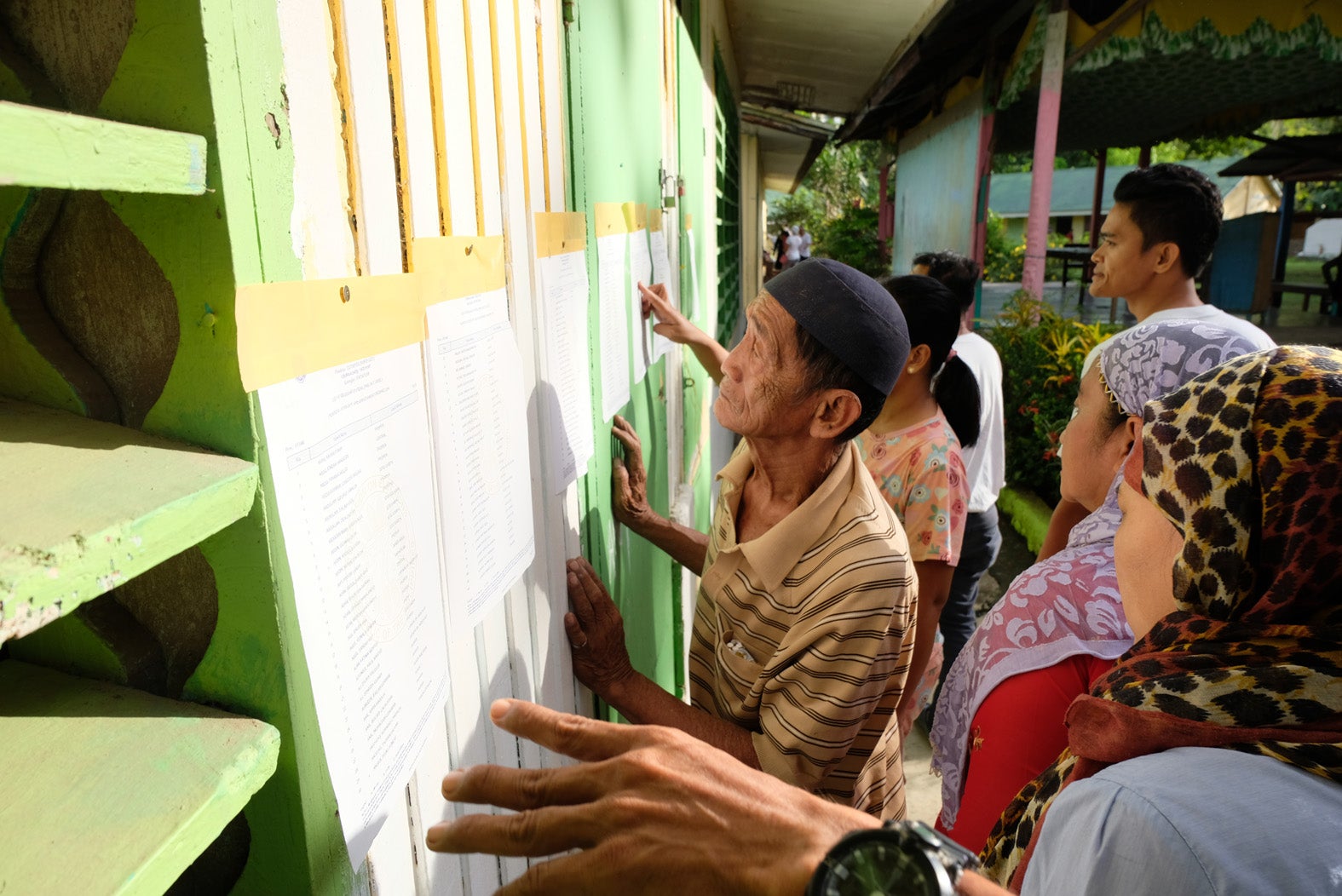 Reynaldo Tubelonia, Midsayap Comelec officer, said teachers lined up at the municipal treasurer’s office as early as 3 a.m Wednesday to get the election materials.

The distribution started at 4 a.m. and they immediately went to their polling centers escorted by the military and police, he said.

By noon, some complaints that reached their office included missing names of voters, he said.

Their names might have been taken off the voters’ list because either they had noted voted twice in a row or they had double registrations, Tubelonia said.

“Most of us here are voting yes for inclusion,” said Samama Samok, a council member of Barangay Rajamuda in Pikit town.

“If we are included in the BARMM, our children will have a brighter future because they can go to school in an atmosphere of peace,” he said.

In the village, some men, supposedly BIAF members, openly brandished their Armalite and M-14 rifles. /lzb