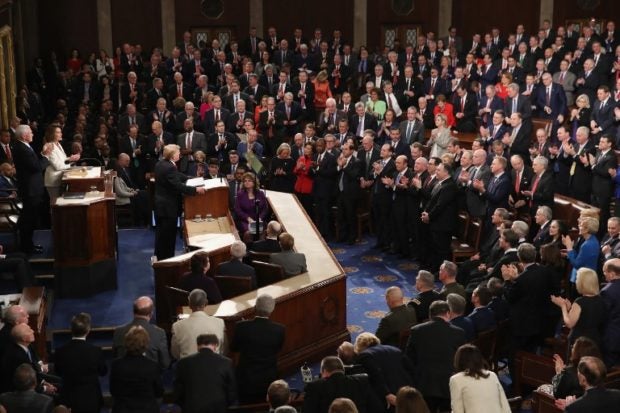 President Donald Trump gives the State of the Union address in the chamber of the US House of Representatives at the US Capitol Building on February 5, 2019 in Washington, DC. AFP

WASHINGTON, United States — For more than five years, Victorina Morales made Donald Trump’s bed, cleaned his toilet and dusted his trophies as a housekeeper at one of his golf clubs — without legal status to reside in the United States.

On Tuesday night, the 46-year-old from Guatemala took her place as a Democratic lawmaker’s guest for the president’s State of the Union address to Congress, where she hoped to be a powerful symbol of the undocumented migrants his administration has demonized.

“If I could talk to him, I would tell him that we want immigration reform for us immigrants here, we are 12 million and we have come to work, to fight, we have not come to invade this country,” she told AFP.

“I speak not only for myself, I speak for all the others and I have faith, people will hear us,” she continued, her voice breaking with emotion.
Morales, who crossed into the US without papers in 1999, went public with her story in December, when she told The New York Times about her time as an employee at Trump National Golf Club in Bedminster, New Jersey.

She quit to become a campaigner, while several other undocumented employees were fired.

So why, after all those years, did she decide to speak out?

“Because I’ve had enough of insults, aggression, humiliations — because it hurts to be told that you are an immigrant who knows nothing, that you can’t complain, or else they’ll call immigration services,” she says.

Morales admits she doesn’t know if Trump, who sometimes left generous tips for her work, was aware of these working conditions.

“But one day I said to myself, ‘That’s enough, I can’t stand it anymore,'” she said, as Democratic Congresswoman Bonnie Watson Coleman — who hosted the former housekeeper in her congressional office — held her hand.

Trump’s New Jersey golf course falls in Coleman’s constituency, so the lawmaker decided to invite Morales as her guest to the president’s speech, a key fixture in US politics in where American leaders tout their accomplishments and outline their future vision.

“I believe that Ms Morales is the face of immigration and undocumented individuals in this country, hardworking, who want a better life for their families,” she said, adding that Morales had fled violence to come to the US, seen as a land of opportunity.

Coleman added that she wanted to highlight the “hypocrisy” of Trump, who as president has tirelessly fought to get funding for a border wall along Mexico to combat what he calls the crisis of illegal immigration.

“But the businessman, the entrepreneur, Donald Trump had no problems hiring people who didn’t have full documentation,” Coleman said.
Trump’s golf course denied to US media having knowingly hiring undocumented migrants — but a Democratic lawmaker has called for an investigation into alleged labor violations.

As a result of being a “material witness” to these violations — and the fact she now has an asylum claim — Coleman believes Morales should be safe from deportation — which would, she said, amount to “retaliation.” /ee