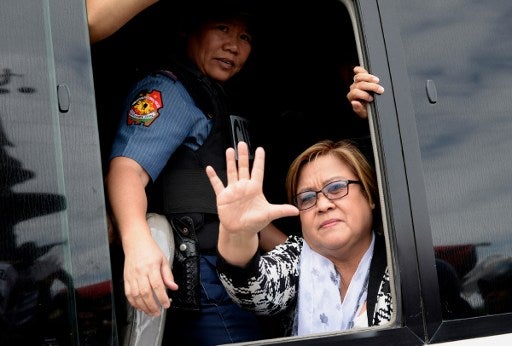 MANILA, Philippines — Senator Leila de Lima has requested the Senate Electoral Tribunal (SET) to bare in public the results of the electoral protest filed by former senatorial candidate Francis Tolentino against her.

De Lima said in a statement on Wednesday that the public has the right to know why Tolentino suddenly withdrew his protest, thus, her filing of a motion to release the results of revision and appreciation of ballots last Monday.

“In order to stop the misinformation and to finally stop Tolentino from playing the victim, De Lima invokes the plenary authority of the Honorable Tribunal as the ‘sole judge’ of electoral contests involving members of Congress, and urges the Honorable Tribunal to not simply grant Tolentino’s Motion and dismiss the entire protest but to make public the results of its initial determination of the concluded revision of pilot precincts pursuant to Rule 76 of the SET Rules of Procedure,” the senator said in her formal request.

In previous reports, Tolentino said that he is withdrawing his protest for him to focus on campaigning for the May 2019 elections.  The former Metropolitan Manila Development Authoritiy chair is gunning for a Senate seat for the second time.

In the 2016 national elections, De Lima — who ran under the previous administration’s ticket — placed 12th, enough for the last spot in the Senate’s Magic 12.

Tolentino on the other hand ranked 13th, a single spot shy of being a senator.

He said there were irregularities in the counting of votes, which allowed De Lima to win instead of him.  However, the lady senator was confident that the SET never discovered any irregularity with the conduct of the 2016 elections.

“As will be confirmed by the Honorable Tribunal, Tolentino neither had a significant vote recovery nor was there a discovery of any fraud or irregularity that could substantiate his preposterous accusation,” De Lima claimed.

“When these official results are out in the open, Tolentino can finally make peace with the fact that he was not cheated. He was defeated, and there should be no shame in that,” she added.

Tolentino was originally part of the Liberal Party slate, but he asked to be excused after controversies surrounding a lewd performance of an all-female group in a birthday of a Liberal Party official.

READ: Tolentino gets flak for ‘surprise gift’ at LP event

After his removal, he transferred to President Rodrigo Duterte’s line-up, and then serving as a part of his cabinet. /jpv