MANILA, Philippines — After barely a week since the government’s Manila Bay Rehabilitation project, some students were already caught throwing trash in the newly-cleaned bay.

One netizen took her concern to social media as she personally saw some students throwing cigarette butts and plastic wrappers in Manila Bay.

According to the post which has now been taken down, she went to Manila Bay to see the outcome of the cleanup drive held last January 27.

She said that there were also some students from a certain school in Metro Manila who were spending time in the area.

However, minutes after, she saw that some of these students began littering and even buried some of their trash under the sand.

She immediately called the students out on their actions but she was only met with laughter from the youths. 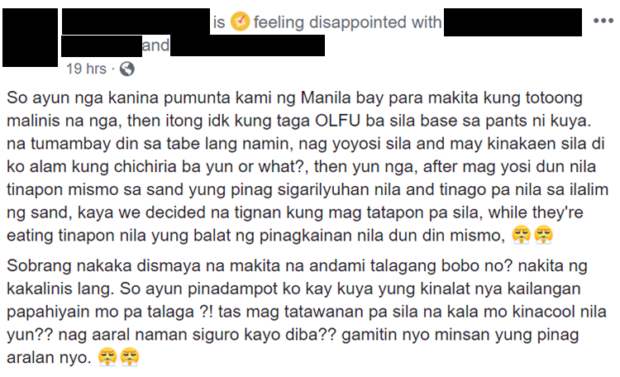 According to the Metropolitan Manila Development Authority, 11 trucks of garbage were collected during the cleanup drive.

Metro Manila mayors also recently passed a resolution in support of the rehabilitation of the bay.