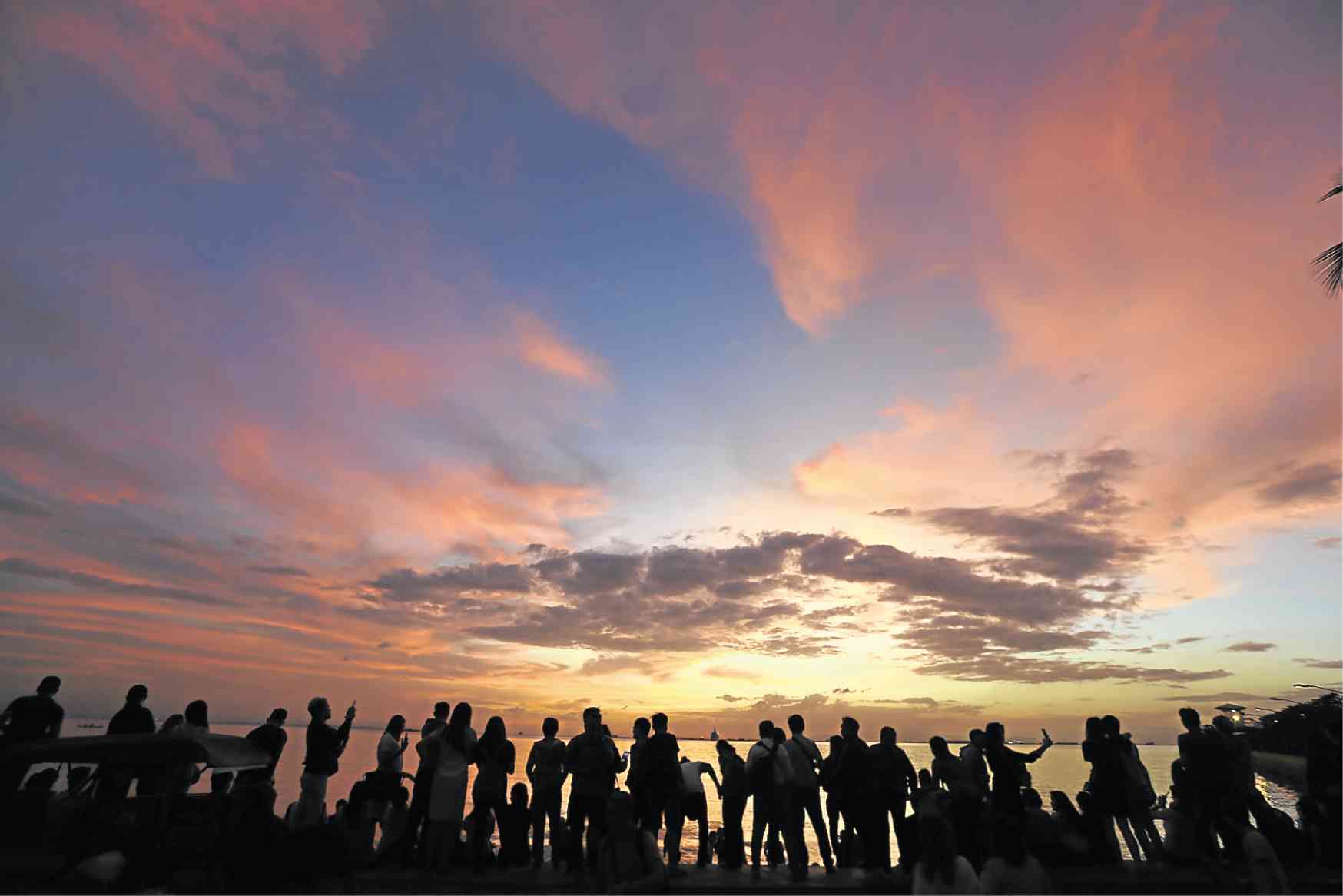 AFTERNOON DELIGHT Sunset-gazers on Manila’s Baywalk strip on Wednesday enjoy both the view and the trash-free shoreline of Manila Bay, which underwent a major cleanup on Jan. 27. —EDWIN BACASMAS

Four more establishments were slapped with government cease-and-desist orders on Wednesday for discharging untreated wastewater into Manila Bay, bringing to seven the number of businesses told to stop operations or face legal action.

As part of a government program to rehabilitate the bay, notices of violation were also issued to the main office of the Government Service Insurance System (GSIS) and six other establishments for water pollution.

On Sunday, when the cleanup campaign dubbed “Battle for Manila Bay” started, authorities shut down the water sources and wastewater discharging facilities of Aristocrat Restaurant, Gloria Maris Shark’s Fin and The Esplanade after these were found dumping untreated wastewater directly into the bay.

The cease-and-desist orders were based on recent inspections by the LLDA in the Manila Bay area and on results of laboratory analyses of wastewater samples taken from the establishments.

Test results showed that the samples did not conform with standards for Class “SB,” which are considered recreational waters that can be regularly used by the public for swimming and bathing.

The LLDA said a similar notice had been issued to Rizal Park Hotel on T.M. Kalaw Street in Ermita.

Its general manager, Jaime Medina, earlier said that the authorities would continue to inspect establishments near Manila Bay and estuaries that flow into it.

In the Pasay and Manila area alone, the LLDA has uncovered 120 establishments without sewage treatment plants and are dumping dirty water directly into the bay, according to Medina.

Violators may face a fine of up to P200,000 daily, starting from the data they received the LLDA order.

The agency will inspect the establishments again to ensure their compliance with water standards.

Read Next
Minus 46: 12 dead as historic deep freeze grips US Midwest
EDITORS' PICK
Gear up and get ready to play with Yamaha Mio Gear
On Day 2 of implementation, gov’t says workers now exempt from ‘no vax, no ride’ policy
DOH: 28,471 new COVID-19 cases in PH; active cases now 284,458
Over 3 Million worth of prizes to be won at Smart Padala’s SENDali Manalo Promo!
Metro Manila posts lowest temperature yet this ‘amihan’ season at 19°C
Acer starts the year off strong with the Aspire Vero National Geographic Edition
MOST READ
In Batanes, octogenarian dies of COVID-19
Cold-case investigation names surprise suspect in Anne Frank’s betrayal
Czech anti-vax singer dies after deliberate infection
Derek Ramsay on being married to Ellen Adarna: ‘Gumaan ‘yung mundo ko’
Don't miss out on the latest news and information.