Minus 46: 12 dead as historic deep freeze grips US Midwest 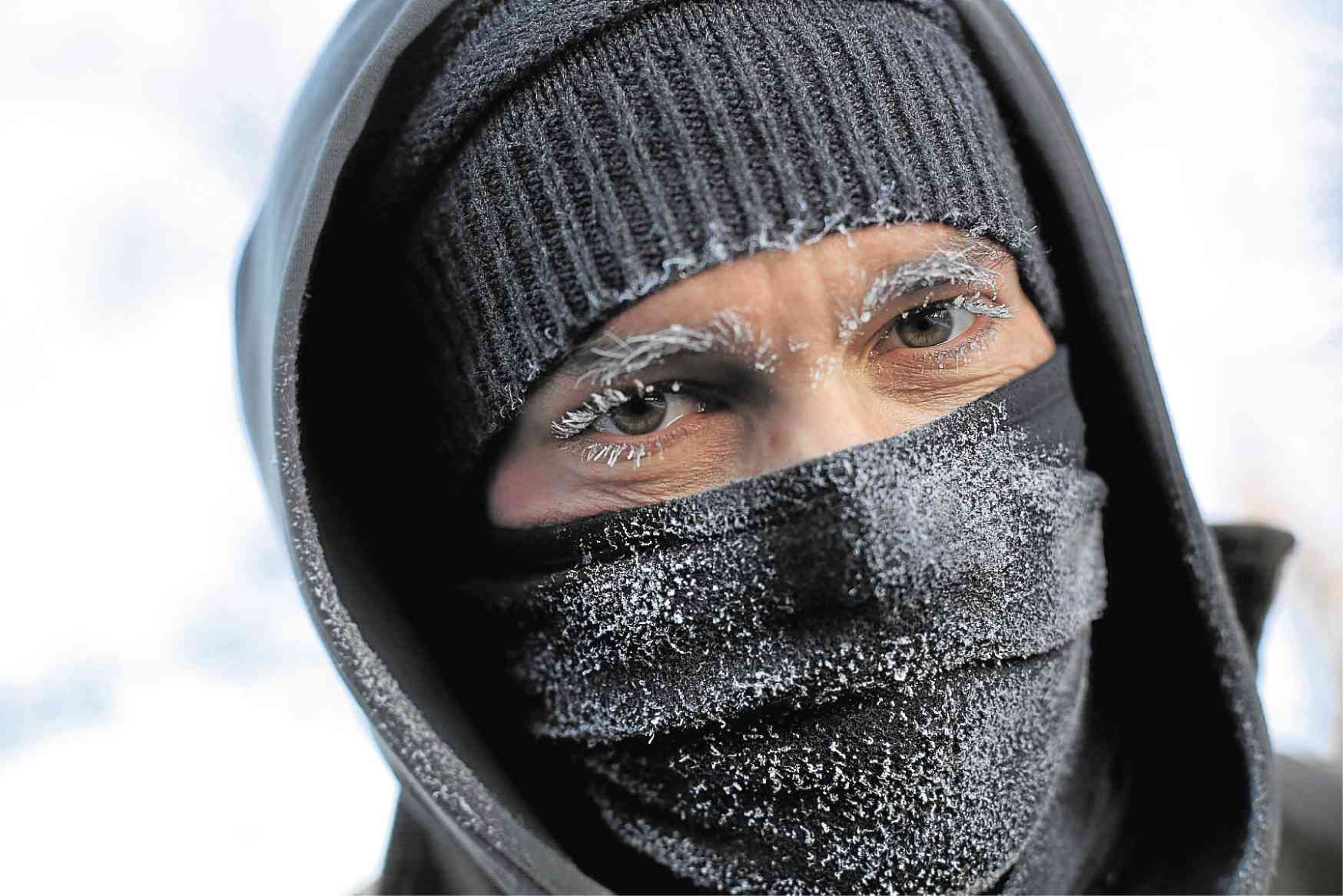 ICY BITE A man’s eyebrows and eyelashes show frost after he walked along Lake Michigan’s ice-covered shoreline in Chicago, Illinois, on Wednesday. Frostbite warnings have been issued in parts of the US Midwest as temperatures colder than Antarctica grounded flights, forced schools and businesses to close, and disrupted life for millions. —AFP

CHICAGO — A brutal cold wave moved eastward on Thursday after bringing temperatures in the US Midwest lower than those in Antarctica, grounding flights, closing schools and businesses and raising fears of hypothermia.

The extreme weather has now been blamed for as many as 12 deaths, according to US news reports.

Wednesday morning’s temperature in Chicago was minus 30 degrees Celsius, which felt like minus 46 C with wind chill—colder than Alaska’s state capital and even colder than parts of Antarctica.

Mail deliveries were suspended and people were encouraged to stay home in nearly a dozen US states where the mercury plunged into negative double digits, the worst freeze to grip the region in a generation.

The phenomenon stemming from a blast of Arctic air caused surreal scenes throughout the region, such as steam rising off the waters of Lake Michigan—the result of extremely cold air passing over warmer water below.

Parts of Niagara Falls solidified into frozen stillness, and blocks of ice covered the river winding through downtown Chicago.

On the direct path of the harsh weather, Chicago experienced its second-coldest day ever and was on track to break new records overnight when temperatures were forecast to reach their lowest points in the early hours of Thursday.

“This is a historic cold, obviously,” Chicago Mayor Rahm Emanuel told a Wednesday night news conference. “They are life-threatening temperatures, and they should be treated accordingly.”

The most intense cold was expected overnight Wednesday into Thursday, said Ben Deubelbeiss, a meteorologist with the National Weather Service (NWS).

“It feels like being close to dry ice,” Leon Gilbert, 31, told Agence France-Presse (AFP). “I can feel my skin tighten up.”

Unlike most Chicago residents, Gilbert was required to report to his job at a Starbucks branch on a downtown street largely devoid of its usual bustle of people and traffic.

Sandwich shop manager Daniel Gonzalez, 37, also reported to work—at 5 a.m. “I have two shirts on, I have a hoodie, I have my big winter coat, I have a face mask and a skullcap, and I’m still cold,” he said.

At Chicago’s O’Hare International Airport, a major regional hub for airlines, ground crews struggled with freezing equipment. They were told to avoid spending more than 15 minutes at a time exposed to the cold, causing delays for flights that managed to take off.

More than 1,800 flights were canceled at Chicago’s two major airports, while rail operator Amtrak scrapped train services from its hub in the city.

The US Postal Service suspended deliveries in parts of Indiana, Michigan, Illinois, Ohio, Iowa, the Dakotas and Nebraska.

The cause of the subzero chill affecting tens of millions of Americans was a swirl of Arctic air that broke away from the polar vortex that usually encircles the North Pole.

“The priority must continue to be on keeping people safe,” Whitmer said. 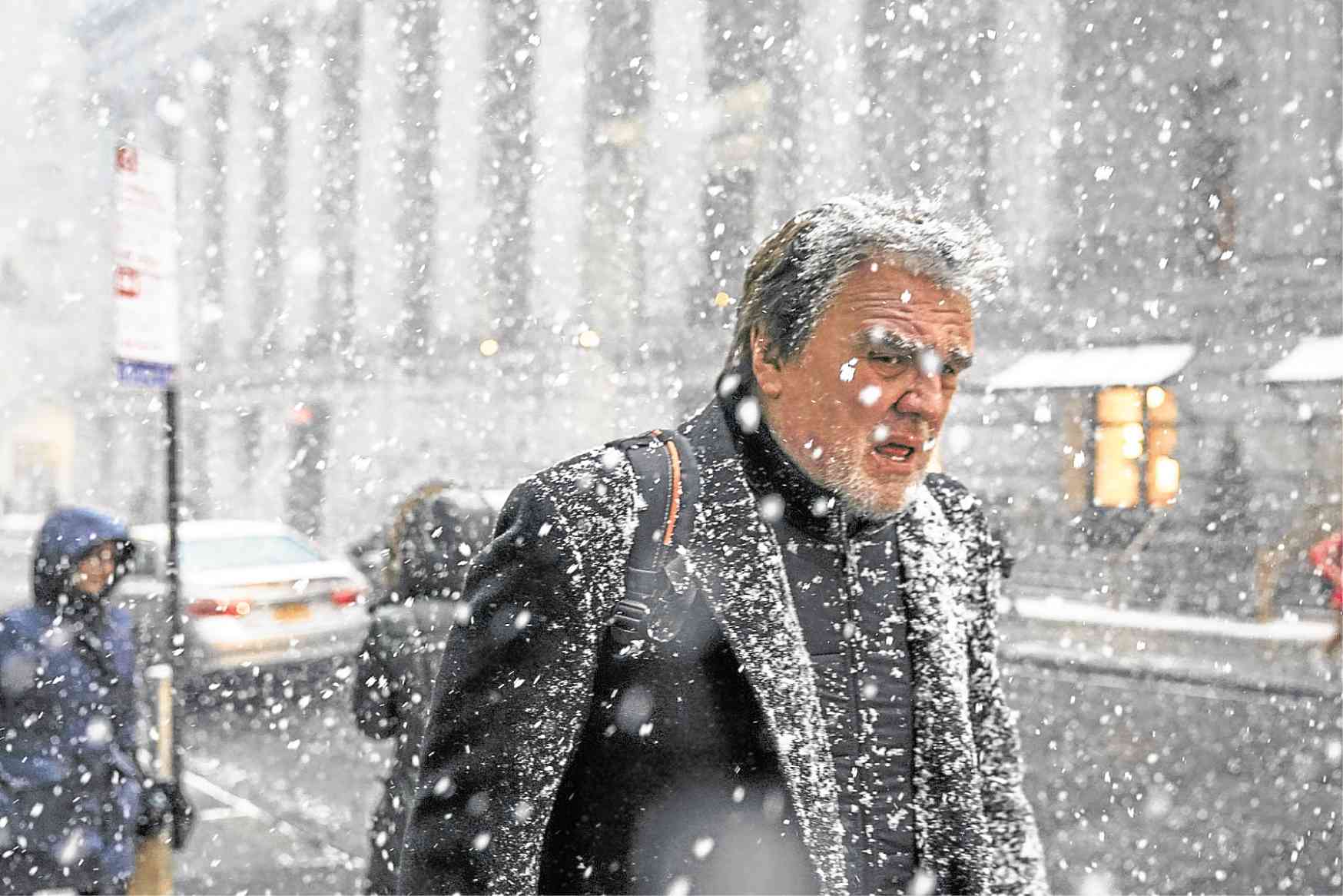 EXTREME CHILL Pedestrians brave the brutal cold wave in New York’s financial district on Jan. 30. The frigid air from the polar vortex in the US Midwest is forecast to expand to the city over the next few days. —AFP

Authorities and health experts warned of frostbite and hypothermia.

NWS said temperatures would remain 25 to 45 degrees below average through Thursday, with wind chill values as low as minus 32 to minus 48 C.

“The dangerously cold wind chills could cause frostbite on exposed skin in as little as five minutes,” NWS said.

Hundreds of warming centers were opened to vulnerable residents like seniors, buses were employed as mobile warming spaces, and shelter capacities were increased for the homeless, including the approximately 16,000 living on the streets of Chicago.

Burke Patten, spokesperson for homeless shelter provider The Night Ministry, said some of the homeless were reluctant to go to shelters.

“The concern would be whether they are going to be able to survive in these bitter cold temperatures,” Patten said.

Flight cancellations piled up throughout the country—more than 2,700 by the evening, stranding travelers like Brandon Robinson who spent extra days at a Chicago hotel.

“I’m here until they let me leave,” Robinson said.

Remnants of a weekend snowstorm continued to plague portions of the northeast—with strong winds and blowing snow reducing visibility on roads.

Heavy snow was forecast in the northern stretches of Maine and snow squalls predicted for other parts of the East Coast. — AFP