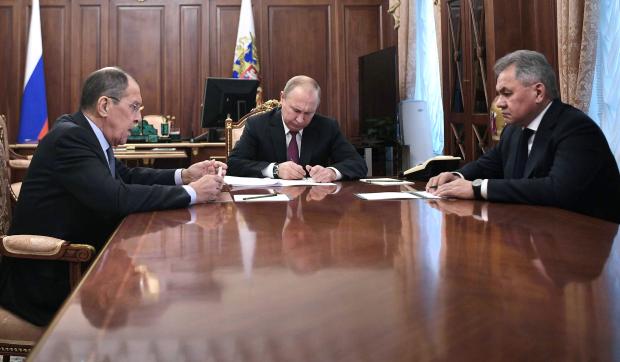 Russian President Vladimir Putin, center, attends a meeting with Russian Foreign Minister Sergey Lavrov, left, and Defense Minister Sergei Shoigu in the Kremlin in Moscow, Russia, Saturday, Feb. 2, 2019. Putin said that Russia would abandon the 1987 Intermediate-Range Nuclear Forces treaty, following in the footsteps of the United States, but noted that Moscow would only deploy intermediate-range nuclear missiles if Washington should do so. (Kremlin pool photo by ALEXEI NIKOLSKY / Sputnik via AP)

MOSCOW — Following in the footsteps of the U.S., Russia will abandon a centerpiece nuclear arms treaty but will only deploy intermediate-range nuclear missiles if Washington does so, President Vladimir Putin said Saturday.

U.S. President Donald Trump accused Moscow on Friday of violating the 1987 Intermediate-Range Nuclear Forces Treaty with “impunity” by deploying banned missiles. Trump said in a statement that the U.S. will “move forward” with developing its own military response options to Russia’s new land-based cruise missiles that could target Western Europe.

Moscow has strongly denied any breaches and accused Washington of making false accusations in order to justify its pullout.

The collapse of the INF Treaty has raised fears of a repeat of a Cold War showdown in the 1980s, when the U.S. and the Soviet Union both deployed intermediate-range missiles on the continent. Such weapons were seen as particularly destabilizing as they only take a few minutes to reach their targets, leaving no time for decision-makers and raising the likelihood of a global nuclear conflict over a false launch warning.

After the U.S. gave notice of its intention to withdraw from the treaty in six months, Putin said Russia would do the same. He ordered the development of new land-based intermediate-range weapons but emphasized that Russia won’t deploy them in the European part of the country or elsewhere unless the U.S. does so.

The U.S. has accused Russia of developing and deploying a cruise missile that violates provisions of the pact that ban the production, testing, and deployment of land-based cruise and ballistic missiles with a range of 500 to 5,500 kilometers (310 to 3,410 miles).

U.S. Secretary of State Mike Pompeo said the treaty would terminate in six months unless Russia accepts U.S. demands that it verifiably destroy the cruise missiles that Washington claims are in violation. NATO allies have strongly backed Washington and urged Moscow to save the treaty by returning to compliance.

But Russia has categorically rejected the U.S. claims of violation, charging that the missile, which is part of the Iskander-M missile system, has a maximum range of 480 kilometers (298 miles). Russian officials claimed the U.S. assertions about the alleged breach of the pact by Moscow were intended to shift the blame for the pact’s demise to Russia.

The Russian Defense Ministry on Saturday released a satellite image of what it described as new production facilities at the U.S. missile maker Raytheon’s plant in Tucson, Arizona, noting that their expansion began in 2017 as the Congress authorized spending for the development of intermediate-range missiles.

“The character and the timing of the works provide an irrefutable proof that the U.S. administration had decided to pull out of the INF treaty years before making unfounded claims of Russian violations,” it said.

Putin has argued it makes no sense for Russia to deploy a ground-based cruise missile violating the treaty because it has such weapons on ships and aircraft, which aren’t banned by the pact.

Speaking Saturday in a televised meeting with his foreign and defense ministers, Putin instructed the military to work on developing new land-based weapons that were previously forbidden by the INF treaty. Defense Minister Sergei Shoigu reported to Putin that they would include a land-based version of the Kalibr ship-based cruise missile and a new hypersonic intermediate-range ballistic missile.

Putin emphasized that such new weapons won’t be deployed unless the U.S. does so.

“Russia will not station intermediate-range weapons in Europe or other regions until similar U.S. weapons appear in those regions,” he said.

The Russian leader said Moscow remains open to talks with Washington but added it would be up to the U.S. to take the first step.

“Let’s wait until our partners are mature enough to conduct an equal and substantive dialogue on those issues,” he said.

At the same time, Putin told his ministers that he would like to review the progress on building other prospective weapons that don’t fall under the INF treaty, including the intercontinental Avangard hypersonic glide vehicle and the Poseidon underwater nuclear-powered drone.

He noted Shoigu’s report that a key stage in the testing of the Poseidon was completed several days ago. The drone is designed to carry a heavy nuclear weapon that could cause a devastating tsunami wave.

The Russian leader last year unveiled an array of new nuclear weapons, including the Avangard and the Poseidon, saying that they can’t be intercepted.

Putin also noted during Saturday’s meeting that he would like the military to prepare a response to the possible deployment of weapons in space.

The Pentagon’s new strategy unveiled last month calls for a new array of space-based sensors and other high-tech systems to more quickly detect and shoot down incoming missiles.

Putin instructed the military to make sure the research and development works on new weapons don’t swell military spending. He said the military must reconfigure the existing defense budget to find money for the new weapons.

“We must not and will not be drawn into a costly arms race,” he said.