Trump’s State of the Union aims for a unifying tone 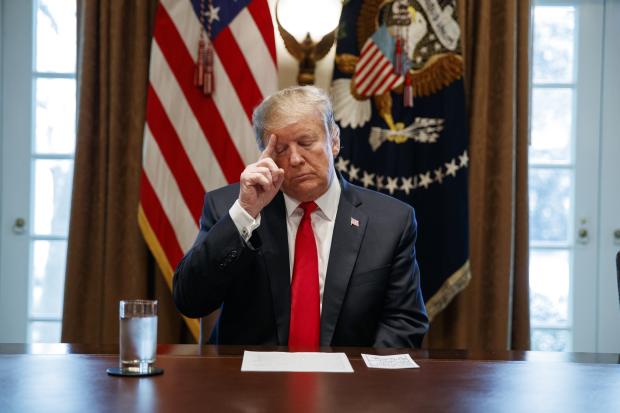 President Donald Trump looks at his notes before speaking during an event on human trafficking in the Cabinet Room of the White House, Friday, Feb. 1, 2019, in Washington. (Photo by EVAN VUCCI / AP)

WASHINGTON — President Donald Trump heads into his State of the Union address dogged by bruising midterm losses and sinking poll numbers, wounded by a blistering standoff with Democrats. But for the stately speech, he plans to embrace unity — at least for the night.

Addressing the nation at the weakest point of his presidency, Trump will seek to use the ceremonial moment to pitch a unifying vision and reset relations with Democrats. The prime-time presidential set-piece Tuesday night comes amid a bitter border wall fight that nearly derailed the speech altogether, but Trump is not expected to dwell on the rancor.

While Trump may strive for a unifying tone for the evening, harsh rhetoric has been a constant of his presidency. Previous efforts by Trump to shift gears have been short-lived and have struck many as disingenuous, given the ferocity with which he often takes on Democrats. Even on Friday, Trump was going after House Speaker Nancy Pelosi by name, calling her clueless and her ideas dangerous.

In his speech, Trump is expected to highlight rare bipartisan accomplishments from last year and push Democrats to work with him on issues of potential agreement, such as infrastructure, drug prices, and vocational training. Still, his recent struggles will be on full display as he addresses a room packed with Democrats and with Pelosi sitting right behind him.

Trump, who loves to build suspense, has teased that he could drop a big announcement in his speech, suggesting Friday he might make news on his threat to declare a national emergency to circumvent Congress in his quest to build his long-promised border wall.

“Well, I’m saying listen closely to the State of the Union. I think you’ll find it very exciting,” he said.

White House speechwriters and policy staffers have been working for weeks on the address, with the president offering considerable input, scribbling notes in his trademark black Sharpie scrawl on drafts of sections prepared by Stephen Miller and other top speechwriters, according to one White House official who, like some others, was not authorized to publicly discuss the speech and spoke on condition of anonymity.

Trump is expected to address the border, continuing to press his case for the wall, but he is also expected to make a bigger pitch about what he sees as his achievements to date and his plans for the rest of the term, said several people familiar with the planning.

Officials were quick to caution that the speech remains a work in progress and stressed that Trump will tinker with it until the final moments. A senior administration official said Trump will focus on five main areas: immigration, trade, infrastructure, drug pricing and national security. He will list what he sees as the dangers of illegal immigration and discuss his efforts to revise trade deals, including the updated agreement with Canada and Mexico.

The president will call on Congress to produce an infrastructure package and support efforts to lower the cost of health care and prescription drugs. And he will discuss military efforts around the world, stressing his interest in ending U.S. engagement in foreign wars.

He’s also expected to discuss the political turmoil in Venezuela and trade negotiations with China.

One early excerpt of the speech released by the White House: “Together we can break decades of political stalemate; we can bridge old divisions, heal old wounds, build new coalitions, forge new solutions, and unlock the extraordinary promise of America’s future. The decision is ours to make.”

The administration has also been teasing several other announcements, including on the president’s planned withdrawal from Syria.

Secretary of State Mike Pompeo said in a Fox News interview that the president would “make a significant announcement, I think in the State of the Union next week, with respect of the status of the caliphate, the real estate, the grounds from which (the Islamic State group) had been operating in Syria.” Trump tweeted Friday: “We will soon have destroyed 100% of the Caliphate, but will be watching them closely.”

And Trump told reporters he would probably be announcing the details of his upcoming second meeting with North Korean leader Kim Jong Un in the speech.

Trump is also expected to seize on recent headlines about late-term abortion amid recent scrutiny of the practice and will talk about “respect for human life,” according to the senior administration official.

Bill Galston, a presidential scholar at the Brookings Institution and former adviser in the Clinton administration, said Trump should look beyond his political base on Tuesday.

“He desperately needs to send a signal to the American people that his administration is open for business, that he is prepared to negotiate on a wide range of issues that might enable him to broaden support,” Galston said. He added that after Clinton’s losses in the 1994 midterm elections, his State of the Union speeches were “much more conciliatory. … He was much more interested in overtly laying out the possibility of common ground.”

Democrats, meanwhile, intend to use the speech as an opportunity to underscore their opposition to the president and highlight the new generation of leaders that emerged during last year’s midterm elections. Stacey Abrams, the former Democratic leader of the Georgia House of Representatives, will be offering the Democratic rebuttal.

Democrats also intend to send a message with their guests, bringing along federal workers who were affected by the government shutdown as well as Victorina Morales, an immigrant from Guatemala who was in the U.S. illegally and who had worked for Trump at his golf club in Bedminster, New Jersey.

Democrats are also preparing for the possibility of interrupting the president to make their opposition known — something House Whip Steny Hoyer, D-Md., said Trump shouldn’t be surprised by.

“I think we ought to comport ourselves in a considered way. But I think his speeches are almost always to fire people up. And he should not be surprised that there is an opposite reaction,” Hoyer said. “He fires up his people, but he fires up the opposition to what he’s saying or doing or suggesting.” /atm