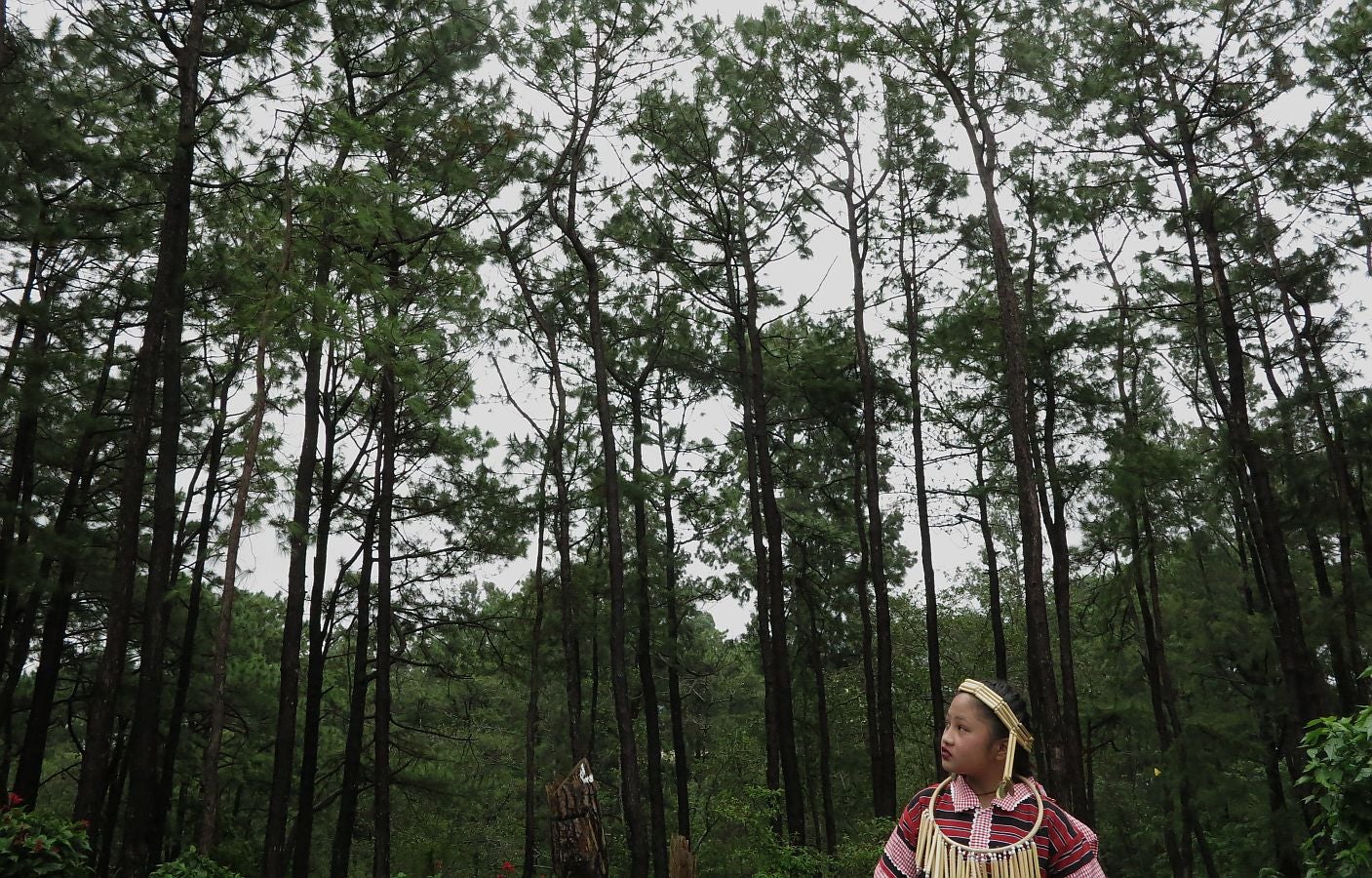 PINE COVER Children in Baguio City are seeking President Duterte’s help to save a patch of pine trees in a government property at the summer capital’s business district. —EV ESPIRITU

BAGUIO CITY – Jewel, a kindergarten pupil here, drew numerous stick figures of girls, surrounded by pine trees under a blue sky. The drawings accompanied her short handwritten message to President Duterte: “Please help us save the trees. Trees are what we need, not buildings. Thank You.”

Aiofe, her schoolmate, expressed the same sentiment in a letter she cut out in the shape of a tree: “Please don’t let them cut our trees here in Baguio. This is for our future. I love trees.”

These are some of more than 60 letters from pupils of the Baguio Pines Family Learning Center who have asked the government to stop developers from leasing a 1-hectare pine tree park here.

The letters were addressed to Duterte and delivered to city hall early this week by 17 grade schoolers and their teachers.

Mayor Mauricio Domogan told them that the custodian of the pine tree stand—the Government Service Insurance System (GSIS)—might not be willing to sell it to the city government.

He promised to endorse the letters to Malacañang. “I trust [the national government] will listen to you, children,” he said. 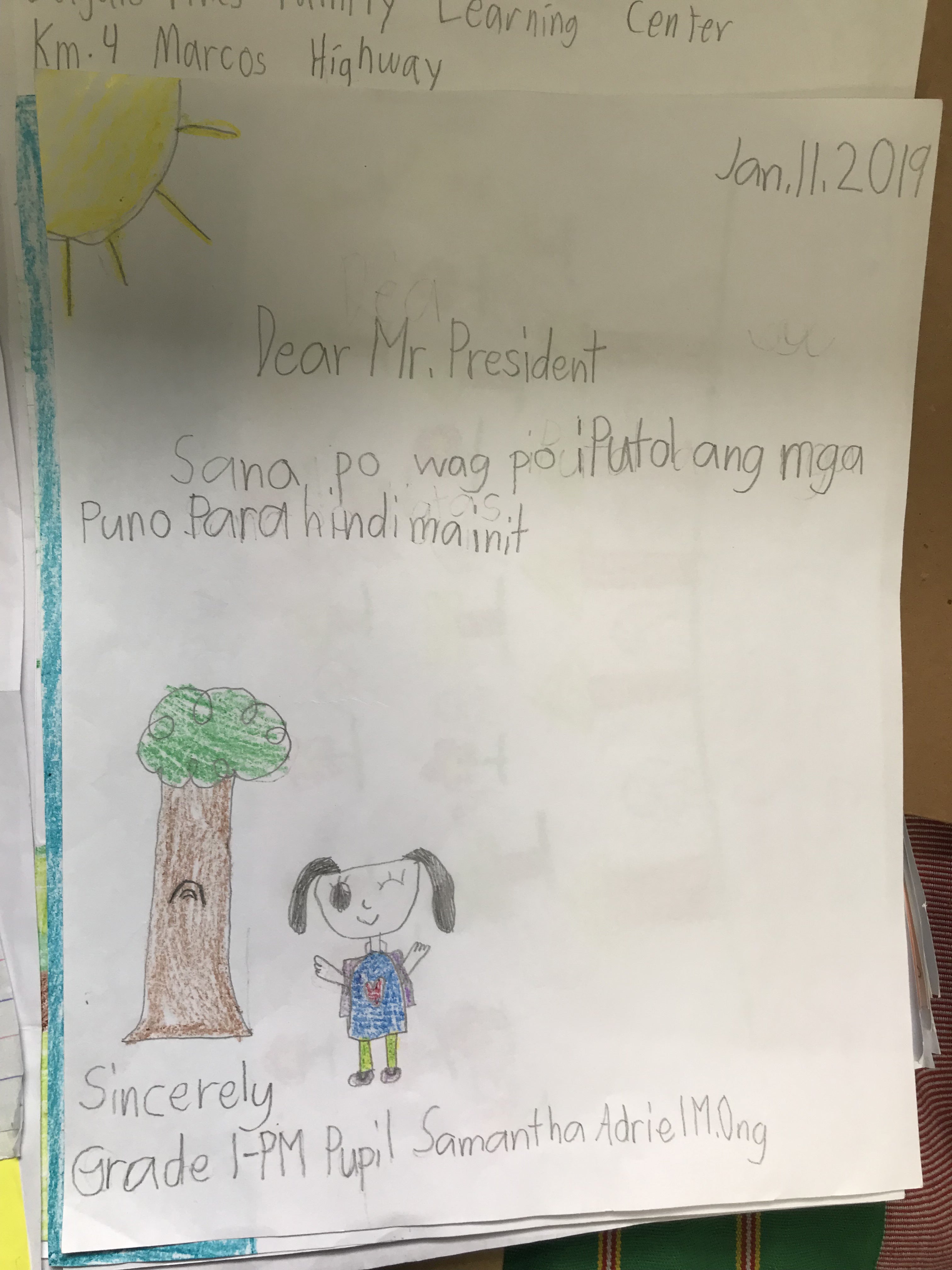 A letter addressed to President Duterte talks about the value of trees to Baguio residents. -VINCENT CABREZA

The park is surrounded by the summer court houses of the Supreme Court and the Court of Appeals, the University of the Philippines Baguio and Luneta Hill, which is now owned by a shopping mall.

The pine trees are right beside the Baguio Convention Center, which the city government bought from the GSIS in 2012.

The convention center and the wooded lot were given to the GSIS through presidential proclamation during martial law, and were classified as a “GSIS investment area,” the GSIS informed the city government.

In 2008, the GSIS offered the park to a developer, triggering a public outcry and protests from church leaders, members of environmental groups, students and teachers.

Heeding the protesters, the city government did not issue development permits for the pine tree stand, which a city zoning ordinance had designated as a park.

The GSIS sued Baguio but the city government eventually offered to buy the tree park in 2016 and again in 2017.

According to Domogan, the GSIS was willing to study the offer and had valued the area at P400 million and then at P670 million. But it recently informed the city government it was no longer interested in selling the property, he said.

Alcina Dominique Flores, a Grade 6 pupil who served as the children’s spokesperson, asked Mr. Duterte to heed their plea, saying they also wrote to former President Gloria Macapagal-Arroyo in 2008 when the tree park was first offered for lease.

“Since Baguio is known as the City of Pines, I believe that title is worth more than what any corporation can offer … for how can we be the City of Pines if we don’t even have pine trees?” she said.