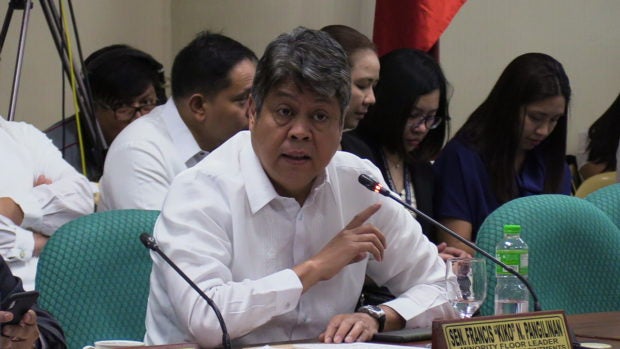 MANILA, Philippines—Senator Francis “Kiko” Pangilinan on Friday likened Presidential Spokesperson Salvador Panelo to a “Chinese puppet” for his remarks that the country should be thankful to China if it built a maritime rescue center on the Kagitingan Reef in the West Philippine Sea (WPS).

This is after Panelo, in a Palace briefing on Thursday, said the Philippines should be “thankful” to China if it indeed built a maritime rescue center on the Philippine-claimed area in the WPS.

“One would wonder sometimes which country he was speaking for. His every tone clearly manifests the language of a Chinese puppet,” Pangilinan said in a statement.

Pangilinan noted that Panelo was the same official who earlier said that it was alright for the Chinese to fish in Spratlys waters.

“He also called the decision of the Permanent Court of Arbitration in The Hague that validated the Philippines’ claims on the disputed territories in the West Philippine Sea as ‘useless as there is no country or body on earth that can enforce’ it against China,” the senator said.

READ: Panelo on PH arbitration case vs China: Who will enforce it?

The Liberal Party president added that the opposition senatorial candidates, also known as the “Otso Diretso” slate, “will continue to take the side of the Filipino people, especially those directly affected by the encroachment of the Chinese into our waters, keeping Filipino fishermen from their source of livelihood.” /jpv