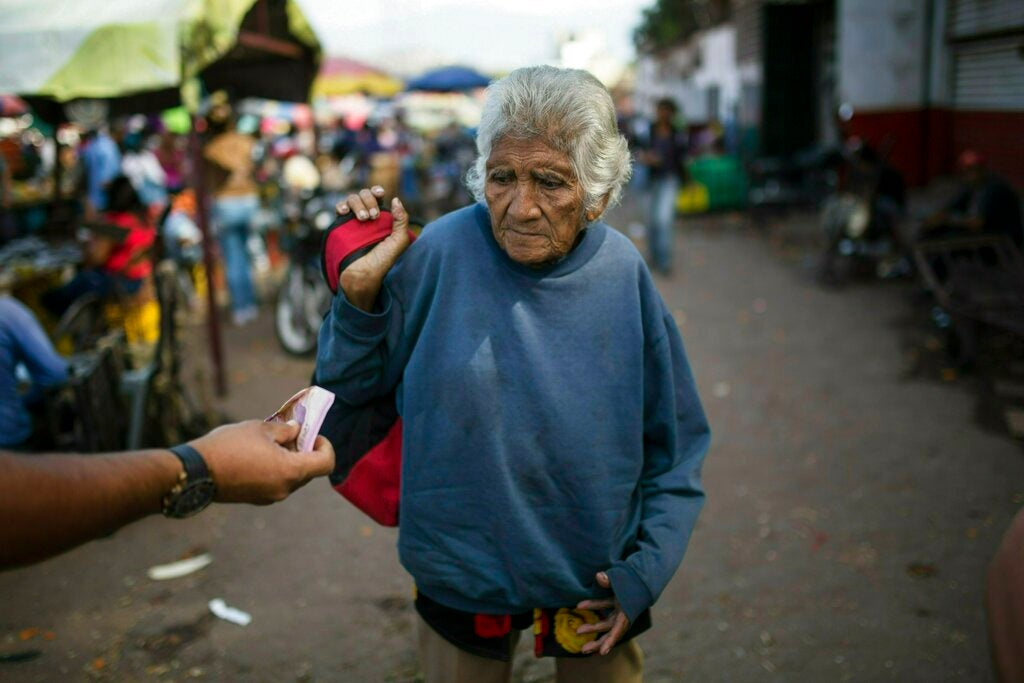 An elderly woman is offered cash as she begs at a wholesale food market in Caracas, Venezuela, Monday, Jan. 28, 2019. Economists agree that the longer the standoff between the U.S.-backed opposition leader Juan Guaido and President Nicolas Maduro drags on, the more regular Venezuelans are likely to suffer. (AP Photo/Rodrigo Abd)

CARACAS, Venezuela — Venezuelan President Nicolas Maduro has pressed his case directly to the American people, asking for their help preventing a “Vietnam in Latin America.”

In a 45-second video shot late Tuesday from the presidential palace and addressed to “the American people,” Maduro said the Trump administration is behind an attempt to overthrow him in a coup.

He said the United States is looking to get its hands on Venezuela’s abundant oil reserves, replicating U.S. military interventions in Iraq and Libya.

But he said he’s confident that he’s on the “right side of history” and pleaded with regular Americans to keep U.S. troops out of the country.

The wife of a rebel military officer, who Maduro has accused of plotting his overthrow, said he has been arrested after sneaking back into Venezuela amid the country’s upheaval.

Sorbay Pailla said she last heard from her husband, retired National Guard Col. Oswaldo Garcia Palomo, on Sunday after he entered the country clandestinely from Colombia. She said contacts within the DGCIM military intelligence unit told her that he was arrested in the western state of Barinas.

The Associated Press was unable to confirm the arrest and the government has yet to comment. But Luis Almagro, the head of the Organization of American States, condemned late Tuesday what he called the “kidnapping” of Garcia Palomo.

Garcia Palomo has been an outspoken critic of Maduro who has been open for months about his intent to amass a military force in exile to remove the Venezuelan president.

Trump tweeted Wednesday there’s a “Massive protest expected today.” He said, “Americans should not travel to Venezuela until further notice.”

Venezuelan opposition leader Juan Guaido has been looking to increase pressure on Maduro with nationwide walkouts. Guaido declared himself Venezuela’s rightful leader a week ago and said the nation “is set on change.”

The U.S. and many other nations back Guaido. Trump has imposed sanctions that could starve Venezuela of billions of dollars in oil revenue.

Trump tweeted: “Maduro willing to negotiate with opposition in Venezuela following U.S. sanctions and the cutting off of oil revenues. Guaido is being targeted by Venezuelan Supreme Court.”

Maduro said he is willing to negotiate with the country’s opposition, in remarks during an interview with Russian state-owned RIA Novosti news agency also on Wednesday.

Maduro told RIA Novosti that he is “willing to sit down for talks with the opposition for the sake of Venezuela’s peace and its future.” Maduro said the talks could be held with mediation of other countries.

Russia is one of the staunchest supporters of Maduro and has offered to mediate. /kga

Read Next
Murder of peace consultant outrages NDFP
EDITORS' PICK
Timeless Elegance in the Philippines’ Most Distinguished Home Kitchens
James Reid, Nadine Lustre confirm split
Pilot test of motorcycle taxis may be ended early
Asean accepts Trump invite to US meet
What exactly did Vilma Bautista — Imelda’s ex-aide — do?
‘A greener, cleaner tomorrow’: A how-to guide for Filipinos who want to help with today’s energy crisis
MOST READ
Taal Volcano and surroundings have become ‘inflated’
Ayala Land bares facts on Technohub deal: P4B in lease to UP
If Marcos runs in 2022 polls, he must accept results – Robredo
Duterte legacy: Chinese criminals
Don't miss out on the latest news and information.