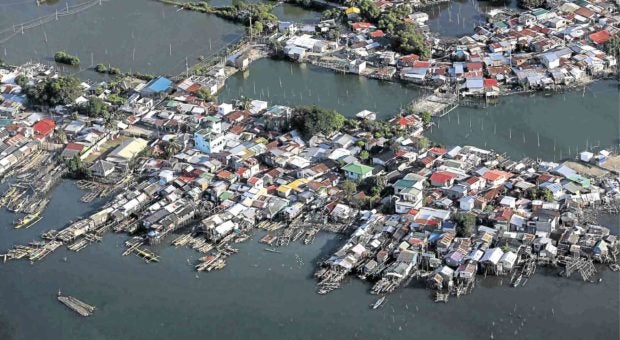 BAY LIVING Communities of informal settlers in sections of Manila Bay, like this settlement at the border of Cavite province and Parañaque City, have been blamed for polluting the waters shared by Metro Manila and its nearby provinces. —LYN RILLON

The Department of Environment and Natural Resources (DENR) has urged local governments to apply for and maximize national government subsidies intended for sewage treatment facilities.

According to Maria Paz Luna, DENR regional director in Calabarzon (Cavite, Laguna, Batangas, Rizal and Quezon), about P200 million is available under the National Sewerage and Septage Management Program (NSSMP).

Under the Clean Water Act of 2004, the national government sets aside subsidies and puts the money in the care of the Department of Public Works and Highways for sewerage and septage projects.

The NSSMP, however, remains unused, if not fully utilized, due to lack of applicants among local government units (LGUs).

Luna, in a telephone interview, brought this up in light of the government’s program to rehabilitate the 2,000-square-kilometer Manila Bay.

Luna said Calabarzon had the biggest population of informal settlers at 144,000.

At Bacoor City in Cavite province alone, about 12,000 families live along the coastlines of Manila Bay.

The lack of septic tanks or access to treatment facilities has forced communities to drain sewage and household waste into rivers and tributaries, the DENR said.

Luna said about 80 percent of a person’s average daily water consumption ended up as waste.

She said septage management was a problem “ignored for a long time.”

Coliform level in Manila Bay tests as high as 330 million most probable number per 100 milliliters. The government aims to bring this down to a “compliance level” of at least 100 MPN per 100 ml.

About 2,500 DENR employees and other volunteers from the region took part in the Manila Bay cleanup drive on Sunday in Bacoor City; Baras town in Rizal province; and Los Baños town in Laguna province.

The DENR on Tuesday said 12,944 kilograms, or 1,154 sacks of trash, were collected from riverbanks and coastal areas in Bacoor. —MARICAR CINCO