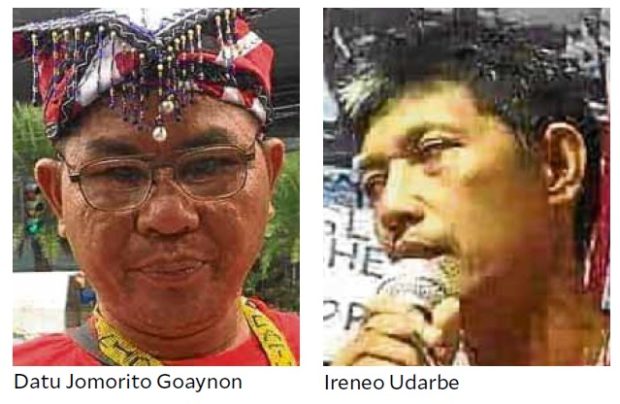 DAVAO CITY—Two leaders of militant groups left their base in Cagayan de Oro City for Bukidnon province on Monday to meet with a group of “lumad” (indigenous peoples) who sought their help in setting up a dialogue with the military.

But Datu Jomorito Goaynon, regional chair of the lumad group Kalumbay, and Ireneo Udarbe, chair of Kilusang Magbubukid ng Pilipinas (KMP) in Northern Mindanao region, did not reach their destination in Talakag town that day.

They also failed to return home, according to Fr. Allan Khen Apus, who is speaking for human rights group Karapatan in Northern Mindanao.

Apus said Goaynon and Udarbe were last seen at 10 a.m. on Monday leaving the village of Bulua in Cagayan de Oro for a meeting with members of Pig-uyonan, a chapter of Kalumbay, in Bukidnon.

“We learned that the purpose of their meeting with Pig-uyonan members … was to look into the reported harassment and threats that members of the group were [receiving] from the military. It was on the same day (Jan. 28) that a dialogue was set between Pig-uyonan and the military’s 65th Infantry Battalion (IB), which was to be facilitated by the Commission on Human Rights,” Apus said.

The Inquirer’s calls to military officials in Northern Mindanao went unanswered on Tuesday.

Michael Pineda, spokesperson for the regional KMP, said the last information that his group received from Goaynon and Udarbe came at 11 a.m. on Monday, advising them that they were stuck in traffic on the way to the meeting.

“The two never got to their meeting place. None of their relatives or friends had seen or heard from them afterward,” Pineda said.

“Twice, calls to Datu Jomo were picked up but no one answered. His phone can no longer be reached [on Tuesday]. Udarbe’s phone was still ringing but no one was picking it up,” he added.

Pineda said Goaynon and Udarbe had been subjected to monitoring by suspected military personnel.

Apus said the leaders earlier informed their colleagues that they noticed two men on a motorcycle following them after they attended a meeting in Bukidnon on Jan. 24.

“We appeal to the public to help us find them. Right now, their safety … is our utmost concern,” Apus said.

On Jan. 22, Goaynon filed a complaint against the 65th IB for harassment. Earlier, a tarpaulin featuring a photograph of Goaynon was put up in Talakag and accused him of recruiting his fellow lumad to the New People’s Army.

The Moro group Suara Bangsamoro asked authorities to find Udarbe and Goaynon, one of the founding leaders of Sandugo Alliance of Moro and Indigenous Peoples for Self-Determination.

“Goaynon led his tribe’s struggle to defend their ancestral land from encroachment. Peasant leader [Udarbe] is in the forefront of their community’s assertion against the proposed conversion of their farmlands to oil palm plantation. Both of them have publicly deplored martial law and the horrors it casts upon the people of Mindanao,” Jerome Aba, chair of Suara Bangsamoro, said in a statement.