newsinfo / Headlines
Headlines
WHATEVER HAPPENED TO...? 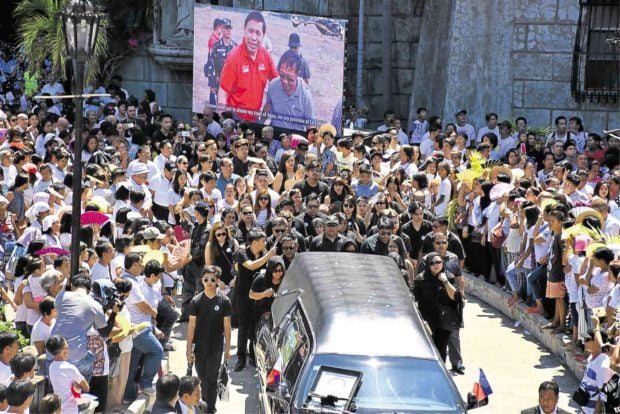 POLITICAL ATTACK In this photo taken in May last year, supporters join relatives of slain former La Union Rep. Eufranio Eriguel during his funeral in Agoo town. The official’s family believes politics is behind the attack. —WILLIE LOMIBAO

The first month of 2019 is almost gone but the police have yet to end their investigations of the killings last year of three local government executives, a prominent businessman and an Islamic scholar in Central and northern Luzon.

While special task forces have been formed to go after the killers, the police can come up with two arrested suspects, as in the murder of former La Union Rep. Eufranio Eriguel on May 12, and Mayor Alexander Buquing of Sudipen town, La Union, on Oct. 1.

In the rest of these high-profile cases, the police have faced the proverbial “blank wall.”

On May 12, police arrested Felizardo Villanueva, 67, a losing candidate for village chief, hours after gunmen shot and killed Eriguel as he spoke in a meeting at Barangay Capas in Agoo town, La Union.

Three people were also killed while several others were injured during the attack, which, police said, was staged by at least nine men.

But Villanueva is the only one now facing murder and frustrated murder cases at the Regional Trial Court in Agoo. The other suspects remain at large.

Eriguel’s widow, La Union Rep. Sandra Eriguel, had insisted that the killing of her husband was politically motivated and that the mastermind was still free.

The other suspect arrested by police was Rosendo Obidoza Sibayan, 29, who was believed to be the triggerman in a group of five suspects who ambushed and killed Buquing.

Seized from a raid on Sibayan’s house in Balaoan town, La Union, were six bullets and a spent shell for a 5.56mm M16 rifle, the same type of bullets that investigators found at the area where Buquing was killed.

Police have no suspect yet in the gunslaying of Balaoan Vice Mayor Al-Fred Concepcion on Nov. 14.

Concepcion’s two-vehicle convoy, which was bringing him and his daughter, Mayor Aleli Concepcion, to the town hall, was peppered with bullets by gunmen who fired from both sides of the road.

Mayor Concepcion survived the ambush. Her father’s aide, Michael Ulep, died while eight others were hurt.

Early this month, the family raised to P10 million the reward for the arrest of the killers. Concepcion’s son, Board Member Carlo Concepcion, said the only reason his father was murdered was politics.

Two months after Dominic Sytin, 51, founder and chief executive officer of United Auctioneers Inc. and part owner of a resort at Subic Bay Freeport, was killed by a lone gunman outside Lighthouse Marina Resort on Nov. 28, a special investigation task force has yet to arrest the suspect.

A few days after the attack, Sytin’s family offered a P1-million reward to anyone with information that would help identify the gunman or the mastermind.

Sytin first gained prominence in the early 2000s when he entered the used vehicle import scene, bringing in secondhand right-hand-drive cars, vans and sport utility vehicles through the free port, and converting these to left-hand-drive, street-legal units.

Senior Supt. Benjamin Sembrano, Olongapo City police chief, said the assailant’s motorcycle was found near the crime scene and had been sent for forensic examination.

Police said they were looking at business and labor issues as possible motives behind the attack.

Describing him as a “misunderstood” peace advocate, cyclists joined friends and the family of Islamic scholar and cleric Bedejim Abdullah in a memorial program in Baguio City to clamor for justice for his death.

Abdullah was on his way to his office near the Baguio public market on Dec. 6 when a man approached and shot him several times. His office is a few meters from the Baguio police station.

The case remains unsolved despite police efforts to “leave no stone unturned” and the city’s Maranao community’s plea to seek justice for the scholar, said lawyer Yasser Guro, provincial director of the National Commission on Muslim Filipinos.

Abdullah made “great strides in propagating Islam, to make himself associated with other faiths [through a Baguio ecumenical or interfaith movement] … reaching out to non-Muslim areas to educate them about the Muslim faith and its people,” Guro said, adding that “despite [his] noble endeavors … he was misunderstood [by some sectors] to have [had] linkages with extremism.”

A task force had been formed to investigate the murder, and photographs and security camera footage of the gunman had been circulated. —Reports from Gabriel Cardinoza, Joanna Rose Aglibot, Valerie Damian and Vincent Cabreza