Snow wallops US Midwest as it braces for extreme cold 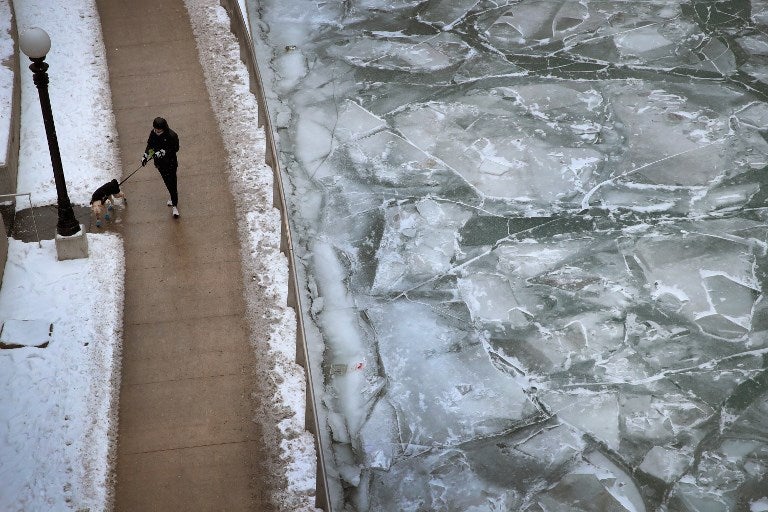 Ice collects on the Chicago river on January 3, 2018, in Chicago, Illinois. Record cold temperatures are gripping much of the U.S. and are being blamed on several deaths over the past week. AFP

CHICAGO, United States – The US Midwest dug out Monday from a snowstorm that closed schools and businesses, as millions braced for dangerous sub-zero temperatures that could shatter records.

School districts in Minnesota and Wisconsin canceled classes and government offices, universities and businesses shuttered, with the mercury expected to drop to a polar -40 Fahrenheit (-40 Celsius).

“The arctic air, together with brisk winds, can lead to dangerously cold wind chill values.”

In Wisconsin, where nearly a foot (30 centimeters) of snow was measured in one location, Governor Tony Evers declared a state of emergency, freeing up the Wisconsin National Guard for emergency work, if needed.

More than 1,000 flights were canceled at two airports in Chicago, a major regional hub and America’s third largest city, in nearby Illinois.

On the heels of the storm, nearly a dozen states braced for a blast of arctic air known as a polar vortex, which was expected to lower temperatures well below normal and far below zero.

The frigid air mass had veered from its usual path and was forecast to fall into the Midwest beginning Tuesday. The chill was expected to bring temperatures to extreme lows by Wednesday and last through Thursday.

Temperatures were expected to plummet to between -10 to -40 degrees Fahrenheit in a vast area stretching some 1,200 miles from the Dakotas to parts of Ohio.

Wind chill would make temperatures feel more like -30 to -65 degrees Fahrenheit, according to NWS.

On Tuesday, the snow storm was expected to move to the northeast, where it could dump another 8 to 12 inches of snow in some areas.

In Wisconsin’s biggest city, Milwaukee, downtown streets were virtually deserted Monday and every major highway in the state covered in ice or snow, according to the Milwaukee Journal Sentinel.