Esperon to verify if Jolo twin blasts linked to BOL 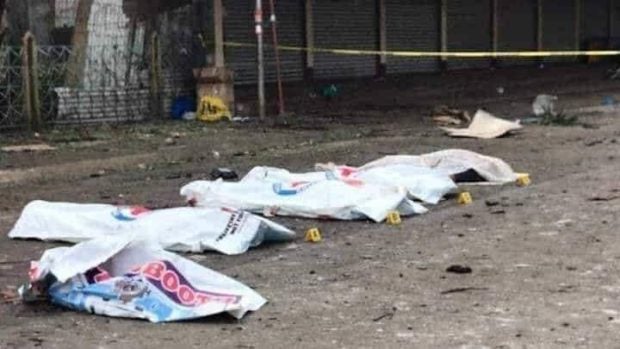 Jolo town mayor Kherkar Tan shared photos of explosions inside and outside of Mount Carmel Cathedral in barangay Walled City in Jolo around 8:20 a.m. January 27

MANILA, Philippines — National Security Adviser Hermogenes Esperon Jr. said that they have yet to establish if the deadly explosions in Jolo, Sulu is related to the “all-important” Bangsamoro Organic Law (BOL).

Esperon’s statement came following the twin blasts in a Roman Catholic church in Jolo, Sulu that killed at least 27 and injured 77 others.

He pointed out that the bombings happened only days after the ratification of the BOL.

“I have to add that the explosion comes after the success of the plebiscite for the BOL,” Esperon said on Sunday.

“We have yet to establish if the 2 explosions are related to the all-important BOL,” he added.

The first part of the BOL plebiscite was held last January 21 in the ARMM provinces of Maguindanao, Lanao del Sur, Sulu Basilan, and Tawi-Tawi as well as in Isabela City in Basilan and Cotabato City.

The BOL seeks to replace existing poverty- and conflict-wracked Autonomous Region in Muslim Mindanao with a potentially larger, better-funded and more powerful region named Bangsamoro for the minority Muslims.

“The BOL ends the secessionist narrative. The BOL signifies the end of the war for secession. It stands for peace in Mindanao,” he said.

Esperon, meanwhile, tagged those behind the deadly twin blasts as “mass murderers” and “extremist criminals.”

“We will not allow them to spoil the preference of the people for peace. Security forces have tightened up the systems to secure Sulu and the rest of BARMM. Peace must prevail over war,” he said. /je