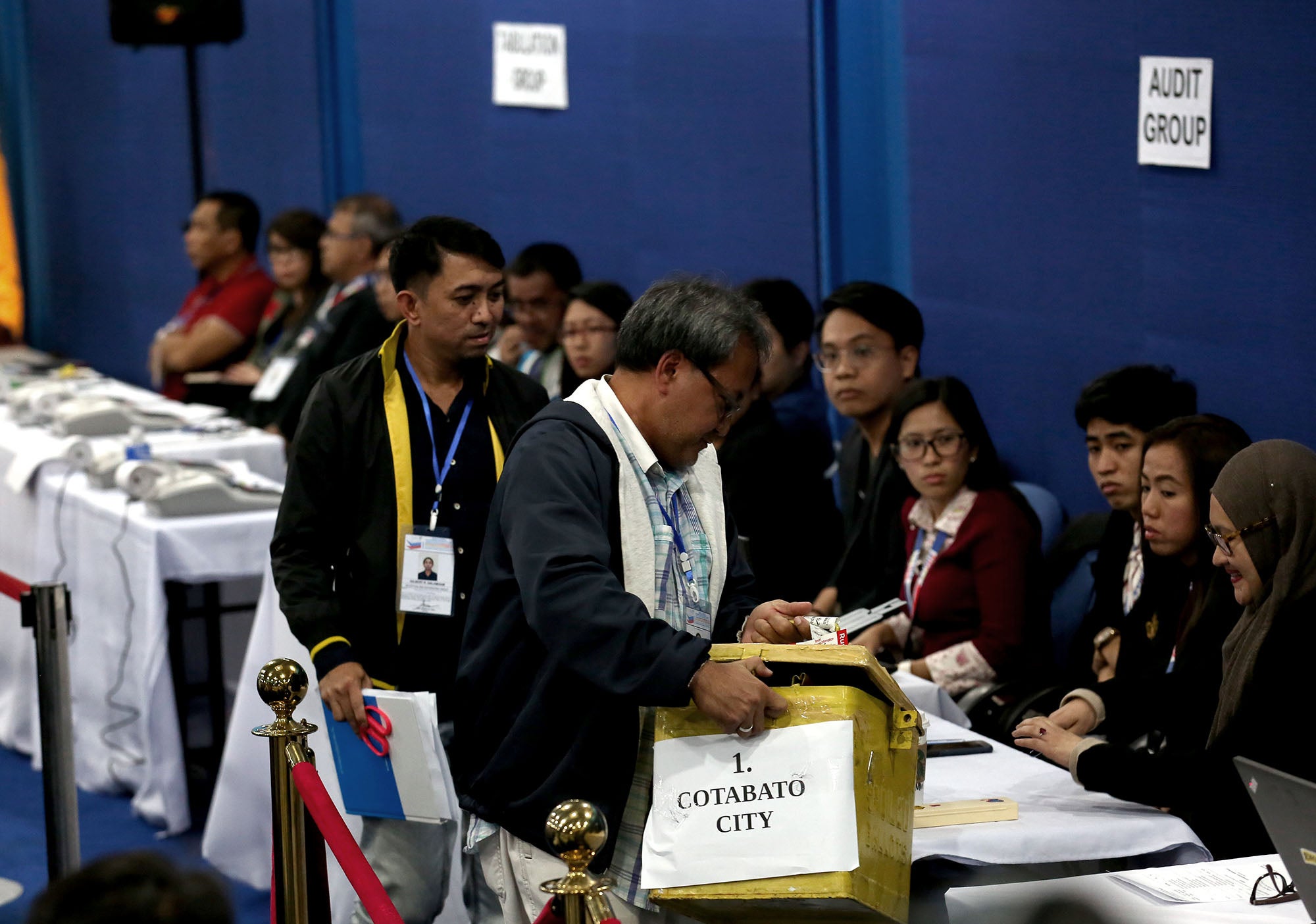 DISPUTED RESULT Election officers submit the certificate of canvass from Cotabato City at the national canvass for the Bangsamoro Organic Law plesbiscite at the Commission on Elections office in Manila. —RICHARD A. REYES

“The Comelec hereby proclaims Republic Act No. 11054, otherwise known as the organic law for the BARMM, as deemed ratified, considering that [the] majority of the votes cast with all the provinces and cities of the present (Autonomous Region in Muslim Mindanao) voting as one geographical area is in favor of the approval of the [Bangsamoro] Organic Law,” Comelec Chair Sheriff Abas said.

The ratification of the Bangsamoro Organic Law (BOL) is widely considered as a crucial factor in ending the five-decade-old Muslim rebellion in Mindanao.

Commissioner Susana Anayatin of the Bangsamoro Transition Commission said the ratification of the organic law “marks the beginning of a new government and another journey toward peace.”

More than 1.5 million voters in the present ARMM voted in favor of the law. With the ARMM vote counted as one, Sulu’s disapproval of the new region did not affect the overall outcome.

Sulu is the bailiwick of Nur Misuari, the leader of the rival Moro National Liberation Front, which opposes the creation of the BARMM.

Abas said a report of the ratification of the law would be submitted to President Duterte, the Senate and the House of Representatives as the Comelec prepares for the Feb. 6 plebiscite in other areas in Mindanao that could be included in the BARMM.

The Feb. 6 plebiscite will be held in the province of Lanao del Norte, except Iligan City; the municipalities of Aleosan, Carmen, Kabacan, Midsayap, Pikit and Pigkawayan in North Cotabato province; and 28 barangays which petitioned the Comelec for inclusion.

Deliberations on the city’s certificate of canvass were briefly delayed on Friday over allegations of fraud, with lawyer Raissa Jajurie citing reports that 80 election returns had erasures and had been “tampered with.”

Basilan province voted overwhelmingly for inclusion in the BARMM with 144,640 votes. The no vote count was 8,400.

Christian residents of Cotabato City expressed excitement—as well as anxiety—over the results of the Jan. 21 plebiscite.

The city, which had voted twice against Muslim autonomy in previous years, opted for inclusion this time.

Iqbal also denied reports that non-Muslims would be prevented from celebrating Christmas and hearing Mass or that their freedom of movement would be curbed once the BARMM is in place. —WITH REPORTS FROM JOVIC YEE, DIVINA SUSON AND RICHEL UMEL