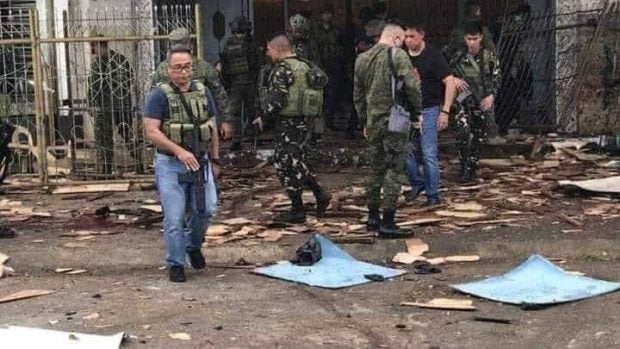 MANILA, Philippines (Updated) — Senators expressed outraged on Sunday as they called on the police authorities to conduct a “thorough investigation” into the blasts that happened in Jolo, Sulu, early Sunday.

Sen. Sonny Angara urged the authorities to go after the perpetrators of the bombing incident as they should be held accountable for the death of dozens of individuals.

“I call on our police authorities conduct a thorough investigation, go after the perpetrators and hold them accountable for this cowardly act. The innocent victims deserve justice,” Angara said in a statement.

Sen. Bam Aquino also called on the authorities to probe the incident as he reminded the public in Jolo, Sulu to remain calm and vigilant amid the blast.

Sen. Nancy Binay also urged the police to “look deeply” into why such incidents happened in the region as she raised questions such as: Why is peace so elusive?

The twin blast happened in Jolo, Sulu came two days after the ratification the Bangsamoro Organic Law that aims to solve the conflict in Mindanao.

“It is quite saddening that while there are initiatives to finally end the conflict to have permanent peace, there are also those who continue to terrorize and find ways to derail and impair the gains for peace,” Binay said.

For Sen.  Juan Miguel Zubiri, he said that the people of the “dastardly act” clearly wanted to taint the victory of the BOL ratification.

He also urged the Philippine National Police (PNP) and the Armed Forces of the Philippines (AFP) to “double up” its visibility in Mindanao in order to avoid similar incidents to happen.

Senate President Vicente Sotto III meanwhile tagged the incident as “the highest form of cowardice” as it attacked innocent and helpless.

According to the data of the PNP Criminal Investigation and Detection Group, at least 27 individuals were already reported killed from the incident.

Seven of which were members of the AFP, while 20 of them were civilians.

Data also showed that the number of injured individuals already reached 77 as of 1:10 p.m.

With this, Angara expressed concern and outraged over the twin blast that hit the Roman Catholic cathedral in Jolo, Sulu.

“I am deeply concerned and saddened by the twin explosions that rocked the Jolo Cathedral in Sulu this morning,” Angara said.

“But most of all, I am outraged that the bombings had reportedly killed five innocent individuals. This senseless act of violence must be condemned at the very least,” he added.

Sen. Joel Villanueva, meanwhile, lauded the first responders at the site of the attack as he wished for the attack against places of worship to be stopped.

“We laud the gallantry of the first responders who answered to the call of duty in rushing towards the incident area. Their response prevented more civilians from becoming victims, but it entailed sacrificing their own,” Villanueva said.

Sen. Richard Gordon, who is also the chairman of the Philippine Red Cross, said that all of its units are on full alert following the blast.

“The bombing of the Mount Carmel Cathedral in Jolo, Sulu resulting in 27 dead and 73 wounded so far, is a dastardly act that must make us acutely aware of the need to be more inclusive, humane, and just—at all times,” he said.

“All chapters are on FULL ALERT. We have two staff members who are injured. Stay safe and let us all do our duty,” Gordon added.

Sen. Francis Pangilinan meanwhile called on the public not to be distracted by “violent elements” as the region tries to attain peace.

“Let us not be distracted and defeated by warmongers and violent elements in our midst,” Pangilinan said.

“We have come such a long way in our quest to realize the peace we have long desired for Muslim Mindanao. Let’s not allow it to be derailed this time,” he added.

Both the PNP and the AFP condemned the attack as the two agencies of the government vowed to probe and identify the perpetrators of the bombing. /je /atm