Koko urges Comelec to decide pending cases based on merit 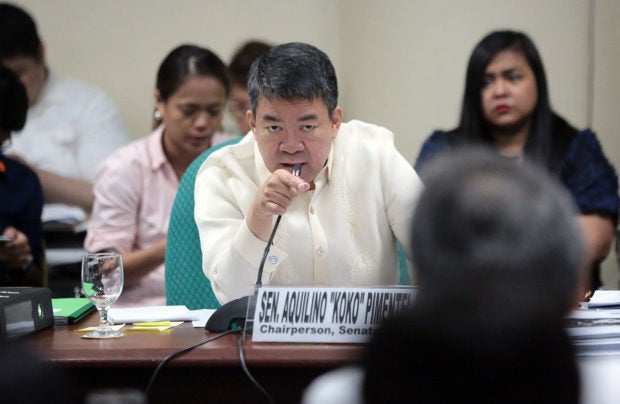 MANILA, Philippines–While he expected his inclusion in the list of candidates for the midterm elections, Senator Koko Pimentel urged on Saturday the Commission on Elections (Comelec) to decide on pending cases based on merits and not on technicalities.

Pimentel is currently facing two disqualification cases, claiming that the senator could no longer run for another term after already serving two consecutive terms in the Senate, which is prohibited under the 1987 Constitution.

“That my name is to be on the ballot is to be expected because I filed my certificate of candidacy for senator and I’m an incumbent (hence not a nuisance candidate),” Pimentel said in a text message to INQUIRER.net

“But the Comelec, in fairness to the candidates, must decide on the disqualification cases pending before it with speed and consistency. Candidacies must and should be decided on the merits and not on technicalities like ‘a pending DQ case,'” he added.

Clarifying his earlier statement, Pimentel said that the fate of the public officials running for office should be left to the will of the people.

He said that the disqualification (DQ) cases alone is already affecting the way politics run.

“What I meant was ‘candidacies must and should be decided BY THE PEOPLE on the merits and not on technicalities like ‘a pending DQ case,'” Pimentel said in a separate text message.

“The pendency of a DQ case itself affects politics [because] the voters can and will be influenced by its pendency hence that is a “technicality” [which] must [be] avoided. Comelec must swiftly decide on these DQ cases so the candidates will win or lose based on their merit as candidates,” he explained.

According to the partial list of senatorial candidates for the midterm elections, 76 names were included in the roster.

However, Comelec Spokesperson James Jimenez said that 13 of these candidates are still awaiting finality for their inclusion in the list.

“The 13 names will be identified this afternoon, to give time for the certificates of finality to be issued,” Jimenez said.

“Should a certificate of finality be issued, these 13 names will be stricken off the list,” he added. /jpv