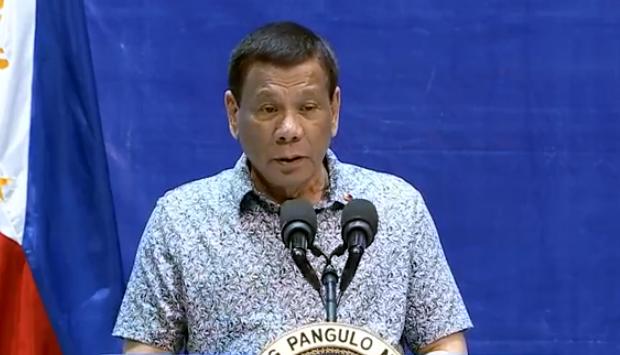 President Rodrigo Duterte addresses thousands of members of the Tricycle Operators and Drivers’ Association (TODA) Summit at the Cuneta Astrodome in Pasay City on Wednesday, Jan. 23, 2019. (Photo from an RTVM video)

MANILA, Philippines — Weeks before the official start of the campaign period for the May 2019 elections, President Rodrigo Duterte called on Filipinos to vote for candidates suitable for government work and who would always put the country in mind.

[When it comes to government, please pick people who are suited for the government.]

[Have pity on your country.]

The President then described his former aide and now senatorial aspirant Christopher “Bong” Go as a hardworking man.

He also praised Francis Tolentino, who was his political adviser, as a very kind politician.

The President then reiterated that he would vote for singer Freddie Aguilar because the latter writes songs with a message.

According to presidential spokesperson Salvador Panelo, there’s nothing wrong with the President endorsing senatorial candidates ahead of the official campaign period.

Panelo also denied that Duterte was intentionally bringing his preferred senatorial candidates to his events.