Palace: Nothing wrong with Duterte’s early endorsement of Senate bets 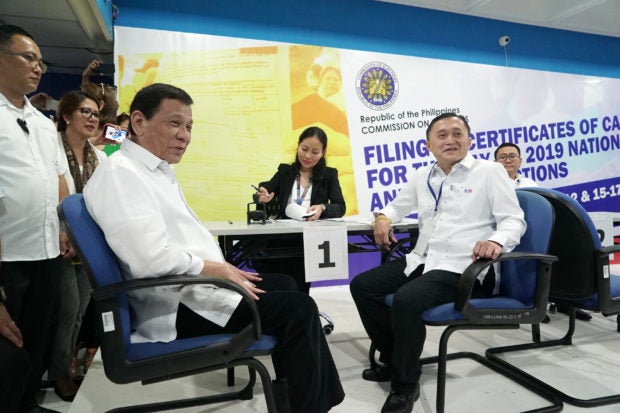 President Rodrigo Roa Duterte accompanies Secretary Christopher Lawrence “Bong” Go of the Office of the Special Assistant to the President as the latter files his certificate of candidacy for his senatorial bid before the Commission on Elections (Comelec) in Intramuros, Manila on October 15, 2018. KING RODRIGUEZ/PRESIDENTIAL PHOTO

MANILA, Philippines – There is nothing wrong with President Rodrigo Duterte endorsing senatorial candidates ahead of the official campaign period, Malacañang said on Tuesday.

Presidential Spokesperson Salvador Panelo said Duterte has not violated any election law or rule of the Commission on Elections (Comelec).

“Is there a violation? No. Comelec has said that there’s no violation,” Panelo said in a Palace briefing.

“There’s nothing wrong with endorsing or praising someone who is running for the Senate,” Panelo said.

The Palace official also denied that Duterte was intentionally bringing his preferred senatorial candidates to his events.

“The assumption that he brings candidates is incorrect. He doesn’t bring candidates. Those candidates happened to be there. These candidates are very creative, they know the schedule of the President so that they go there,” he said.

He also disagreed that the 2019 midterm elections will serve as a referendum of Duterte on his first three years in office as president.

“That’s what they said. But to me, even if an opposition wins, the message is, this President has the approval of an overwhelming majority of Filipinos,” he said.

“If they voted for you, the electorate wants you to support him (Duterte) and not to oppose him because we approve his performance. So we’re voting for you to help him and not to destroy or to attack or to make a monkey wrench of his program,” he added.

The official start of the campaign period for national candidates is on February 12.

Duterte said the 2019 elections will be clean.

READ: Duterte to 2019 bets: Do not terrorize, harass voters

He has also warned politicians  not to terrorize and harass voters. /gsg