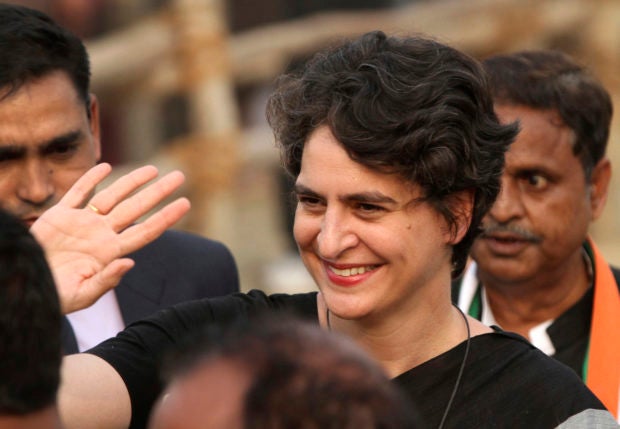 FILE- In this Thursday, Feb. 16, 2017, file photo, Priyanka Gandhi Vadra, sister of Congress party President Rahul Gandhi, waves to party supporters during an election campaign rally in Rae Barelli in the northern Indian state of Uttar Pradesh, India. Priyanka Gandhi Vadra, the scion of India’s most famous political dynasty, has formally entered party politics with opposition Congress party assigning her a position as it prepares for the national elections due before May. (AP Photo/Rajesh Kumar Singh, file)

NEW DELHI – A scion of India’s most famous political dynasty on Wednesday formally entered politics, with the opposition Congress party assigning her a position as it prepares for national elections due before May.

Priyanka Gandhi Vadra is the 47-year-old daughter of Rajiv Gandhi and Sonia Gandhi. She has in the past helped her mother and brother, party president Rahul Gandhi, campaign in their constituencies in Uttar Pradesh but had never held a party post.

She is a popular figure in Indian politics, drawing crowds wherever she goes. The party hopes to capitalize on her popularity in the coming elections where it will be challenging Prime Minister Narendra Modi’s Hindu nationalist party.

The Congress party in a statement on Wednesday announced she will hold the title of All India Congress Committee general secretary, looking after the eastern parts of Uttar Pradesh state.

The party is expected to face a tough election battle in the state with two powerful regional parties reaching an agreement that left the Congress party to fend for itself.

She is expected to campaign for the party elsewhere in the country, also in view of a formidable challenge from Modi’s Bharatiya Janata Party, which is considered to be a front-runner in the coming national elections.

She is married to a businessman and they have a son and a daughter.

Priyanka Gandhi Vadra will take up the party position in the first week of February, nearly 14 months after her brother Rahul took over as the party president from their mother, Sonia Gandhi.

Sonia Gandhi stepped down as the party’s longest-serving chief in 2017, leading the party for 19 years. She has been unwell in recent years and pushed her son to the fore.

Rahul Gandhi is the sixth member of the Nehru-Gandhi family to lead Congress. His father, Rajiv Gandhi, grandmother Indira Gandhi and great-grandfather Jawaharlal Nehru have all served as prime minister since India’s independence from British colonialists in 1947. Rahul Gandhi entered politics in 2004.

The Congress party lost to Modi’s BJP in 2014 and it suffered humiliating defeats in several state elections despite Rahul Gandhi’s active campaigning to win back support. The trend was reversed recently as the Congress party won three state elections in Rajasthan, Madhya Pradesh and Chhattisgarh states, raising the party’ hopes for a good showing in the upcoming national vote./gsg