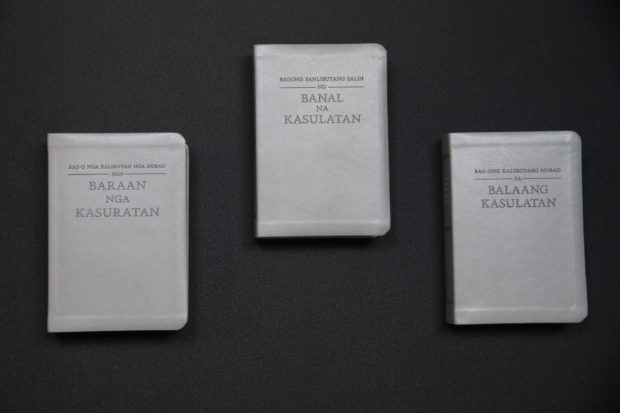 Cebuano, Waray-Waray, and Tagalog translations of the Bible are released by representatives of Jehovah’s Witnesses. Some 300,000 native speakers got their free copies recently. CONTRIBUTED PHOTO

BAGUIO CITY – To encourage Filipinos to read the Bible in their mother tongue, representatives of Jehovah’s Witnesses released the Bibles in three languages — Cebuano, Waray-waray, and Tagalog and distributed free copies to some 300,000 native speakers across the country.

The release of the Bible in three languages coincides with the National Bible Month celebration this January.

On January 20 in Quezon City, Mark Sanderson, a member of the Governing Body of Jehovah’s Witnesses, released the revised New World Translation in Tagalog.

The 123,555 people who attended the program in Novaliches and by Internet were thrilled to get their own copy of the Bible.

On January 12, Sanderson announced the completion of the Cebuano version of the New World Translation of the Holy Scriptures in Lapu-Lapu City.

The program was broadcast by Internet throughout the country to a crowd of 84,740.

The next day on January 13, Sanderson announced a new Bible in Waray-Waray at the Leyte Academic Center near Tacloban City. GOBLETH MOULIC /lzb