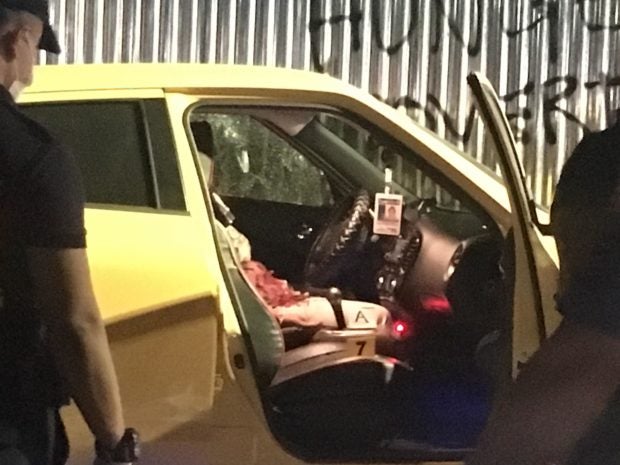 Former Cebu City Assistant City Prosecutor Mary Ann Castro was driving a yellow Nissan Juke along Escario Street around  9:50 p.m. when one of the gunmen reportedly shot her.

After the shooting, the vehicle swerved across the street and hit the galvanized iron sheets used to cover a construction site.

Physicians could no longer detect any vital signs from Castro when the medical team arrived at the crime scene.

According to police investigators, witnesses heard five bursts of gunfire in the area and saw the vehicle swerving toward a construction site.

The Inquirer tried to talk to the victim’s nephews and nieces who arrived at the crime scene shortly after the shooting, but they refused to give a statement.

The police have yet to determine the motive of the killing, but Castro had been reportedly embroiled in several controversies when she was assigned in Cebu City.

Last year, she was suspended by the Department of Justice for a conflict with the family of the late Vice Gov. Gregorio Sanchez. The Supreme Court also suspended Castro for six months in 2015 for allegedly wielding “excessive influence” after she asked the police to help her brother who complained about a defective vehicle he bought in 2001.

A six-month suspension was also imposed on Castro in 2016 for violating the rule on non-forum shopping when she filed separate petitions for annulment of marriage in two trial courts in Cebu in 2000. /ee