People behind importation of Korean trash to be charged 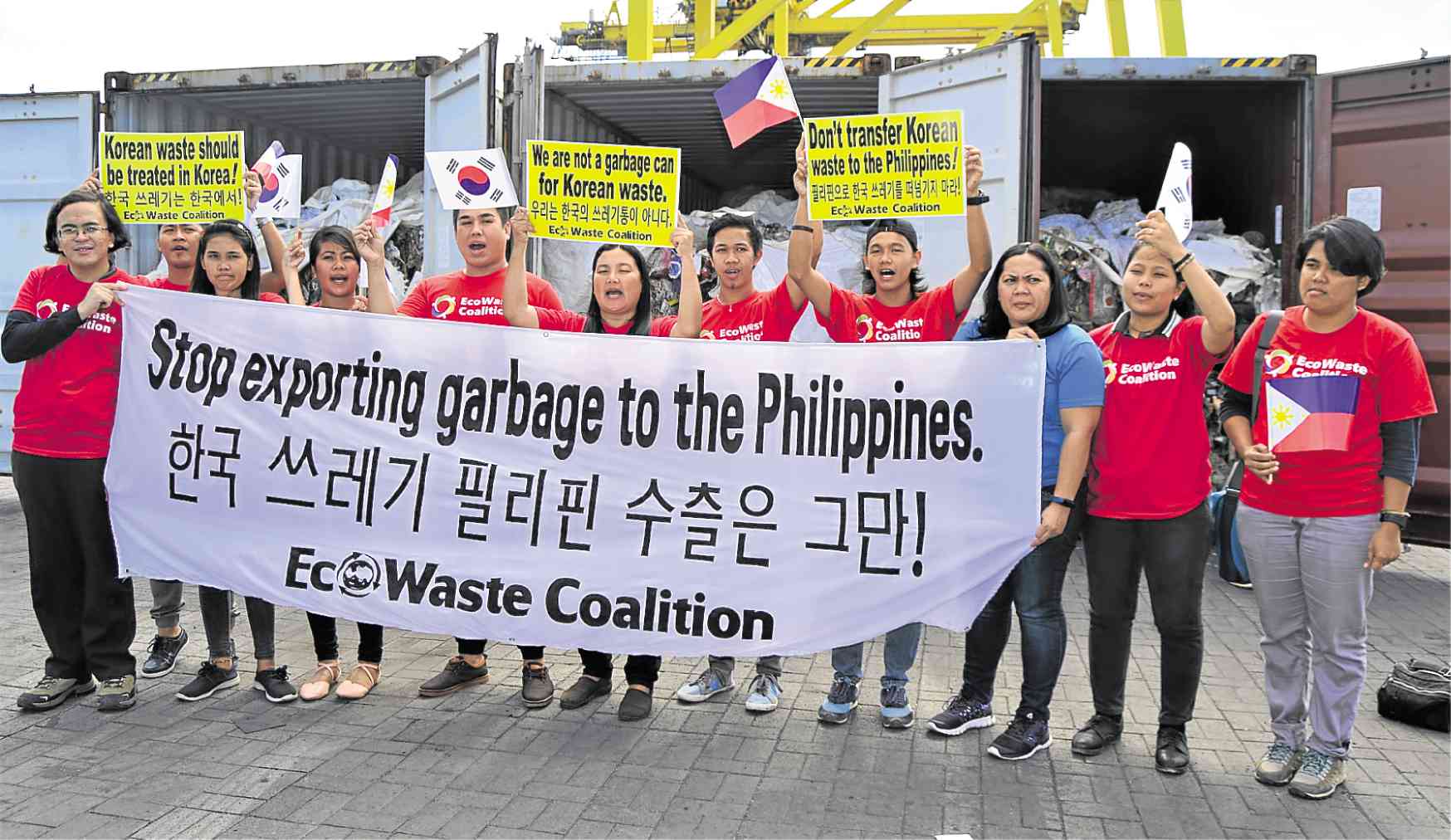 TRASH TALK Members of the environmental group EcoWaste Coalition protest the entry of garbage from South Korea at the Mindanao Container Terminal port in Tagoloan, Misamis Oriental, in a rally on Jan. 13. —JIGGER J. JERUSALEM

CAGAYAN DE ORO CITY— A customs official here said charges would be filed against those behind the importation of at least 6,500 tons of plastic trash following the controversial cargo’s return to Pyeongtaek City in South Korea.

Simon said it was now up to the National Bureau of Investigation (NBI) to gather evidence and establish the identity of the perpetrators.

He said whoever would be found to have violated the law would face charges.

Simon said the regional Bureau of Customs (BOC) office would extend all assistance that the regional office of the NBI would need so that its report would be thorough and complete.

The plastic garbage arrived at the MCT in Tagoloan, Misamis Oriental, from Pyeongtaek City, South Korea, in two batches last year to be used supposedly as raw material for a recycling facility owned and operated by Verde Soko Philippines Industrial Corp.

But the shipment was put on hold by authorities after the company failed to comply with requirements for permits from both the BOC and the Department of Environment and Natural Resources’ Environmental Management Bureau (EMB).

Simon said the second shipment that arrived in October was declared as “synthetic plastic flakes” but contained all sorts of discarded plastic materials.

Lawyer Abbas Lao, EMB regional legal officer, said the EMB had not issued any import permit to Verde Soko as the firm has yet to comply with all the requirements.

EMB must issue the import permit to Verde Soko before the company was allowed to bring the plastic trash to the Philippines.

On Sunday, Jan. 13, the 51 containers, or 1,500 metric tons, of trash that were stored inside Phividec Industrial Estate facility in Tagoloan were shipped back to South Korea.

Simon said MV Kalliroe V8525 that carried the garbage left the MCT port late on Sunday night and was expected to reach its country of origin after 10 days.

The reshipment, he said, was realized through an agreement between the South Korean and Philippine governments last month.

South Korea promised to shoulder all the expenses for the cargo’s return.

The remaining garbage being stored at Verde Soko compound will be shipped back to South Korea by the end of January or early in February, according to Simon.

At a committee hearing by the Misamis Oriental provincial board on Nov. 15, Neil Alburo, Verde Soko president, gave assurance that his company would ship the plastic trash back to South Korea.

In a statement posted on its website, the South Korean Embassy in Manila quoted its Ministry of Environment and the Korean Customs Services as confirming that the trash that was exported to the Philippines “had not gone through the proper recycling process and were different from its export declaration.”

The statement said “documents required for export was forged. They have taken measures against related violations of law.”