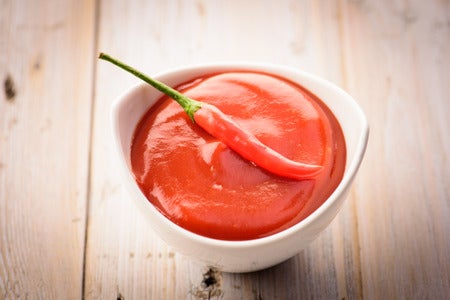 A dad from Stockton-on-tees, England got a surprise visit from police after apparently making a joke on Facebook that he fed his 5-day-old son hot sauce.

Paul Dawson shared that the incident stemmed from his post about what happened that day with his baby Ben, as reported by The Daily Mirror on Sunday, Jan. 13.

The 39-year-old said he and his partner Lorencia decided to eat out. While they were at a restaurant, she was breastfeeding the baby, and he was eating hot wings.

His wife then told him she wanted to eat, so he offered to carry the baby after wiping his hands on a napkin. He added the baby “wasn’t too happy and not feeding anymore,” so he put his knuckle in Ben’s mouth trying to pacify him — apparently forgetting what he had eaten before.

“Ben made a funny face and that was that,” Dawson wrote in his Facebook post cited in the report. “Apparently five-day-old babies don’t like it when their dads put their fingers in their mouths after eating hot wings. Unintentionally by the way. Lol.”

On Tuesday, Jan. 8, he got a surprise when he was paid a visit by the local Cleveland Police. “I opened the door and asked what was up. They replied ‘You don’t know then?’ and I said I didn’t have a clue,” Dawson said.

When they told him that it was due to him apparently feeding his son hot sauce, he called his partner to help explain the situation.

“I was actually quite tearful that someone had called the police,” he added. “My girlfriend then asked the officers if they’d even read the Facebook post.”

Police admitted they had not read the post. When Dawson showed it to them, the report stated they looked “embarrassed.” “They apologized and admitted that they shouldn’t have been called and then left,” he said.

A spokesperson for the Cleveland Police confirmed that two officers had made a visit to Dawson’s house, responding to a call from someone.

“Officers were satisfied that the baby was safe and well and there were no further inquiries carried out,” the spokesperson said. Katrina Hallare/JB