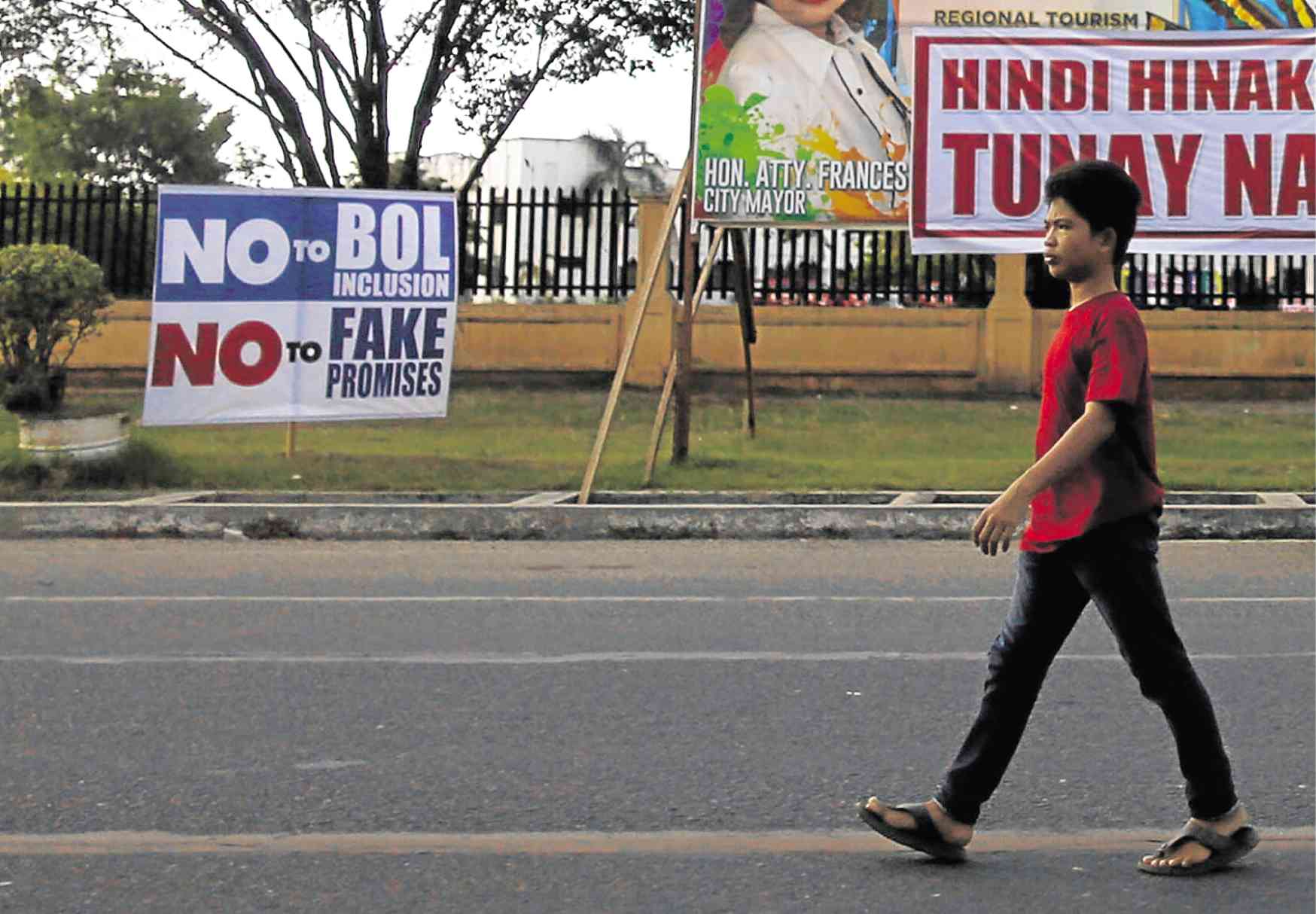 SAYING NO Streamers opposing the Bangsamoro Organic Law are seen in Cotabato City, where voters twice rejected their inclusion in the autonomous region in Muslim Mindanao. JEOFFREY MAITEM

Maj. Arvin Encinas, spokesperson for the Army’s 6th Infantry Division, said on Wednesday that the Armed Forces of the Philippines had intensified security patrol in the so-called “SPMS box” to prevent the Bangsamoro Islamic Freedom Fighters (BIFF) from sabotaging the plebiscite.

The military has deployed five battalions, or around 2,500 soldiers, from the 603rd Infantry Brigade to Cotabato City, which has been placed under the control of the Commission on Elections (Comelec), Encinas said.

The police earlier sent 400 policemen to Cotabato. Encinas said an additional battalion of the elite police Special Action Forces would also be deployed.

On New Year’s Eve, a bomb explosion killed two people and wounded 34 others in Cotabato City, where local officials were opposed to its inclusion to the future Bangsamoro Autonomous Region in Muslim Mindanao (BARMM).

The BARMM will replace the 28-year-old Autonomous Region in Muslim Mindanao (ARMM) once the BOL is ratified.

All areas under the ARMM and Cotabato City and Isabela City in Basilan province will vote on Jan. 21. Cotabato City, where the offices of ARMM are based, had twice rejected inclusion in the autonomous Muslim region.

The Comelec also set a plebiscite on Feb. 6 for voters in Lanao del Norte, six towns in North Cotabato and other areas that petitioned for inclusion in the future BARMM.

Encinas said security measures in Cotabato City, which is surrounded by Maguindanao towns, have already been strengthened as the plebiscite draws near.

Von Al Haq, spokesperson for the Bangsamoro Islamic Armed Forces (BIAF), the MILF’s armed wing, said they were also closely watching the movements of the BIFF in the SPMS box and other areas of Maguindanao.

He said the BIAF was wary the BIFF faction of Esmael Abdulmalik alias Abu Turaipe would spoil the conduct of the plebiscite in the Liguasan Marsh area.

“Nevertheless, the MILF-BIAF is on standby and ready to assist the military should they need help in securing the plebiscite especially in remote areas,” he said.