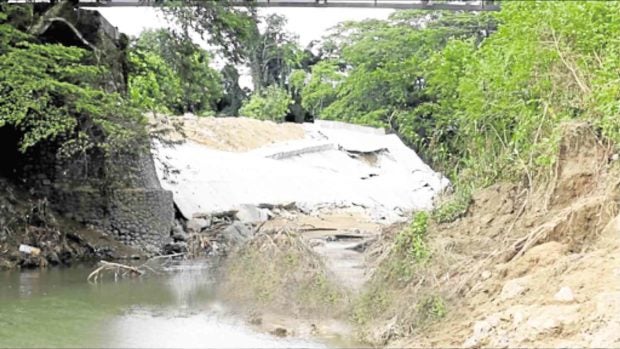 COLLAPSE A week after the Laoag flood control project was reported completed on July 11, 2018, it “collapsed like a fallen curtain,” according to a former Ilocos Norte board member. —PHOTO COURTESY OF SEN. PANFILO LACSON’S OFFICE

LAOAG CITY — A Department of Public Works and Highways (DPWH) official on Tuesday rejected claims that substandard materials were used in building a dike on a tributary of the Laoag River that collapsed a week after it was completed in July last year.

“It is not totally substandard but there are some parts [of the dike that] were not perfectly done, causing it to collapse,” said Robert Rabago, head of the maintenance division of the DPWH Ilocos Norte first engineering district.

The flood control system served the villages of Bacsil, Lataag and San Mateo in Laoag.

Rabago said a 40-year-old dam used to be the catch basin for floodwaters in the area, and irrigated farms in the western part of the city.

‘We are just humans’

“A soil exploration was conducted before the construction of the dike, but somehow we are just humans. The foundation is above the debris or fragments scattered around and it may have been loosened by prolonged monsoon rains,” he said.

“One week after construction, it caved in,” Sen. Panfilo Lacson told Inquirer editors and reporters in a briefing on troubled public works projects in December last year.

Lacson spoke about the waste of taxpayer money on infrastructure projects funded by pork.

In such projects, Lacson said, contractors plow 10 percent of the project cost back to politicians and 5 percent to the implementing agency then scrimp on materials to make a profit.

The dike on the Laoag River tributary was such a project, Lacson said.

Former Ilocos Norte Board Member Melvin dela Cuesta, who inspected and photographed the site, said on Facebook on Aug. 30, 2018, that the dike was substandard and that an investigation was in order.

When the Inquirer visited the site on Monday afternoon, it saw the part of the dike that had collapsed already restored.

In August last year, the Ilocos Norte Provincial Board investigated the construction of dikes, roads and bridge approaches in Sarrat, Pasuquin, Bacarra, Vintar, Solsona and Badoc towns that were damaged by monsoon rains.

The board declared district engineer Nestor Pasion persona non grata for ignoring invitations to the inquiry.