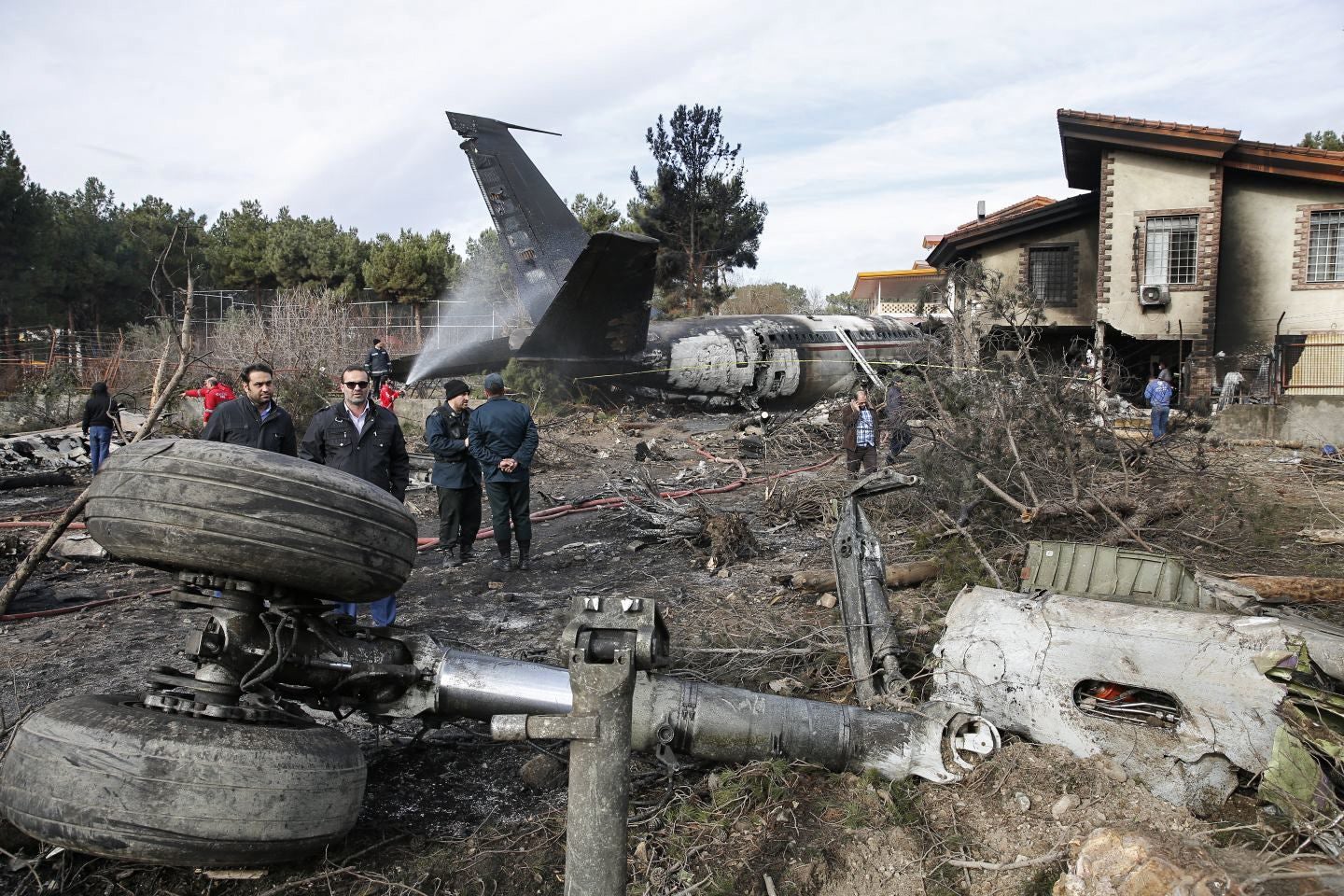 People gather amid the debris of a Boeing 707 cargo plane that reportedly crashed into a residential complex near the Iranian capital Tehran with at least 10 people onboard on January 14, 2019. – The plane overshot the runway during its landing, Iran’s aviation organisation spokesman Reza Jafarzadeh told state broadcaster IRIB. (Photo by HASAN SHIRVANI / various sources / AFP)

The plane was carrying meat from Bishkek in Kyrgyzstan when it crashed near the capital Tehran, an army spokesman told state TV, adding that only the flight engineer survived.

“The plane had 16 passengers, 14 of whom were the army crew and two were civilians; 15 were martyred,” spokesman Amir Taghikhani said. “One, the flight engineer, was injured and is currently in hospital.”

The charred remains of a plane’s fuselage with Iranian Air Force colors, its nose wedged through the wall of what appeared to be a house, were seen in photographs obtained by AFP.

Wreckage, including a landing gear and a mangled jet engine, were scattered nearby.

“A (Boeing) cargo 707 place carrying meat took off from Bishkek in Kyrgyzstan and had an emergency landing at Fath airport this morning,” the army said earlier in a statement on its website.

“It exited the runway during the landing and caught fire after hitting the wall at the end of the runway,” it added.

Fath airport is in Alborz province, just northwest of Tehran.

The Fars news agency, considered close to the military, earlier said there were 16 people onboard and that only the flight engineer had survived.

Pictures published by local media showed the charred carcasses of the animals on board, still smoldering inside one of the buildings the plane smashed into.

Fars carried a video showing emergency teams cutting through the aircraft’s nose, which had penetrated what it said was an empty residential complex.

Iran’s ageing air fleet has had a string of crashes in recent years.

Iran’s Aseman Airlines was ordered to ground its fleet of ATR planes in February last year after one of them crashed in the Zagros mountains, killing all 66 people onboard.

Iran has been subject to tough US sanctions for years, hindering the purchase of new aeroplanes and critical spare parts for the US-made planes in its air force, civilian flag carrier Iran Air and domestic airlines.

Hopes for a change in the situation were dashed last May when Washington pulled out of a landmark 2015 deal over Iran’s nuclear program, re-imposing sanctions that had been lifted as part of the multilateral accord. /kga