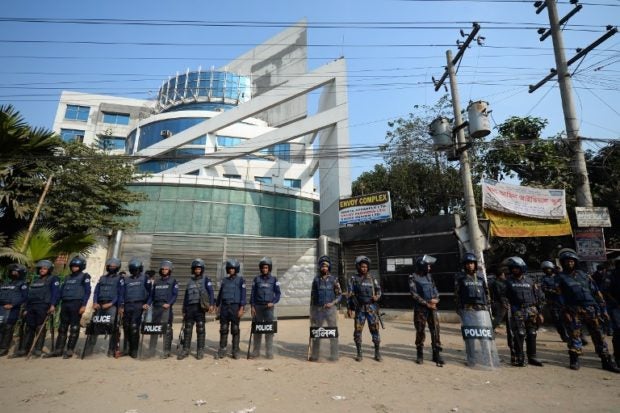 Bangladeshi police stand guard in front of a garment factory in Ashulia on the outskirts of Dhaka on January 14, 2019. AFP

BANGLADESH — Thousands of Bangladeshi garment workers downed tools and walked out of clothing factories Monday, refusing to end a week-long strike over wages and rejecting government efforts to end the standoff.

Unlike previous days, there were no reports of violence. One worker was killed last week after police fired rubber bullets and tear gas at some 5,000 protesters.

In Ashulia, near the capital Dhaka, armored personnel carriers and hundreds of police guarded factories in the country’s largest garment hub.

A message broadcast over loudspeakers urged protesters to return to work: “A list is being prepared of those who are roaming around. No violence will be tolerated.”

As the strike entered a second week Sunday, the government brokered a deal between unions and manufacturers to end the dispute, agreeing to raise wages for mid-tier tailors.

But some received hikes of little more than 20 taka ($0.25) a month, angering many tailors who churn out boutique clothing for high-end fashion lines overseas.

Some workers joining Monday’s protests expressed anger over the heavy-handed police response last week and accused factory bosses of withholding pay from those who joined the strike.

“We’re not getting paid for the last week, that’s why we walked out,” Mitali Begum, another labourer, told AFP.

The protests are the first major test for Prime Minister Sheikh Hasina since winning a fourth term in the December 30 elections, which were marred by violence and allegations of vote rigging and intimidation.

Last year, Bangladesh was the second-largest global apparel exporter after China. It has ambitious plans to expand the sector into a $50-billion-a-year industry by 2023. /ee