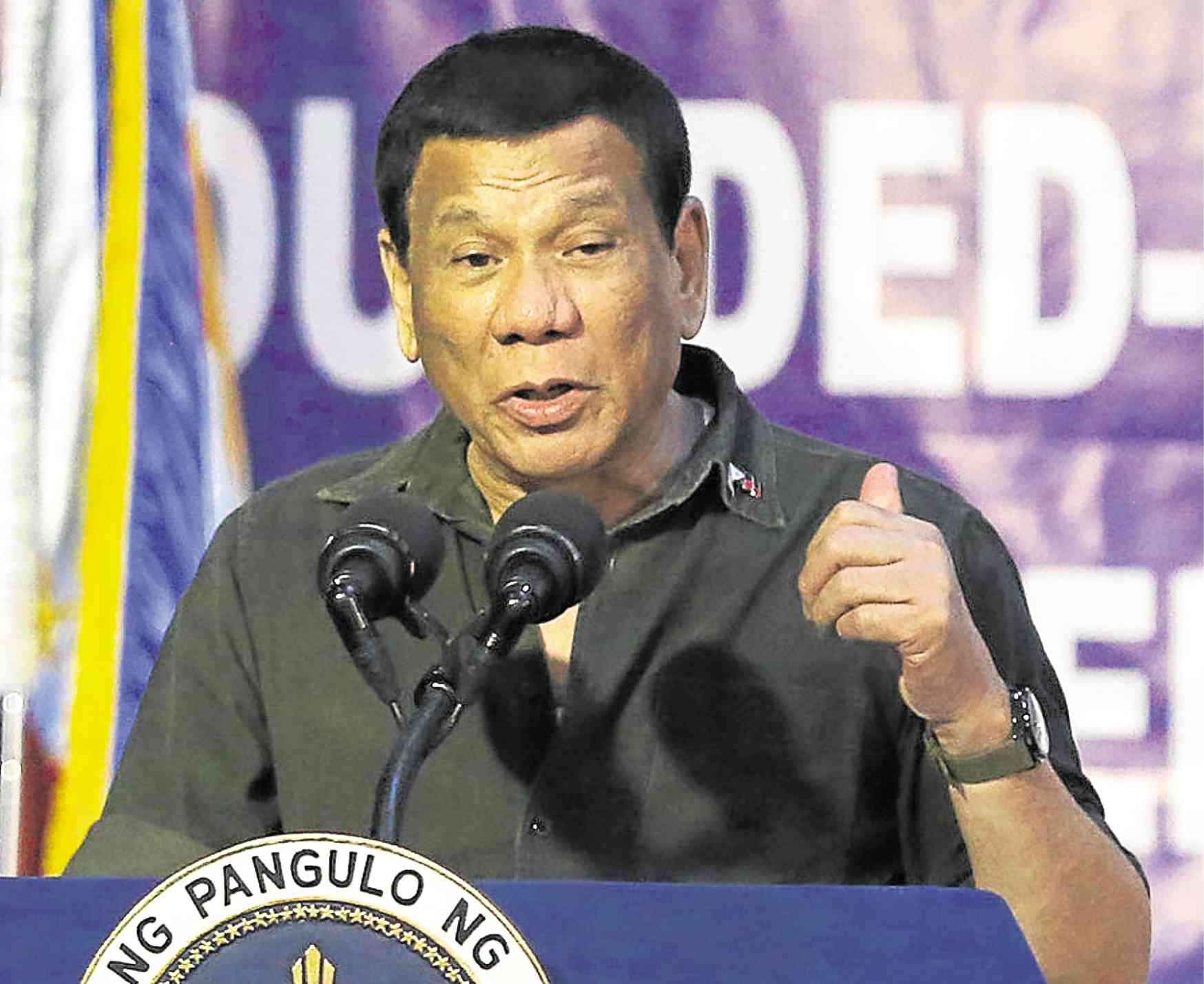 Despite a string of controversial statements and his persistent attacks against the Church and the clergy, President Rodrigo Duterte’s approval and trust ratings bounced back in December last year, a Pulse Asia survey showed.

The survey said 81 percent of Filipinos approved of Mr. Duterte’s work, up 6 points, while 76 percent expressed trust in him, up 4 points.

Presidential spokesperson Salvador Panelo said the survey was “another repudiation of the critics and detractors who don’t see or refuse to see the good in whatever the Chief Executive does and says.”

“Their loud hysterical harping and assaulting the administration with their accusations and condemnation are in sharp contrast to the clamor of the Filipinos for genuine and transparent change,” he said.

In the weeks leading to the Dec. 14 to 21 survey period, Mr. Duterte verbally attacked Catholic prelates and drew criticisms for skipping meetings to take naps during the Southeast Asian leaders summit in Singapore.

Later, he admitted using marijuana to keep awake and threatened to form his own death squad to hunt down communist rebels and their sympathizers.

Mr. Duterte’s ratings improved from September last year, when he got an approval score of 75 percent and trust score of 72 percent, both his lowest since September 2016.

“The survey results underscore that our people fully believe in the methods undertaken by the President in running the bureaucracy and the country, including formulating judgments during particular situations and events where Filipino people’s lives and the country’s economy are at stake,” Panelo said.

Communications Secretary Martin Andanar added that Mr. Duterte’s high approval and trust ratings were “a testament to how this administration is attuned to the needs of the greater majority.”

Robredo obtained a national approval rating of 62 percent from 61 percent in September, and a trust rating of 56 percent, unchanged from September.

Speaker Gloria Macapagal-Arroyo, whose performance was rated for the first time since assuming House leadership on July 23 last year, got an approval score of 27 percent—the lowest among the country’s four top officials.

Arroyo’s trust rating, meanwhile, improved from 19 percent in September to 21 percent in December.

She just brushed off the survey results, saying the ratings “were not new” to her.

“Remember, I was pilloried very much when I [was] President,” Arroyo told reporters during a visit to Pampanga’s Sasmuan town on Friday.

Pulse Asia interviewed 1,800 adults for the poll, which had a margin of error of plus or minus 2.3 percentage points.

Between September and December, the President’s ratings rose across socioeconomic classes and geographic areas, except Metro Manila.

Mr. Duterte’s ratings increased the most in Luzon outside Metro Manila where his approval score went up from 66 percent to 74 percent, and his trust rating rose from 64 percent to 69 percent.

His approval and trust scores in Mindanao, his bailiwick, remained the highest at 96 percent and 91 percent, respectively.

By social class, the biggest improvement came from members of classes ABC, who gave him an approval rating of 87 percent, up 15 points, and a trust rating of 79 percent from 73 percent.

Robredo got higher approval ratings in all classes and areas, except in Metro Manila where her score fell 7 points to 42 percent.

Sotto enjoyed majority approval and trust ratings in all areas and classes. His approval scores ranged from 66 percent to 77 percent with trust scores of 60 percent to 73 percent.

The latest survey also recorded higher ratings for the Senate and the House of Representatives with the majority approving the performance and trusting these institutions.

The Senate’s approval rating rose to 69 percent from 63 percent in September and its trust rating was up 65 percent from 61 percent.

The House of Representatives scored an approval rating of 66 percent, a 10-point increase from September. It got a trust rating of 64 percent from 58 percent.

The approval rating of the Supreme Court also went up 12 points to 64 percent and its trust rating improved to 62 percent from 54 percent. —WITH REPORTS FROM JULIE M. AURELIO AND PATHRICIA ANN V. ROXAS