Teachers next in line for salary increase—Duterte 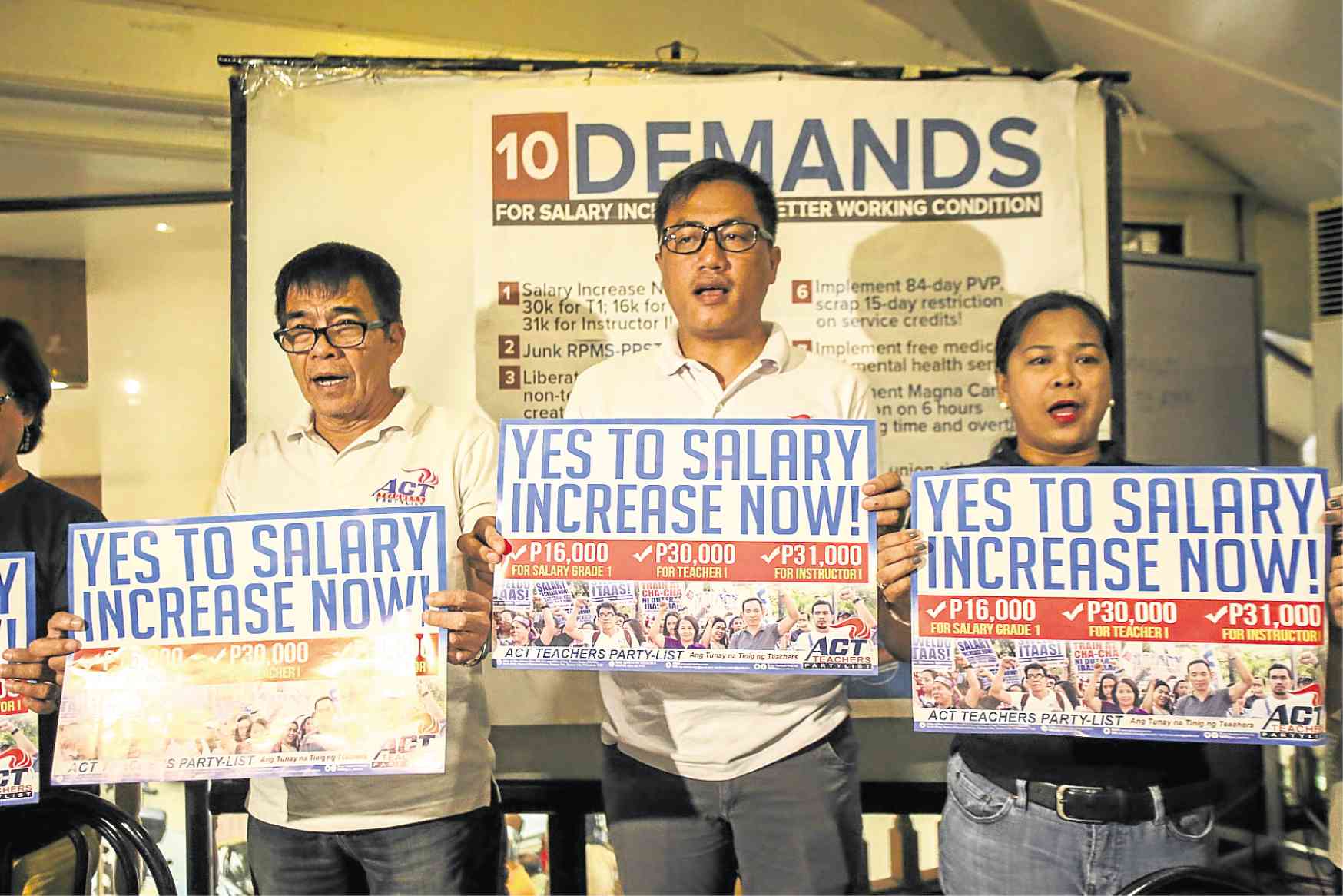 OUR TURN Members of the Alliance of Concerned Teachers demand the release of the last tranche of the salary increase promised to teachers by the government. —JAM STA ROSA

BULAKAN, BULACAN—After police officers and soldiers, teachers are next in line for a salary increase, President Duterte promised on Thursday.

“I will make sure you are next. You are the most numerous,” Mr. Duterte said during the groundbreaking rites of Gen. Gregorio del Pilar National High School at Barangay Sta. Ana here.

The President said he was willing to meet with teachers’ representatives in Malacañang and strike a deal with them in the presence of Education Secretary Leonor Briones.

“You can choose the date, January. Just make it fast, then we can make an agreement or manifesto, choose whatever kind of document,” he said.

But he will not meet with teachers affiliated with Leftist groups, Mr. Duterte said, adding: “I don’t like the Left. They say they are not communists, but who are we fooling?”

This week, a memorandum surfaced ordering police to “conduct an inventory” of all educators who are members of the progressive group Alliance of Concerned Teachers (ACT).

The memo followed an earlier monitoring of schools by the military, which said that under an alleged “Red October” plot, students were being recruited by rebel groups.

The President assured teachers that he had already discussed the planned salary increase with Budget Secretary Benjamin Diokno.

But Briones clarified later that, whether the promised increase came through or not, teachers would still get a raise this year under the fourth and last tranche of salary increases for government employees.

“If there is any addition to that [pay increase], it’s really up to [the President]. But with or without that, there’s the last tranche [of increases] coming,” Briones said.

Under Executive Order No. 201, which was signed by former President Benigno Aquino III in February 2016, teachers and other civilian personnel in the government’s executive, legislative and judicial branches were granted a graduated raise in salaries to be given in four tranches, with the last tranche scheduled on Jan. 1, 2019.

In a statement released on Friday, the Department of Budget and Management (DBM) said the fourth and last tranche of the salary increase for government workers would be released in February.

“[T]he DBM chief assured that the fourth tranche salary adjustment will be implemented by February and that government employees will be entitled to their salary differential,” the DBM said.

It added that the DBM expected the General Appropriations Act to be signed in the first week of February since Congress had made pronouncements that the budget bill would be their top priority once it resumes session next week.

Lawmakers have called on the President to release the last tranche of salary increases for government employees, which will cover public school teachers.

In the same event, the President threatened to kill loan sharks engaged in the usurious “5-6” lending scheme that many teachers turn to to make ends meet.

Because his own mother, Soledad, was a retired school supervisor, Mr. Duterte said he knew firsthand the financial woes that force many teachers to resort to “5-6” loans.

“That’s why I know that 5-6. That is the system I want to kill. If I cannot kill the system, maybe we can kill the one who brings the ‘5-6.’ That’s easier,” the President said of lenders in the money-lending scheme whose high interest rates have pushed many poor Filipinos deeper into debt.

In 2016, Mr. Duterte ordered a crackdown on the practice and warned foreigners involved in “5-6” that they would be arrested and deported.

“They keep on adding [to] your debts so you are in perpetual bondage … The [borrower becomes] a slave working for you, or for your money,” he said.

“So I told them, you better stop it. If you lend the money, [it’s all right to get] back the payment. But if you add, I will kill you,” the President said.