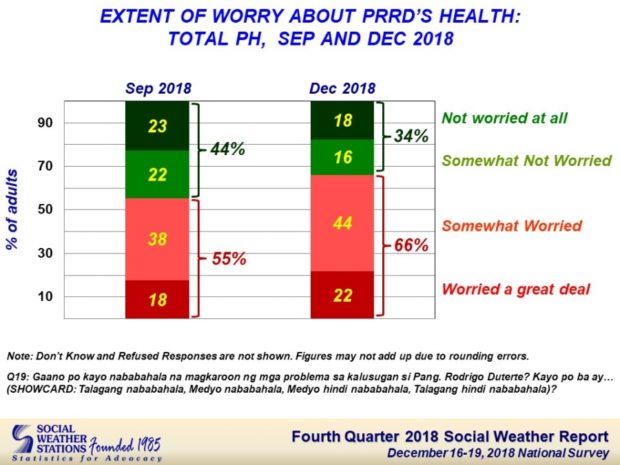 In a survey conducted from Dec. 16 to 18, 2018, SWS said 66 percent of Filipinos were worried about the President’s health, up 11 points from the 55 percent who reported the same in the September 2018 survey.

Twenty-two percent of this number said they were worried  a “great deal” while 44 percent were just somewhat worried about the Duterte’s health.

The pollster also found that more Filipinos believe that Duterte has health problems (49 percent) while 24 percent saying they do not believe that. Some 20 percent were undecided.

This is a 6-point increase from September 2018’s survey result, with 45 percent saying then that they believe and 26 percent do not believe that Duterte has health issues.

The SWS conducted nationwide interviews with 1,440 adults aged 18 years and above. Of the number, 360 each were from Balance Luzon, Metro Manila, Visayas, and Mindanao.

The survey had a sampling error margins of ±2.6 percent for national percentages, and ±5 percent each for Balance Luzon, Metro Manila, Visayas, and Mindanao.