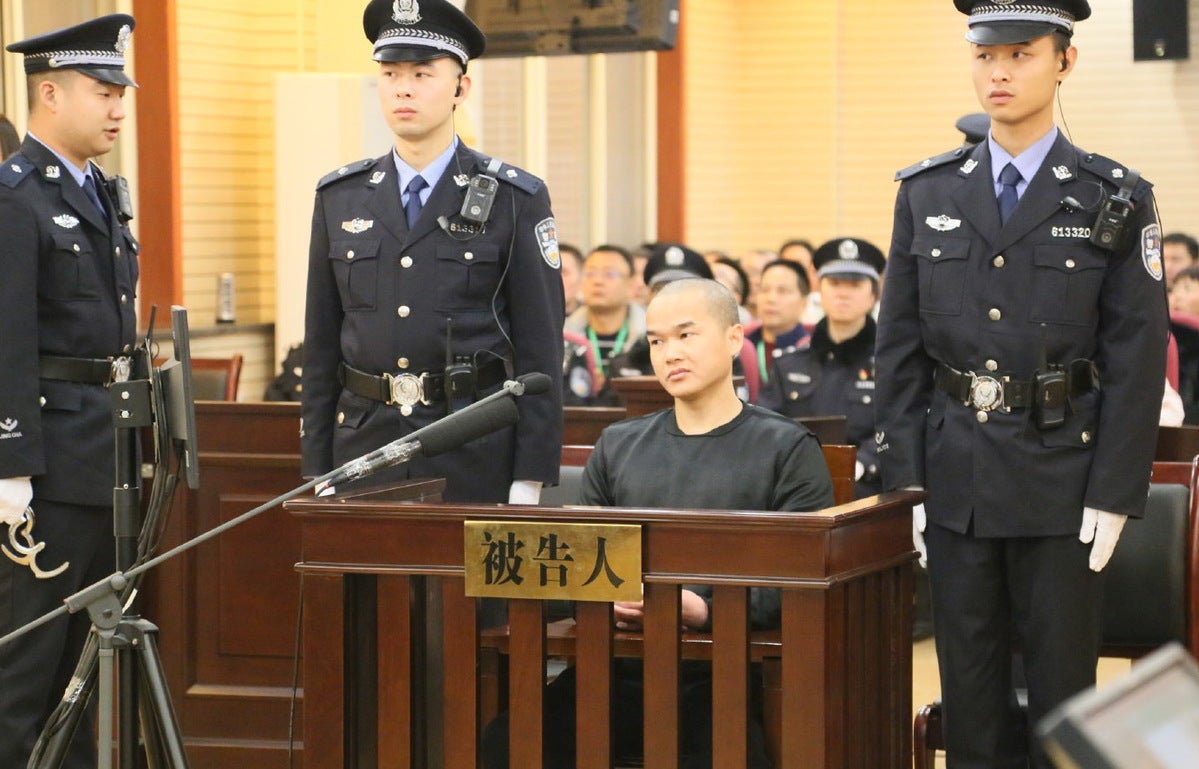 Zhang Koukou is tried at Hanzhong Intermediate People’s Court in Shaanxi province on Tuesday. He was convicted of intentional homicide and property destruction. CHINA DAILY

BEIJING — A man from Hanzhong, Shaanxi province, was sentenced to death on Tuesday for killing three neighbors in revenge for his mother’s death, a local court said.

Zhang Koukou, 36, stabbed Wang Zixin and two of his sons, Wang Zhengjun and Wang Xiaojun, to death on Feb 15 and then set fire to Wang Xiaojun’s car, according to the Hanzhong Intermediate People’s Court.

Zhang was detained two days later when he turned himself in to police.

“The defendant committed the crimes of intentional homicide and property destruction,” the court said. “Although he surrendered, we still decided not to give him lenient punishment for his cruel behavior, which have had great negative effects on society.”

Zhang said he was unhappy with the ruling and would appeal to a higher court.

The case aroused public attention after it was reported in the media that Zhang acted in revenge for the death of his mother, who had been seriously injured with a stick by Wang Zhengjun, the third son of Wang’s family, during a quarrel in August 1996.

Four months later, Wang Zhengjun, then 17, was sentenced to seven years in prison for intentional injury and was ordered to pay more than 9,600 yuan ($1,510) in compensation.

Standing trial on Tuesday, Zhang confessed that for two decades he never gave up the idea of getting revenge for the attack on his mother.

“If Wang Zhengjun hadn’t beaten my mother, I wouldn’t have lost her. I was dogged by her death over the years,” he said. “My mind went blank and I couldn’t control myself when I saw the brothers on Feb 15 last year. They reminded me of my mother’s death.”

Prosecutors said during the public hearing that Zhang followed the brothers as they made their way home and used a knife to stab the two men several times.

He later went to the Wangs’ residence and killed the father, Wang Zixin, 70, and set Wang Xiaojun’s car on fire with gasoline, prosecutors said.

“The defendant was upset and angry with the Wang family,” the court said in the ruling, adding he committed the offenses with sufficient preparation.

Members of Zhang’s family said they had not been satisfied with the sentence given to Wang Zhengjun more than 20 years ago.

Zhang Furu, the defendant’s father, added that it was the Wang family that let the son, who was a minor, take the blame and get a lenient penalty because of his age.

Zhang’s family had applied to the intermediate court and the provincial high court last year for a retrial of the 1996 assault, but the application was rejected.