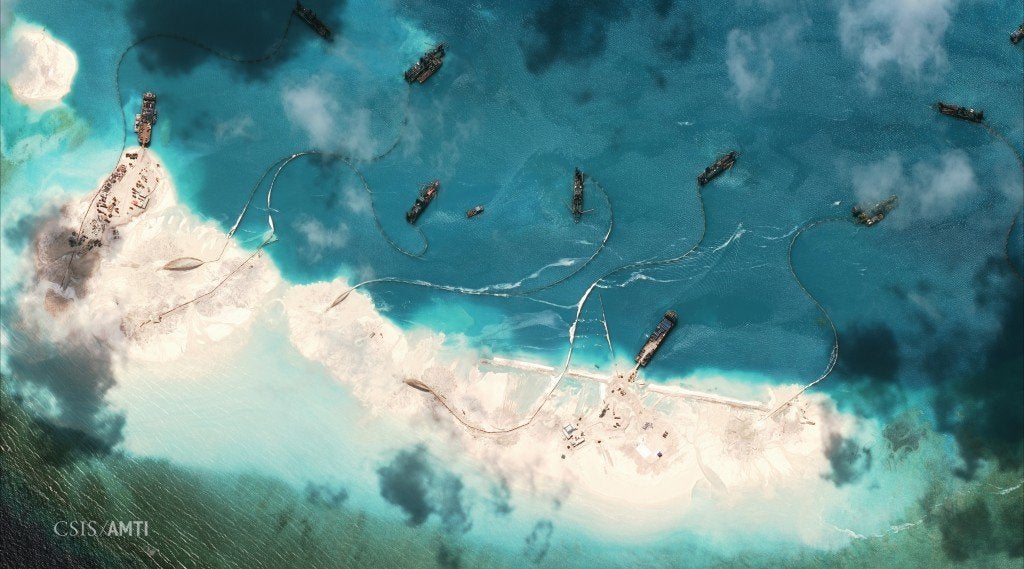 This photo released by Asia Maritime Transparency Initiative in 2015 shows dredging work being done by China along the Panganiban Reef (Mischief Reef).

MANILA, Philippines — Magdalo party-list Rep. Gary Alejano called on the government to keep an eye on China’s latest initiative to restore coral reefs destroyed from its island-building in the South China Sea.

While the project was laudable, Alejano said government should still interfere in the undertaking being one of the claimants in the contested waterway, adding China could end up occupying new areas.

“The intention of China to rehabilitate the coral reefs it massively destroyed is laudable, but let us not forget that there is an existing territorial conflict. Dapat makialam ang gobyerno natin sa proyektong ito dahil isa tayo sa claimants ng mga teritoryo sa South China Sea. This rehab project could be just one of the many ways of China’s occupation,” the lawmaker said in a statement on Wednesday.

China recently announced it has started recovery work on Panganiban (Mischief), Kagitingan (Fiery Cross) and Zamora (Subi) reefs – three of its biggest artificial outposts in the Spratly archipelago that are also being claimed by the Philippines.

It is also identifying other areas where it could carry out similar work.

Doing the initiative unilaterally, the lawmaker said, was a sign of “clear disrespect” to the Philippines as one of the claimants.

An international tribunal ruled in 2016 that “China had caused severe harm to the coral reef environment,” in its large-scale reclamation and construction of artificial islands in the South China Sea.

The same court ruling invalidated China’s nine-dash line claims in the South China Sea, but the Asian superpower ignored the verdict and continued its island-building.