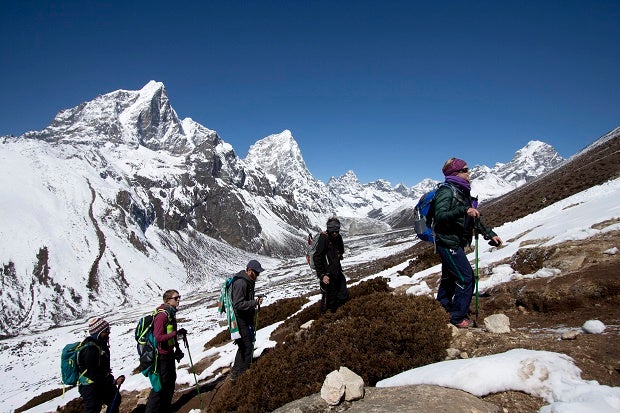 In this March 18, 2015 file photo, trekkers take an acclimatization hike to Nagarzhang peak above Dingboche valley on the way to Everest base camp, Nepal. AP FILE PHOTO

KATHMANDU — Arrivals in Nepal crossed the coveted one-million mark for the first time in 2018 with 1.17 million foreign tourists streaming into the country. According to the Nepal Tourism Board, Nepal tourism reached the magic figure due to a jump in arrivals from India, China, the US, Sri Lanka and the UK.

The number of tourists visiting Nepal recorded a 24.77 percent growth over last year. Among the total arrivals, 969,287 individuals came by air. Arrivals from Nepal’s southern neighbor grew 25.1 percent to 200,438 individuals. Indian tourists who travel to Nepal overland are not included in the tourism statistics.

The board said that arrivals from China saw the strongest growth of 46.8 percent to 153,602 individuals in 2018, largely due to increased flight frequencies between the two countries. According to the statistics, 26,694 Chinese visitors entered Nepal through the Rasuwagadhi border point.

“This remarkable growth right after the announcement of the Visit Nepal 2020 campaign has buoyed the spirits of the travel trade industry. This has prepared a sound and solid platform to achieve the target of hosting 2 million foreign tourists by 2020,” said Tourism Minister Rabindra Adhikari.

The last two months of 2018 were productive months. Nepal received a record 147,859 tourists in November, up 48 percent year-on-year.

The December or winter season saw 121,620 tourists. In the past, tourists usually returned home to celebrate Christmas and New Year’s Day during this season, and it was considered the offseason in Nepal. The board said that the last two months of 2018 alone recorded a 47 percent increase in tourist arrivals year-on-year.

Deepak Raj Joshi, chief executive officer of the Nepal Tourism Board, said that the consecutive growth in tourist arrivals in the last three years had instilled confidence in tourism stakeholders.

“This growth was made possible by the synergy in our efforts and the spirit of partnership with the private sector that we have cherished since the very beginning,” he said, adding that working closely with the private sector would take tourism to new heights. The number of tourists from the US has been growing at a fast rate, making it the third largest source market. Arrivals from the US grew 16 percent to 91,785 individuals. Arrivals from Sri Lanka soared 55.7 percent to 70,610. Arrivals from South Asia registered the strongest growth of 26.4 percent to 301,963 individuals.

Tourism, one of the major contributors to Nepal’s Gross Domestic Product, was severely affected after the earthquakes of 2015 as travelers stayed away. That year, tourist numbers plummeted to 539,000, a loss of almost a third. Before the earthquake in 2014, Nepal had received 790,000 tourists.