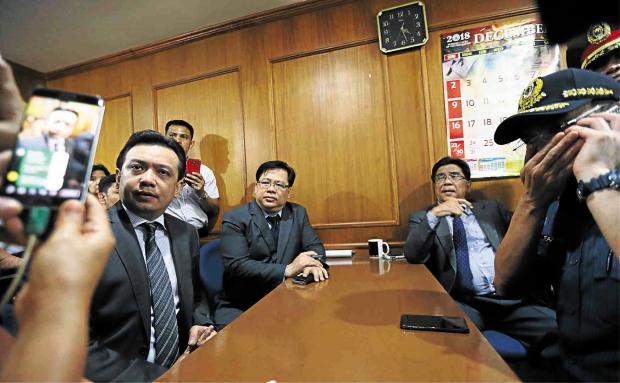 MANILA, Philippines — The warrant of arrest issued against Sen. Antonio Trillanes IV will stay after the Makati City Regional Trial Court Branch 150 dismissed the appeal filed by the senator.

Makati RTC Branch 150 is handling the rebellion case filed against Trillanes in connection with the 2007 Manila Peninsula siege.

Last Sept. 25, 2018, Makati RTC Branch 150 Judge Elmo Alameda ruled that there was “factual and legal basis” for the Proclamation No. 572 issued by President Rodrigo Duterte revoking the amnesty given to Trillanes by then President Benigno Aquino III.

“This court found the granted amnesty to former Lieutenant Senior Grade [now Senator] Antonio Trillanes IV. This court found the existence of factual and legal basis for the issuance of said proclamation by President Duterte,” the court said in the Sept. 25 order issued by Alameda.

“With the revocation of the amnesty to Sen. Trillanes, the resulting consequence is that the Order issued on September 7, 2011 dismissing the case of rebellion becomes void ab initio,” the court further stated.

Trillanes filed a motion for reconsideration.

In dismissing the motion, the court, in an order dated Dec. 18, 2018 but was released to the media Monday, said Trillanes failed to raise new issues that would warrant a reversal of its Sept. 25, 2018 order.

“The matters raised therein have been thoroughly and exhaustively passed upon by this court,” the court said.

The court is not convinced that there is still a need to conduct a reception of evidence to rule on the factual issues on the case referring to the question on whether he applied for an amnesty or not.

“Records will clearly show that Sen. Trillanes failed to establish the existence of the official copy of the amnesty application form which is the primary evidence required as proof of its filing with the DND Ad Hoc Amnesty Committee,” the order read.

“Sen. Trillanes’ inability to present the official original copy duly stamp marked received or even a photocopy of the application form bars him from proving the alleged contents thereof. The rule requires that the highest available degree of proof must be produced by him to prove the contents thereof especially his claim that he made a narration of his admission of guilt of crime subject of the application for amnesty,” the court further stated.

The court maintained that that no other evidence should be admitted other than the original copy of the amnesty application form which was filled out by the Senator.

Alameda’s ruling is in contrast with the order issued by Makati RTC Branch 148 Judge Andres Soriano, who handles the coup d’ etat case against the Senator.

Soriano has refused to reopen the coup d’ etat case even with the revocation of amnesty given to Trillanes.

Soriano gave weight to the testimonies of officials from the Department of National Defense and the Armed Forces of the Philippines (AFP) who testified that Trillanes submitted a duly executed amnesty application form.

“It is sufficient that the party offering secondary evidence establish the existence and due execution of the document by preponderance of evidence, and the Court, in such a case may admit secondary evidence without accounting the original,” Soriano’s order stated.

The Makati RTC Branch 148 added that with the dismissal of the coup d’etat case in 2011, the court already lost its jurisdiction when it became final and executory.

The court noted that while it affirmed the validity of Proclamation 572, “the court finds itself powerless to disturb the [Doctrine of Immutability].”

The Doctrine of Immutability means that a decision that has acquired finality becomes immutable and unalterable, and may no longer be modified in any respect, even if the modification is meant to correct erroneous conclusions of fact and law.

Alameda’s ruling in effect reopened the rebellion case, but the court has yet to set a trial date.