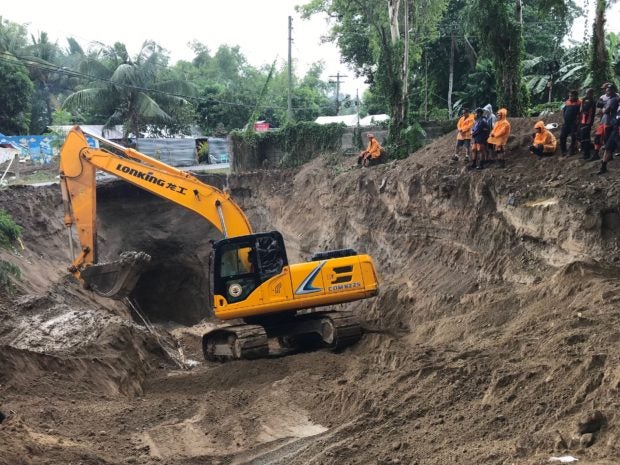 The search continues amid light rain Friday for the body of the third treasure hunter who, along with his two other companions, was buried alive in Barangay Boloc-boloc, Sibulan, Negros Oriental. PHOTO by Alex Pal/Inquirer Visayas

Strong rains in Negros Oriental almost ended the search for Feliciano Ensilay, but the search teams found his body after one more push.

Ensilay was a government employee who was about to retire in two weeks. He and his companions Bobby Baldado and Algie Javier were buried alive Wednesday noon after their tunnel, which was reinforced with weak bamboo braces, collapsed 50 feet underground.

The bodies of Baldado and Javier were dismembered and were found in an advanced stage of decomposition.

The three were part of a four-man team who had been working through the New Year searching for the fabled Yamashita Treasure.

Only one member survived the accident.

Sibulan Municipal Councilor Jun Rey Abada, who was tasked to be the spokesperson of the search team, said the local government officials will study what action to take against those responsible for the accident.

The treasure-hunting activity was reportedly financed by a certain Christine, who bought the former Day Care Center in the town a few months ago.

The treasure hunters operated in utter secrecy from inside the Day Care building that Dumaguete radio broadcaster Rex Cornelio Pipino of DYMD-FM, who lives nearby, said he never heard about until the accident happened. /ee